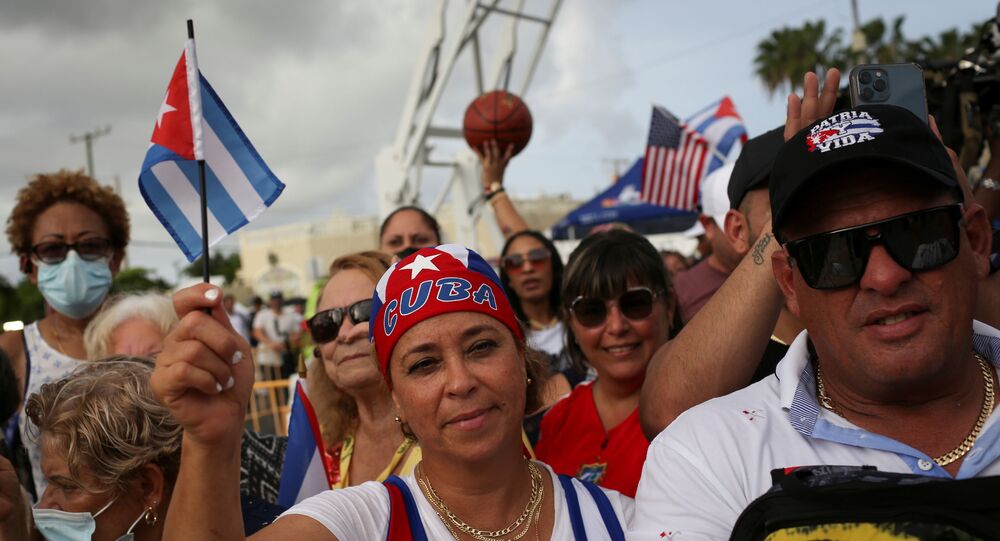 WASHINGTON (Sputnik) - Hundreds of people have gathered near the White House in Washington DC for a so-called 'SOS Cuba' rally, held in solidarity with ongoing protests on the island.

A crowd of at least a thousand people chanted "Freedom for Cuba," and sang the national anthem of Cuba, El Himno de Bayamo, as well as other Cuban songs.

The rally was peaceful and, according to some of the participants, they were no organizers. Some protesters came with small children and many were seen having picnics in a nearby park.

Small numbers of law enforcement officers were present but did not interfere with the protest.

Olivia Valdes, a Cuban residing in Miami, told Sputnik that many of the people participating in the rally had come to the US capital from Florida.

"I have been here for four days already waiting for my people to come. They finally did it, we are finally here. We are protesting so that the President [Joe Biden] can do something for the freedom of the people," Valdes said.

When asked how long they plan to continue with the protests, Valdes said, "It’s the thing form the heart. We can be here until Biden decides to do something."

Mildred Jova, a Cuban who has been living in the United States since 2007, told Sputnik that people in Cuba want a change and asked the US government to "intervene to help people who are starving."

US restrictions on trade with Cuba date to the island nation's communist revolution in the late 1950s, and involve at least a half dozen different US laws. Two-term US President Barack Obama took steps to begin the process of normalizing bilateral relations with the island, but many of those steps were reversed by the administration of Donald Trump. Over the four years of his one term, the Trump administration added 243 economic sanctions to toughen the embargo on Cuba.

On June 23, the United States voted against a UN General Assembly resolution condemning the embargo on Cuba. The UN resolution was adopted by an overwhelming majority of 184 out of 193 sovereign states.