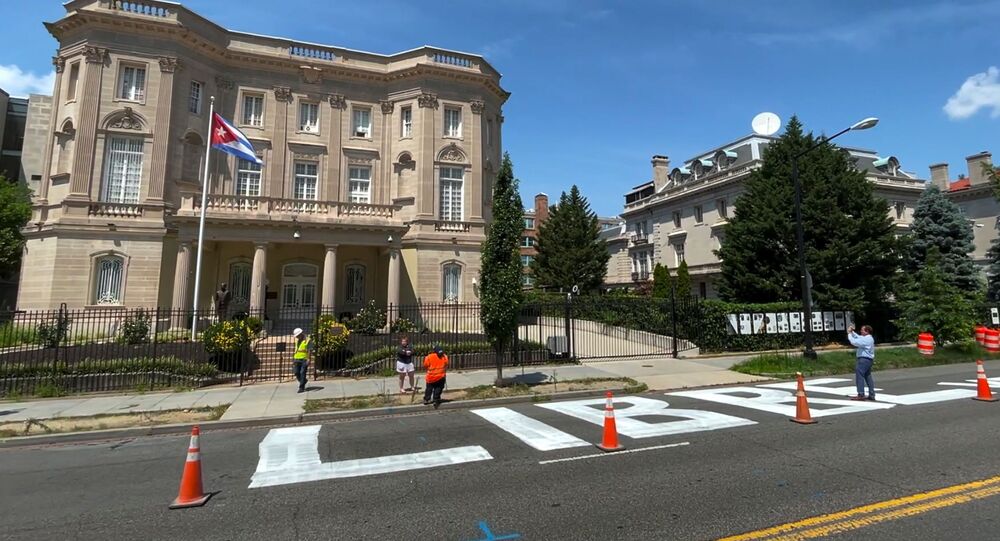 The message in front of the Cuban embassy appears amid massive nationwide protests across the Latin American country, with thousands of residents flocking to the streets in what are the largest demonstrations in the country since 1994.

A painted message reading "Cuba Libre" appeared earlier in the week on the street in front of the Cuban embassy in Washington DC - at a time when the island nation is engulfed in massive protests.

Near the graffiti, one can spot the letters "vzla", in what many see as a reference to Venezuela. According to Erica Cunningham, a spokesperson for DC's Department of Public Works, cited by the Washington Post, the writings were deemed an “unauthorized painting" and were removed by a city street-cleaning crew.

“Despite the systematic policy of confrontation and aggression of the United States government against Cuba, the American diplomats who work in the US Embassy in Havana have always been safe and have never been the object of attacks, or other manifestations of hatred. The Cuban Government expects the same behavior on the US side", embassy officials said in a statement for The WaPo.

Footage showing the message was shared online by many users.

​On 11 July, Cuba faced its largest protests since 1994, with some demonstrating against the government, demanding free elections and the resolution of life-threatening social and economic issues, while also voicing dissatisfaction with a shortage of medicines and basic necessities.

Thousands of others gathered for counter-protests in support of the government, with more than 100,000 people said to have taken to the streets to condemn last week's protests, according to the Cuban foreign ministry.

The Biden administration voiced support for the protesters, but faced criticism from many observers and activists, who argued that, instead of encouraging protests in the country, Washington should lift its sanctions and end the trade blockade that it has had in place since the 1960s. Havana, along with several other countries, accused the US of being responsible for the protests and even instigating them.