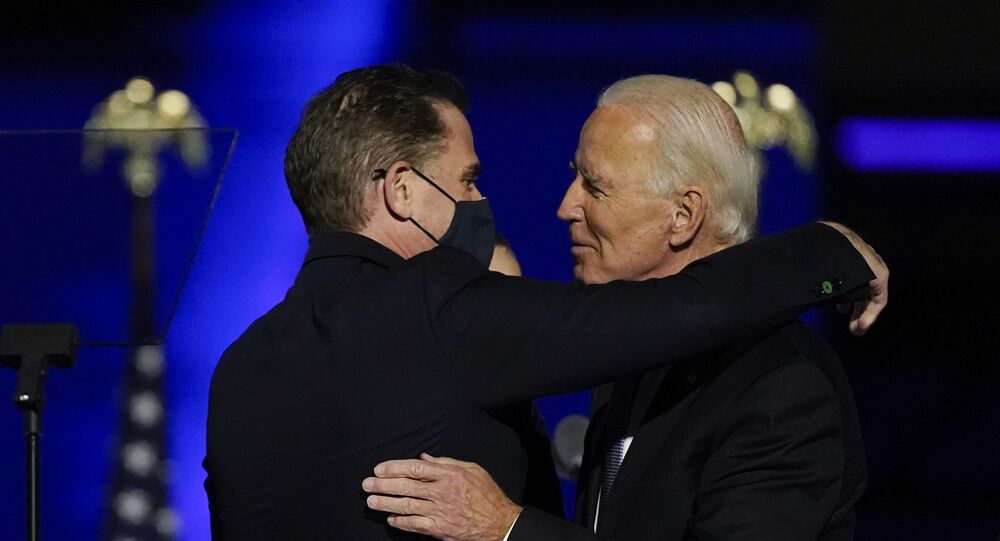 Joe Biden’s son Hunter, who is being investigated for his business deals in China and Ukraine and alleged money laundering schemes, earlier said that he is “100%” confident he will be “cleared of any wrongdoing”.

The Delaware prosecutor who is investigating Hunter Biden’s “tax affairs” chose not to seek warrants or issue grand jury subpoenas in the case prior to the November 2020 election fearing that the probe would be politicised, according to Politico’s bombshell report.

The investigation into Hunter Biden’s money exchanges with China, Ukraine and other foreign nations was launched by US Attorney's Office in Delaware at some point in 2018, but was not disclosed until several weeks after the presidential election.

As Trump’s and Biden’s presidential campaigns were in full swing last summer, investigators decided that it was time to bring the case into Hunter Biden to a new level with subpoenas and other moves. US Attorney David Weiss, however, feared that this would make the probe public and affect the presidential election, that was eventually won by Hunter’s dad Joe Biden.

“It was a close call,” a person, who was allegedly involved in the discussions and supported Weiss’ decision, told Politico. “That case has way more credibility now.”

According to the report, “no matter what he [Weiss] did, the decision was sure to come under scrutiny for signs of politicisation”.

Weiss, a Republican supporter, was appointed by Donald Trump in 2018. Following Biden's swearing-in, he was asked to stay in the position to continue the investigation into Biden’s son.

The Probe That Caught Many Off Guard

Hunter Biden, 51, publicly unveiled the probe only in December 2020 after his father had already been declared the winner of the presidential race. Hunter, who has been battling accusations of using his father’s power to get a high-profile post in Ukraine’s natural gas giant Burisma and that he was involved in money laundering schemes in China, said that he had learned about the probe only at that time.

"I learned yesterday for the first time that the US Attorney’s Office in Delaware advised my legal counsel, also yesterday, that they are investigating my tax affairs," Hunter Biden said in December.

The businessman-turned-artist added that he was sure that the review would conclude that he'd handled his foreign affairs “legally and appropriately”.

Later Hunter said in the interview with CBS News that he was “100 percent certain” that he “will be cleared of any wrongdoing” by the end of investigation.

President Biden unsurprisingly signalled support for his son. Former President Donald Trump, however, was furious over the news that his attorney general, William Barr, had kept silent on the investigation into Hunter Biden during the election cycle, calling this “a big disappointment” on Twitter.

“Why didn’t Bill Barr reveal the truth to the public, before the Election, about Hunter Biden. Joe was lying on the debate stage that nothing was wrong, or going on – Press confirmed. Big disadvantage for Republicans at the polls!,” Trump wrote on Twitter later, weeks before his page was shut down following the 6 January Capitol storming.

William Barr resigned from his post on 23 December after his departure was announced by Trump on Twitter.

© AP Photo / Jeff Roberson
In this Oct. 15, 2020, file photo Attorney General William Barr speaks during a roundtable discussion on Operation Legend, a federal program to help cities combat violent crime in St. Louis. Attorney General William Barr said Tuesday, Dec. 1, that the Justice Department has not uncovered evidence of widespread voter fraud and has seen nothing that would change the outcome of the 2020 presidential election.

Despite a call from Republicans to appoint a special prosecutor to oversee Hunter Biden’s case, Barr signalled before his leave that the step was unnecessary.

Hunter Biden and his dad are still under scrutiny over a trove of emails and documents discovered on a laptop said to have been abandoned by the president’s son in a Delaware repair shop in April 2019. Some of the findings on the “laptop from hell” – as Trump kindly put it – suggested that Hunter Biden organised a meeting between his father Joe and one of his Burisma colleagues when Joe Biden was serving as Barack Obama’s Vice President and was overseeing policy toward Ukraine. Joe Biden, who previously insisted that he had never mixed politics with his son’s business, denied the claims.

Hunter himself couldn’t confirm or deny that he was the true owner of the controversial device.