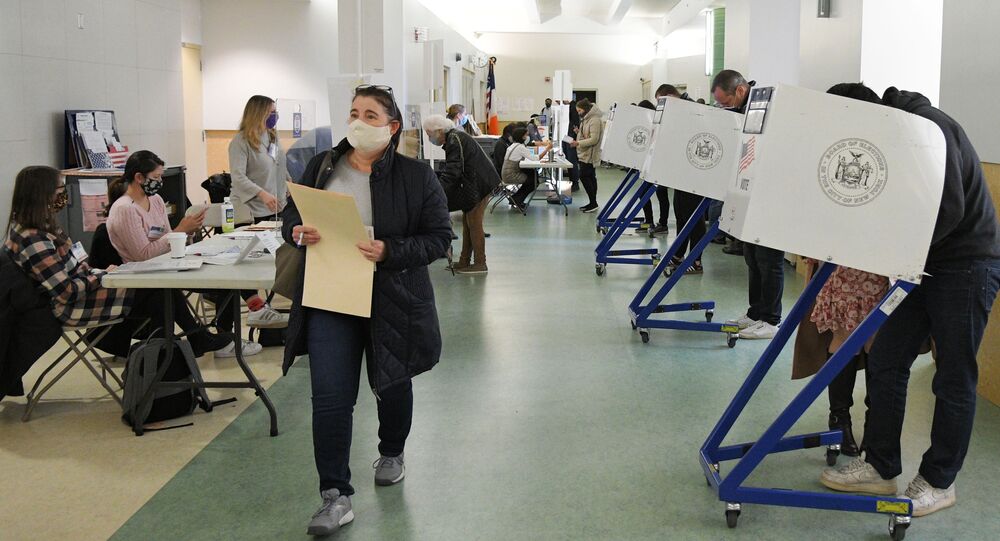 Republican lawmakers and non-partisan activists in Arizona, Georgia and Pennsylvania are continuing to push for election integrity. This week a number of discrepancies have been found by independent auditors in Arizona and Georgia, raising new questions about the outcome of the 2020 election.

The alleged 2020 election fraud saga is far from being over in Arizona, Georgia and Pennsylvania despite President Joe Biden and the US mainstream media decrying the "big lie" and downplaying vote irregularity claims.

On 13 July, Senate President Karen Fann announced that vote counts do not match in the Maricopa County 2020 election audit. The announcement was followed by hearings in the Arizona Senate which were held on 15 July. Doug Logan, CEO of Cyber Ninjas, the leading group of independent auditors, provided a preliminary overview of discrepancies found during the recount.

According to Logan, auditors could not find records concerning tens of thousands of mail-in ballots in Maricopa County: "We have 74,000 [mail-in ballots] that came back from individuals where we don’t have a clear indication that they were ever sent out to them," he underscored.

BOMBSHELL: Arizona Audit experts say that there were 74,000 mail in ballots received with no record of them being sent out. pic.twitter.com/0LMel5Yj2l

​The auditor further revealed that approximately 18,000 people voted but were removed from voter rolls "soon after the election"; there were 11,326 people who were not on the voter rolls on 7 November 2020, but appeared on the rolls on 4 December 2020; and there were 3,981 people who voted after registering after 15 October 2020.

​CEO of CyFIR Ben Cotton, one of the subcontractors taking part in the recount, said that the analysis of the election management system and network exposed "severe cybersecurity problems". The reported discrepancies have triggered concerns among the state GOP, given that President Joe Biden won Arizona by a razor-thin margin of 10,000 votes, or 0.3 percentage points.

Responding to the latest discoveries, Maricopa County Board of Supervisors Chairman Jack Sellers blasted the auditors as "incompetent". "What we heard today represents an alternate reality that has veered out of control since the November General Election", Sellers stated.

To clear up the issues, the audit team requested more items to complete their review, including ballot envelope images, router images, splunk logs, hard drives that contain information about the 2020 election, as well details on Maricopa County's policies and procedures. However, the state's Democratic Party and the Maricopa County Board of Supervisors vocally opposed providing any material to whom they called "uncertified auditors". The county officials have yet to provide the state Senate with previously subpoenaed items including routers or router images.

Former President Donald Trump has called the recent Arizona Senate hearings on the Maricopa County election audit "devastating news to the radical left Democrats", suggesting that "there was no victory" for then-presidential candidate Joe Biden in the state.

New discrepancies have also been found in Fulton County, where most of Atlanta is located. A nonpartisan election integrity nonprofit called Voters Organised for Trusted Election Results in Georgia (VoterGA) reported on Wednesday that at least 36 batches of mail-in ballots containing 4,255 votes were redundantly reported in the Fulton County audit results for the 3 November election. This includes 3,400 extra votes for then-Democratic presidential candidate Joe Biden, 865 extra votes for Donald Trump and 43 extra votes for Jo Jorgenson.

​The election integrity activists also believe that seven audit tally sheets were "falsified to contain fabricated vote totals". Thus, for example, a batch containing 59 ballot images for Biden and 42 for Trump was reported as 100 for the Democratic candidate and zero for the ex-president, according to Voters GA. In addition to that, it turned out that nearly 200 ballots were scanned two times before a recount.

FULTON COUNTY, GA: 🚨🚨🚨 More evidence from @VoterGa shows audit tally sheets were marked entirely for @JoeBiden despite having votes for Donald Trump and Jo Jorgensen in those batches. Must watch! @RealAmVoice pic.twitter.com/RPOBsCON7Q

Based on recent reports out of Fulton County:

1. Brian Kemp should resign.
2. Brad Raffensberger should follow him.

It’s time to CLEAN HOUSE here in the state of Georgia.

​However, the secretary of state has also come under criticism from some of his Republican Party peers who insist that he and Governor of Georgia Brian Kemp should resign because they had apparently known about the irregularities but concealed them from the public.

Pennsylvania, which was won by Joe Biden by a margin of 80,555 votes, has also become a new battleground for the GOP effort to review the 2020 elections results.

In June, a delegation of Pennsylvania Republican lawmakers visited the Arizona audit and signalled that they are interested in launching a similar recount effort. The initiative is being led by Pennsylvania state GOP Senator Doug Mastriano, who chairs the Senate Intergovernmental Operations Committee and is regarded as a potential future gubernatorial candidate.

The votes necessary for a forensic audit in #Pennsylvania have been secured--and #Democrats are sweating.@SenMastriano's interview with @jfradioshow:https://t.co/CbB6HbjkRb#Election2020 #TeaParty #Trump2020

​On 7 July, Mastriano announced that he had sent letters to Philadelphia, York, and Tioga counties, asking them to turn over election materials by 31 July.

"The case for a forensic investigation of the 2020 general election is evident to any unbiased observer," Mastriano wrote in an official statement. "This was the first election in Pennsylvania with 'mass' mail-in voting. In 2020, there were 2.7 million ballots cast by mail and absentee compared to about 263,000 absentee ballots cast in 2016. Many of these ballots were counted at offsite locations with little outside observation or oversight. Furthermore, mail ballots without signature verification were permitted to be counted across the Commonwealth."

​However, it was reported on 15 July that Tioga County Commissioners would not provide access to their ballots and election equipment after receiving a directive from the Pennsylvania Department of State to withstand Mastriano's effort and to not allow third parties to conduct a forensic audit of the 2020 election results. On 16 July, York County also refused to take part in the recount citing the legality of Mastriano's request, the legality of his demand, the cost to the county and their lack of staff to complete the project. They also raised concerns over possible decertification of their election equipment by the Department of State.

The state's GOP issued a statement denouncing the Department of State’s directives as "an attack on the General Assembly’s power to review, investigate, and legislate in matters within its legislative authority, which includes Pennsylvania’s election system."

Election Audits in Georgia and Arizona Are Showing Irregularities in Ballots