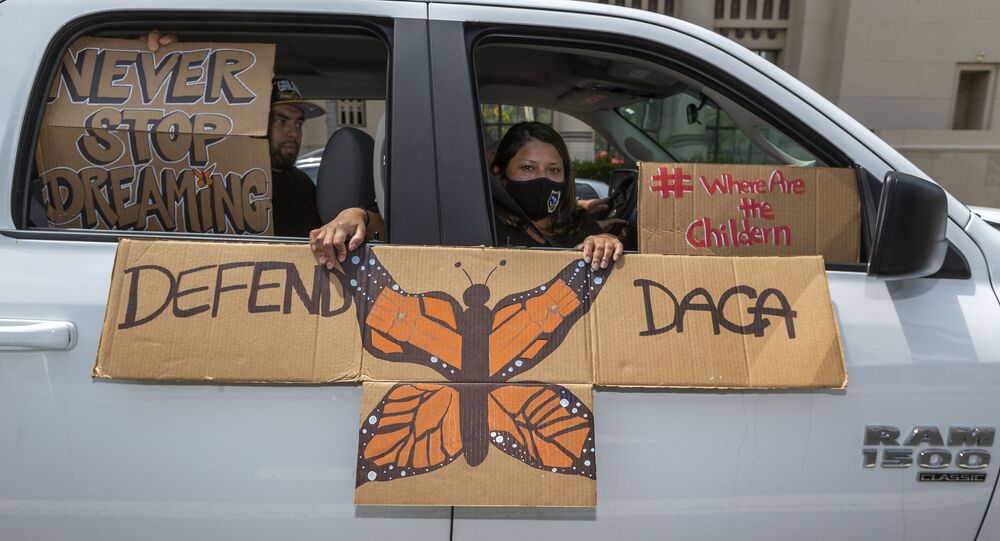 A very low immigration quota set by the Trump administration created a huge backlog in the processing of applications, including those by tens of thousands of Afghans who collaborated with the US occupation of Afghanistan and whose paperwork the Biden administration is now rushing to process as it prepares to withdraw from the country.

A US federal judge in Texas has ruled the Deferred Action for Childhood Arrivals (DACA) program "illegal" and ordered the government to stop processing applications to the program.

Judge Andrew S. Hanen of the United States District Court for the Southern District of Texas ruled on Friday that the US Department of Homeland Security (DHS) "is directed to post a public notice, within 3 calendar days of this injunction, to be displayed prominently on its website and on the websites of all other relevant agencies, that a United States District Court has found the DACA program to be illegal and that, though applicants may continue to submit applications, the government is prohibited from granting such applications."

"The court finds this permanent injunction is reasonable and properly takes into account the reliance interests of the Plaintiff States on the duly enacted immigration laws of this country, the interests of the public in having the government and its agencies and employees comply with the law, and the significant reliance interests that DACA has engendered since its inception," the ruling continues. "If the government fails to take the appropriate steps to remedy the shortfalls in DACA within a reasonable time given the complexities inherent in such a process, the court will reconsider its decision to stay portions of the relief that it has granted, if an appropriate motion is filed."

Just in: A federal judge in Texas has blocked the DACA program going forward — it won't affect current recipients for now (judge is putting that issue on hold, pending expected appeals), but it blocks DHS from approving new applications https://t.co/urJh8jnJDd pic.twitter.com/LqvSDWx2ao

According to Hanen, DHS violated the Administrative Procedure Act (APA) by creating and continuing to operate DACA because judicial precedent has established that a US government agency has no power to act until given that power by Congress, and Congress has "expressly foreclosed DHS's adoption of the DACA memorandum."​

The DACA program was begun in 2012 after the Development, Relief, and Education for Alien Minors (DREAM) Act failed to pass Congress, in order to give immigrants who were illegally brought to the country as children the chance to gain lawful status. It has been highly contentious for virtually its entire existence, producing extensive legal battles as opponents of the act attempted to block its implementation or phase it out completely, as former US President Donald Trump attempted to do, or to retain or reinstate it as a program, as US President Joe Biden did on his first day in office on January 20, 2021.

In 2018, Judge Hanen similarly ruled that DACA was probably illegal, but he declined to issue an injunction at that time due to ongoing litigation. "If the nation truly wants a DACA program," Hanen wrote at the time, "it is up to Congress to say so."

In March, the US House of Representatives passed the American Dream and Promise Act of 2021, which would pave a path to citizenship for DACA recipients. While the bill has faced a much tougher challenge in the Senate, Sen. Joe Manchin (D-WV), a moderate Democrat who is often out of step with his party's mainstream political goals, signaled earlier this week that he supported including the act in the colossal $3.5 trillion infrastructure deal being shoved through the Senate via the budget reconciliation process.