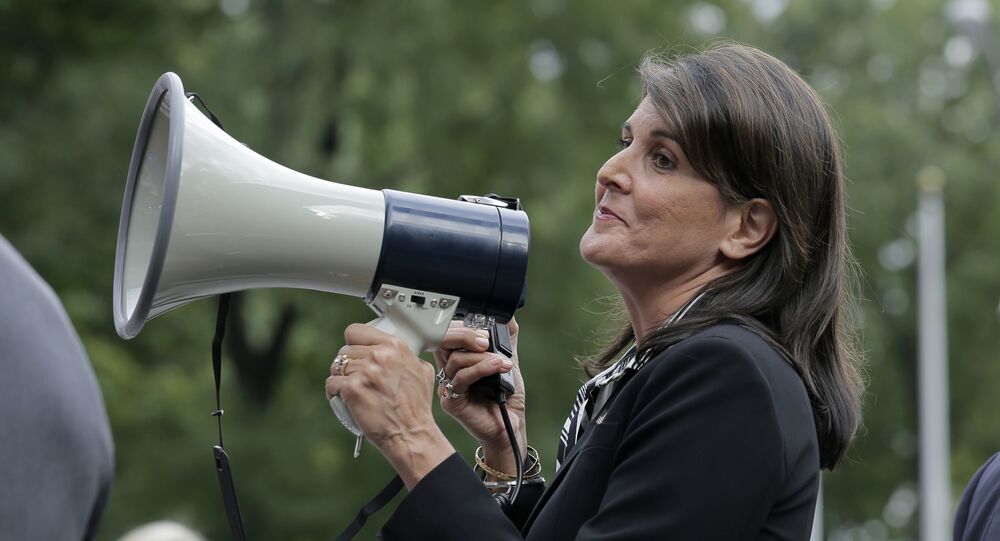 Nikki Haley Will Be 'the First Woman President' in US, Charles Kushner Reportedly Says

In April, Nikki Haley said that she would not run for the presidency in 2024 if Donald Trump decides to do so, pledging to support the former president if he chooses to run.

Charles Kushner and his wife have hosted a private lunch for former South Carolina Governor and UN Ambassador, Nikki Haley, at their beach house in New Jersey, Vanity Fair reports.

The US magazine cited unnamed sources as saying that during last Sunday's event, the father of Jared Kushner and father-in-law of Ivanka Trump predicted that Haley would be "the first woman president" in the US.

Separately, Vanity Fair cited another source as saying that Jared and Ivanka Trump "think very highly of Nikki" and that "they get along great".

Charles Kushner was pardoned by then-outgoing US President Donald Trump in December 2020. The 67-year-old Jewish businessman was convicted in 2005 for fraud, tax evasion, and witness tampering.

Sunday's lunch came as the ex-POTUS delivered a speech at the Conservative Political Action Conference (CPAC), where he briefly hinted at a possible presidential run, despite saying earlier in the day that he had already decided whether or not to launch another election campaign.

In February, the former president spoke at a CPAC convention in Orlando, where he slammed President Joe Biden, Republicans who have not supported his cause, and also hinted at his potential presidential bid in 2024.

As for Nikki Haley, she made it clear in mid-April that she would not run for the presidency in 2024 if Trump moves to do the same.

"I would not run if President Trump ran and I would talk to him about it. That's something that we will have a conversation about at some point, if that decision is something that has to be made. But yeah, I would, absolutely", she told the news agency AP.

Haley, who served in the Trump administration as the United States' ambassador to the United Nations from 2017 to 2018, said she last had a conversation with Trump after the election but before the 6 January Capitol events.

The ex-South Carolina governor previously criticised the former president for being "badly wrong with his words" during the 6 January rally that preceded the Capitol violence and said that Trump "let down" the Republican Party.

He was accused of "inciting an insurrection" and impeached by the US House of Representatives after the 6 January "Stop the Steal" rally in Washington in support of him spiralled out of control and morphed into a riot that left 5 people dead, with dozens of people breaking into the Capitol building. The Senate later voted 57–43 to convict Trump of inciting an insurrection, but fell 10 votes short of the two-thirds majority required by the Constitution, and so Trump was therefore acquitted