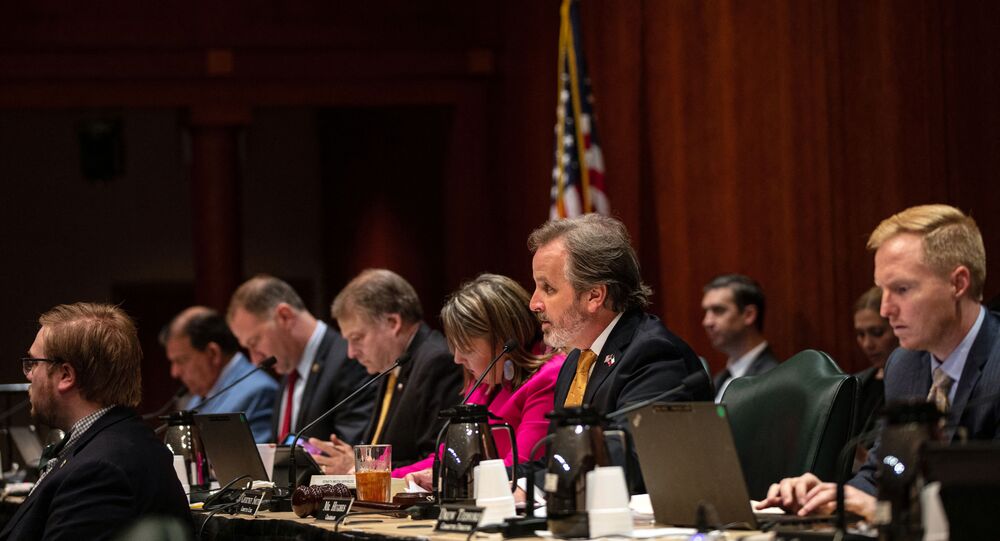 What's the Deal With Texas Election Bills and Are They 'Jim Crow 2.0'?

Seventeen American states have moved to implement new voting laws, with Texas now joining in the attempt. The reforms have prompted diverse reactions - while Republicans hail the new rules, Democrats, including President Joe Biden, blast the bills as "Jim Crow 2.0", claiming their goal is to make it harder for poor and black Americans to vote.

In a move by Republican lawmakers in Texas to push election reforms in the Lone Star state, GOP members from both the House and the Senate appear to have found common ground in bills proposed for voting - something that cannot be said about their Democratic counterparts.

In order to prevent the bills from being approved by the Republican-controlled bodies, Democratic lawmakers have fled to Washington, DC, ditching their legislative duties and trying to bar the chambers from maintaining the quorum necessary to vote on the bills. Texas GOP Governor Greg Abbott vowed to arrest the Democratic state representatives who fled the Lone Star state in protest against the bills.

It did not work with the Texas Senate, which was able to pass Senate Bill 1 due to enough lawmakers being present to hold a vote. The Texas House, in turn, established that it did not reach a quorum, and with SB1 to remain in limbo until a quorum is reached, the chamber also made no progress on House Bill 3.

Yet, even the move by the Texas Senators to vote on SB1 prompted backlash from the Democrats, particularly US President Joe Biden, who blasted the bills as a "21st Century Jim Crow assault", comparing it to US laws from the late 19th century and early 20th century that enabled racial segregation and discrimination in the country.

Senate Bill 1 and House Bill 3 have many things in common, as both focus on enhancing the role of poll watchers in elections and embracing additional ID requirements for both absentee and in-person voting.

Specifically, SB1 suggests banning 24-hour-long voting, drive-thru voting, and casting a ballot from inside a vehicle unless based on the physical condition of a voter. Vote counting activities would be subjected to video surveillance under the bill, with a live stream available to the public in counties with 100,000 residents or more. Partisan poll watchers are suggested to be allowed to watch election activities inside poll stations, vote counting centres, and during curbside voting that takes place in a vehicle. Denying access to a poll watcher would be considered a crime.

Both bills also prohibit election officials from distributing unsolicited applications to request a mail-in ballot, with HB3 making it a felony.

For mail-in voting, both bills offer new ID requirements to verify such ballots. Voters would be required to submit their driver's license number or the last four digits of their Social Security number on applications for such ballots. In order for those votes to be counted, voters must also provide matching information on the envelope used to return their ballot.

Additionally, on a monthly basis, the State Secretary and the Department of Public Safety would be required to provide information from the voter registration database to verify the citizenship status of voters.

© AFP 2021 / SCOTT OLSON
A protester holds up a sign that reads "We Never Left Jim Crow" during a protest sparked by the death of George Floyd while in police custody on May 29, 2020 in Minneapolis, Minnesota. Earlier today, former Minneapolis police officer Derek Chauvin was taken into custody for Floyd's death. Chauvin has been accused of kneeling on Floyd's neck as he pleaded with him about not being able to breathe. Floyd was pronounced dead a short while later. Chauvin and 3 other officers, who were involved in the arrest, were fired from the police department after a video of the arrest was circulated.

Jim Crow laws - those that Biden compared to the Texas bills - were state and local laws in the US that enforced racial segregation and discrimination, first introduced in the late 19th century. These laws were in effect until 1965, mandating segregation in all public facilities, transportation, and education in the states of the former Confederate States of America and some others.

Many Democrats compare the Texas bills to the old segregation laws, claiming that Republicans aim to suppress the voting rights of minorities and the poor.

"They want to make it so hard ... that they hope people don't vote at all. That's what this is about", Biden said Tuesday in his speech in Philadelphia. "The 21st Century Jim Crow assault is real, it's unrelenting, and we are going to challenge it vigorously".

Republicans, particularly GOP Texas Senator Bryan Hughes, the author of SB1, suggest that the bills are based, in his opinion, on common sense, noting that the point of the legislation is to make it "both easy to vote and harder to cheat".

In particular, when comparing the Texas bills to the Jim Crow laws, Democrats slammed the proposal to restrict the start time for Sunday early voting hours - offered in the earlier version of the bill, Senate Bill 7, which was killed by the Dems in May - arguing that it targeted the "souls to the polls" efforts focused on black people going to church at this time. In the new bills, the proposal was dropped, with a new time suggested for voting hours, moving it from 5 hours to 6.

GOP Texas Governor Greg Abbott, when commenting on the voting hours suggested in the bills, stated that they would be "providing more hours per day for voting to make sure that anybody with any type of background, any type of working situation is going to have the opportunity to go vote".

He also argued that drive-thru voting "violates the way that voting integrity has always been achieved and that is the sanctity of the ballot box".

"If you do drive-thru voting, are you going to have people in the car with you? It could be somebody from your employer or somebody else that may have some coercive effect on the way that you would cast your ballot, which is contrary to you going into the ballot box, alone and no one there watching over your shoulder", he suggested.

The two bills are part of an attempt by Republican lawmakers in Texas to join with their GOP counterparts in 17 American states that have implemented new voting laws envisaging more restrictions over the election process - a move particularly fuelled by the ongoing claims of former US President Donald Trump that the 2020 election was "stolen" from him due to massive "voter fraud".

Specifically, Trump and his supporters claimed that there were voter irregularities in swing states, "dead people" voting, "thousands of ballots" were "dumped" in favour of Biden, and unregistered residents voting in states where they are not supposed to vote. The former president also slammed mail-in voting as potentially leading to massive fraud.

Since losing the election, Trump and the GOP have pushed for election reforms in the US, calling for additional ID requirements and other provisions to secure what they claim is "election integrity" so as to avoid having "an election rigged and stolen from us".