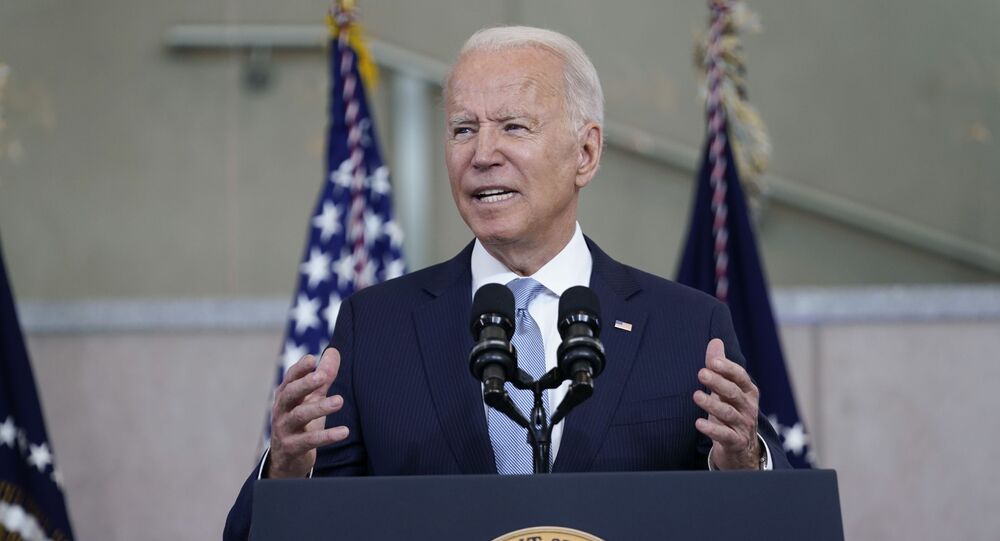 US President Joe Biden said Tuesday that defending voting rights in the United States was a “national imperative,” calling the slew of Republican state legislation this year restricting access to voting “the most significant test of our democracy since the Civil War.”

The choice of venue was itself significant: the Declaration of Independence and US Constitution were both signed in the eastern port city, just blocks from the hall where Biden made his remarks.

“Bullies and merchants of fear, peddlers of lies, are threatening the very foundation of our country … They want to make it so hard ... that they hope people don't vote at all. That's what this is about,” he said, noting that 17 states this year have enacted 28 new laws making it harder for Americans to vote.

The Democratic leader drew extensive comparisons between the slew of laws and court rulings restricting access to voting and control over voting processes to the nation’s long history of civil rights fights focused on voting rights, including the movements for Black suffrage and women’s suffrage.

“The 21st Century Jim Crow assault is real, it’s unrelenting, and we are going to challenge it vigorously,” Biden said.

© AP Photo / Ben Gray
Supporters of Georgia State Rep. Park Cannon, D-Atlanta, leave the State Capitol in Atlanta on Monday morning, March 29, 2021 after escorting her into the building. Cannon was arrested last week for knocking on the governor's office door as he signed voting legislation.

He urged passage of the For the People Act, a sweeping bill that would reverse many of the state-level voting rights changes as well as combat gerrymandering of districts and change campaign finance laws, but which was successfully filibustered by Republicans in the US Senate last month. However, he also said he would be doubling the size of the voting rights section of the US Department of Justice’s Civil Rights Division and the number of enforcement staff.

However, Biden has so far resisted calls to end the filibuster, which he has the power to do, despite it blocking much of the legislation central to his agenda, including the Protect the Right to Organize (PRO) Act, the American Families Plan, the American Jobs Plan, and the Equality Act.

‘Have You No Shame’?

Biden also assailed the enduring view among Republicans that the November 2020 election was stolen and that then-President Donald Trump was the true victor, and the corresponding defense of the insurrection at the US Capitol on January 6, 2021, when Trump supporters attempted to block certification of the Electoral College’s voting results.

“The Confederates back then never breached the Capitol as insurrectionists did on January 6,” Biden said, referring to the pro-slavery faction that ruled 11 southern states and attempted to secede from the United States in 1861 in order to preserve the enslavement of Black Americans. The four-year-long civil war that followed killed as many as 850,000 people and remains the bloodiest conflict for Americans in US history, although it resulted in the freeing of four million enslaved Black Americans and the abolition of slavery outside of prisons.

According to a Quinnipiac poll conducted in late May, two-thirds of Republicans believe Biden’s November 2020 election victory wasn’t legitimate, although 64% of Americans overall believe that it was. The poll also found that two-thirds of Republicans would like to see Trump, who has only served one out of a possible two terms in office, run for president again in 2024. Those numbers are up substantially from the period immediately after the attempted putsch in which five people were killed, when it was just 42% of Republicans.

Biden attempted to cross the aisle and win over some of that support to his voting rights push by appealing to Americans’ “sacred right to vote,” while noting the concern world leaders voiced to him about the future of American democracy after the Capitol was stormed.

“We’ll be asking my Republican friends in Congress and states and cities and counties to stand up for God’s sake,” Biden said. “And help prevent this concerted effort to undermine our election and the sacred right to vote. Have you no shame?”

“Have you no shame?”

— President Biden to Republican lawmakers on protecting the right to vote. pic.twitter.com/KMCAifavwE

​Many, if not all, of the voting restrictions introduced by Republicans in the weeks and months after the November 2020 election were motivated by claims made by Trump that widespread fraud had allowed Democrats to manipulate the results of the vote, including by changing the way people voted and by producing fake mail-in ballots.

“Audits, recounts were conducted in Arizona, Wisconsin, in Georgia it was recounted three times. It’s clear, for those who question the results and challenge the integrity of the election: no other election has ever been held under such scrutiny and such high standards. The Big Lie is just that: a big lie,” Biden said to applause.

For those who challenge the results and question the integrity of the 2020 election — no other election has ever been held to such scrutiny and high standard.

​Trump has continued to push his claims at political events, including the Conservative Political Action Conference (CPAC) summer gathering in Dallas, Texas, over the weekend, where he raged that “we were doing so well until the rigged election happened to come along. We were doing really well."

"Unfortunately, this was an election where the person that counts the votes was far more important than the candidate, no matter how many votes that candidate got - and we got record numbers of votes,” Trump said.