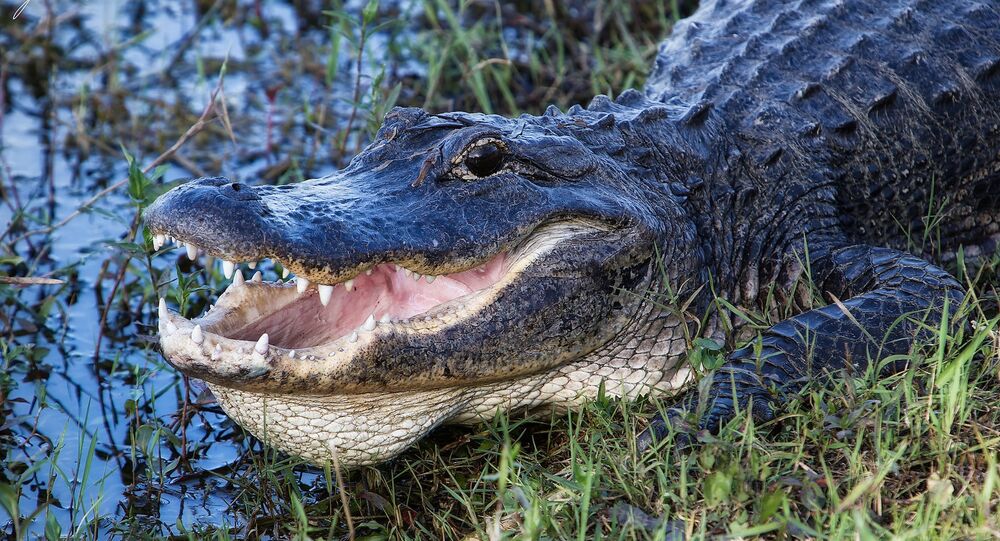 The case of the decapitated head is being explored in the Oxygen docuseries "Florida Man Murders," which focuses on bizarre crimes committed in the state.

Back in 2007 the gruesome discovery of a severed head was made in a canal along Alligator Alley in Florida's Everglades, and it took investigators more than a decade to work out what happened to the victim.

The case is being explored in the Oxygen docuseries "Florida Man Murders," which features interviews with detectives who looked into the murder. The series also analyses other horrific crimes committed in Florida.

Major Scott Champagne of the Broward County Sheriff’s Office told Fox News that the “harsh environment” of the Everglades holds many secrets: "It’s not unusual for us to work homicide investigations that ultimately end up in the Everglades."

© AP Photo / Victor R. Caivano
The sky reflects on the north-east boundary of the Evergaldes National Park, near Miami, on Monday, July 27, 1998. A $7.5 billion, 20-year project, referred to as the Central and Southern Florida Project Restudy, has been developed by a multi-agency committee of people and organizations interested in restoring the Everglades.

Referring to the case of the mysterious decapitation, he said that at first glance it didn't seem like the work of a serial killer but the investigators had precious few clues to work with.

The severed head had no bite marks, according to a report in the Sun-Sentinel, which added that a plastic shopping bag from Waldbaum’s, a supermarket chain located in New York, used to carry the head was found nearby.

In April 2007, Hatzakorzian’s 41-year-old’s mother told the authorities she had seen her daughter leave New York with two men. It was also revealed that the woman had picked up a money order on April 16 from a Waldbaum’s on Long Island.

That is what helped the investigators track down Paul Bryan Trucchio, 33, and Robert Mackey, 39, who lived together in Port Orange, Florida.

A roommate of the duo claimed that the men boasted about murdering a woman and dumping her body parts, according to a report by the New York Daily News.

According to a police report cited by the outlet, Trucchio and Mackey had removed New York license plates from a blue pickup truck registered to Hatzakorzian.

The roommate also purportedly alleged having seen the two men cleaning the truck with bleach. Further investigations discovered that Trucchio and Mackey had been stopped for a traffic citation while driving Hatazkorzian’s pickup on 1 May.

More details of the crime surfaced as the men had ostensibly spoken about a murder they carried out to an inmate at the Volusia County jail, where they were held on unrelated charges at the time. The details seemed to tie in with the evidence.

The documentary focusing on the heinous crime revealed that witnesses testified to the bizarre fact that Trucchio and Mackey had allegedly prayed to an "alligator god" to help them cover up their deed.

It was suggested that the suspects hoped evidence would end up being consumed by nearby alligators. Champagne described Trucchio and Mackey as "stone-cold killers" who had bound, beaten unconscious, and dismembered their victim.

"This was a violent, heinous act committed against her. In circumstances like this, you want to say that the victim didn’t suffer. But I’m not sure this is the case with this particular investigation based on what we know. The suspects, in this case, had more than enough opportunity [to stop] and they failed to do so. Instead, they took it a step further and dismembered her."

In 2007, Trucchio and Mackey were charged with grand theft and first-degree murder. Both men maintain their innocence.