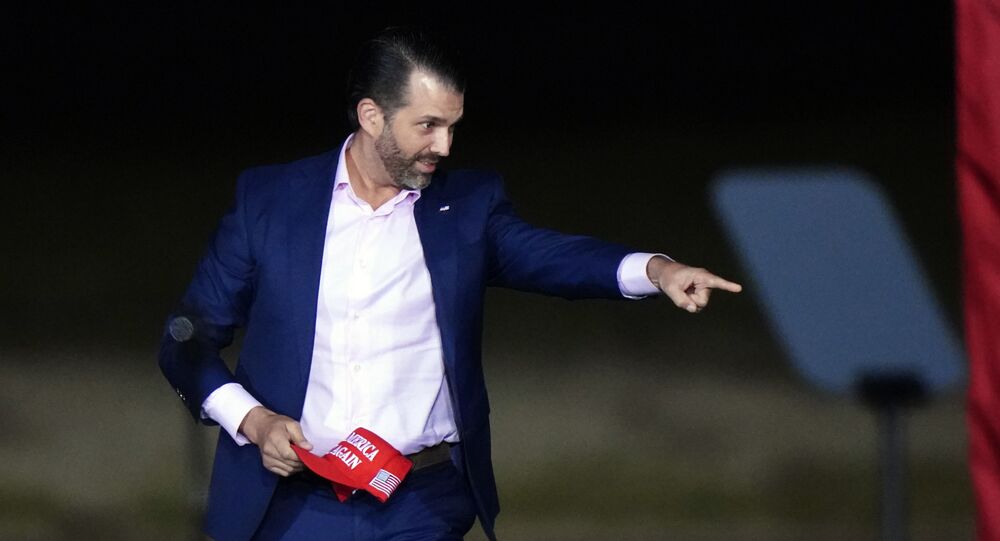 Americans went to the polls eight months ago for highly contested presidential and congressional elections, but thanks to the country’s unconventionally long election cycle, lawmakers are already gearing up for the 2022 midterms, which will include the election of all 435 seats of the House of Representatives, and 34 of the Senate’s 100 seats.

“I’m going to be very involved. The reality is I’m the father of five young kids, I’m a patriotic American and I look at what’s going on, and someone has to push back,” the junior Trump said, speaking to Fox News on Friday night.

2024 Watch: @DonaldJTrumpJr - at@CPAC gathering in Dallas - asked by @Fox News if he's mulling a bid for the next GOP presidential nomination if his father doesn't run again, says “I haven’t personally thought about it" but touts his position in some 2024 polls he’s seen pic.twitter.com/4HIFRHCUW9

Trump Jr promised that people would see him out “everywhere” campaigning ahead of the 8 November, 2022 vote.

The younger Trump, one of the few members of the former president’s inner circle who did not see his social media platforms scrubbed after the unrest at the Capitol in January, has 6.8 million followers on Twitter, and 4.8 million on Facebook. He has remained heavily involved in public discussions of politics in the wake of his father’s controversial loss in 2020, appearing at the Conservative Political Action Committee in Dallas on Friday, traveling around the country to promote his book ‘Liberal Privilege’, and engaging in fundraising for his father’s class action lawsuit against Big Tech.

© AP Photo / John Raoux
‘Your Dad is a Billionaire’: Trump Jr’s Fundraising for Father’s Anti-Big Tech Lawsuit Falls Flat
Amid continued rampant speculation on whether Trump senior, 75, will run again in 2024, Fox asked Trump Jr. whether he was considering running for president if his father did not. “I haven’t personally thought about it” was his response.

“There’s some people talking about it in terms of polls, I’ve seen a bunch that has me pretty high up on the list if not at the top of it. Who knows? The reality with that job is you also have to want to do the day job. It’s not just about the campaigning. I love being in that fight, I love fighting for the things that are out there that I believe in as a conservative. I will do that irrespective. To actually want to get in that mix is a different story,” the 43-year-old added.

Unlike his father, who built up a multi-million-dollar real estate empire into a multi-billion dollar global conglomerate and franchise and became one of America’s most outspoken businessmen and celebrities, Trump Jr’s reputation, wealth and status is tied almost exclusively to his father’s name. The younger Trump serves as a trustee and executive vice president of the Trump Organisation along with his younger brother, Eric Trump, and was a boardroom judge on his father’s hit NBC reality show The Apprentice. He was also active in the 2016 and 2020 presidential elections, fervently supporting his dad against Democrats Hillary Clinton and Joe Biden.