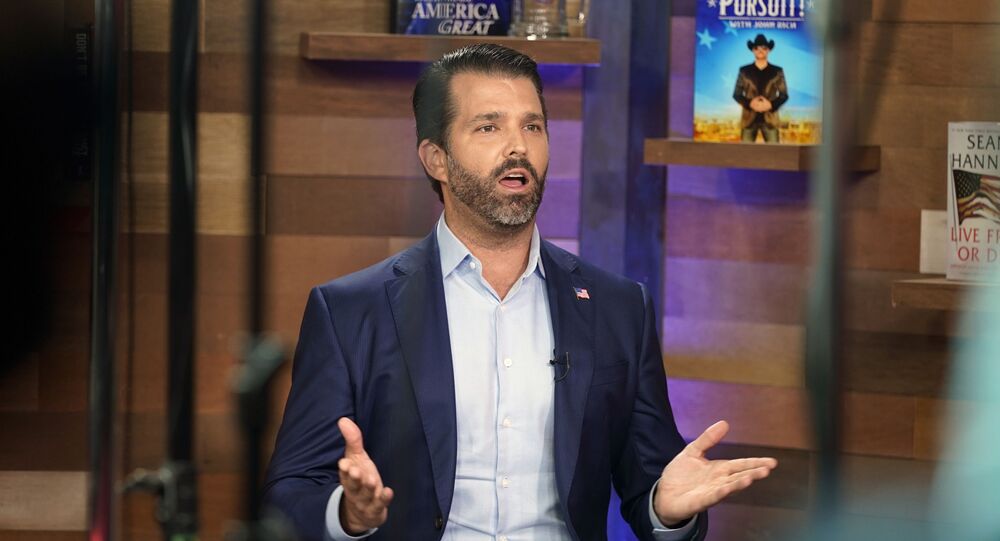 Ahead of his appearance at the Conservative Political Action Conference (CPAC) in Dallas, Texas on Friday, Donald Trump Jr. said he would be " very involved" in the 2022 midterm elections, helping Republicans win back the majority in the House and Senate.

ICYMI: @DonaldJTrumpJr's full and electrifying speech from CPAC in Dallas! Must watch stuff!https://t.co/3nUrV7Y8Fl

While touting how right his father, former President Donald Trump, was "right" about "everything", he mercilessly trolled President Joe Biden and his son, Hunter, while rattling off a list of the problems unleashed since the Democratic POTUS took office.

‘World is Going to Hell’

Trump Jr. lamented that "the world is going to hell" under the Biden administration, which has been sending out a “welcoming” message to illegal migration.

“We’re going to give you free health care, free education. You can take American jobs,” he mocked Biden’s approach to the challenging crisis that has engulfed the US southern border after the president sought to overturn his predecessor Trump’s immigration policies.

He also took a swipe at White House Press Secretary Jen Psaki and CNN for pushing the "narrative" that it is Republicans, not Democrats, who favor of "defunding the police."

"Jen Psaki told me so, so it must be true! Is that true or did you see that on CNN?" he queried.

Donald Trump’s son roasted the media for claiming that the "proof" that President Biden "hasn't lost it" or is not "riddled with dementia" was the fact that to Russian President Vladimir Putin called him "smart."

“I don't know. I'm gonna go out on a limb here and say if it was Donald Trump that Vladimir Putin said that about, it'd be a slightly different response. Did you ever think that maybe Vlad is thrilled to be negotiating against a dolt?" said Trump Jr., in a reference to Biden’s recent summit with the Russian President.

The American political activist, businessman and author went on to joke about Joe Biden’s numerous blunders and gaffes.

“Has Joe Biden done anything that didn’t involve an ice cream parlor? It’s like my toddler. If you get the line right, you get a scoop of ice cream.”

Trump Jr., who serves as a trustee and executive vice president of The Trump Organization, running it alongside his younger brother Eric, turned up the heat on the current president’s son Hunter Biden, an admitted cocaine addict.

Rapping the younger Biden for his “racist” text messages that have surfaced from his purported "laptop from Hell," as well as the controversial White House deal to ensure that the budding artist’s paintings are sold anonymously, he said:

Trump Jr. then pivoted to Michael Avenatti, the lawyer known for his representation of adult film star Stormy Daniels in her lawsuits against Donald Trump.

© AP Photo / Mary Altaffer
In this April 16, 2018, file photo, adult film actress Stormy Daniels, left, stands with her then lawyer, Michael Avenatti, during a press conference outside federal court in New York. A trial for Avenatti to face charges that he cheated ex-client Daniels out of proceeds from her book was delayed Friday, Jan. 8, 2021, until next year

Daniels purported she had been intimate with Trump back in 2006, when his wife Melania had just given birth to their son Barron. The ex-stripper claimed Trump’s personal lawyer Michael Cohen tried to silence her in 2016, paying her $130,000 in hush money as the real estate mogul was running for president.

While Cohen later in court admitted he made the payment, Trump denied the affair altogether.

Donald Trump Jr. reveled in the recent conviction of Avenatti after he was sentenced to 30 months in prison over scheming to extort millions from sportswear maker Nike by threatening to expose illicit payments to amateur basketball players.

“Despite what we see going on on a daily basis, there is a silver lining. Michael Avenatti is going to prison,” Trump Jr. said.

Moving on to address the coronavirus lab-leak theory, widely dismissed by Democrats and members of the media last year while Donald Trump vehemently embraced it, he said:

"At what point in time in these morons' minds, I don't know, the Wuhan lab-leak theory not the most plausible argument in the year 2020?"

Trump Jr. ridiculed the lab-leak deniers. As the audience laughed, he responded:

"Don't laugh- you're not canceled. Congratulations… By laughing, you would have been thrown off every social media platform, you would have been thrown out of a job in science because, you know, science no longer follows the rules of physics, right? They don't follow math, they follow the narrative dictated by CNN because that is able to manipulate the rules of physics,” Trump Jr. quipped.

The lab leak theory has since became increasingly mainstream, with the Biden administration bowing to popular pressure in May and ordering US intelligence to produce a report in 90 days on the virus’ origins.

“Fauci is better at pitching baseballs than he is at science. I want to see them fact check that,” said Trump Jr. as he then weighed in on why he believes his family is strongly supported by the conservative base. "We actually fight. We'll actually push back, right? That's what Donald Trump did for the Republican Party… We need you guys in that fight with us… They can't cancel all of us."

He concluded by looking to the future and urging the crowd of supporters to “stay in the fight.”

"We need you in there with us… We will continue to be in this fight as long as you guys do."