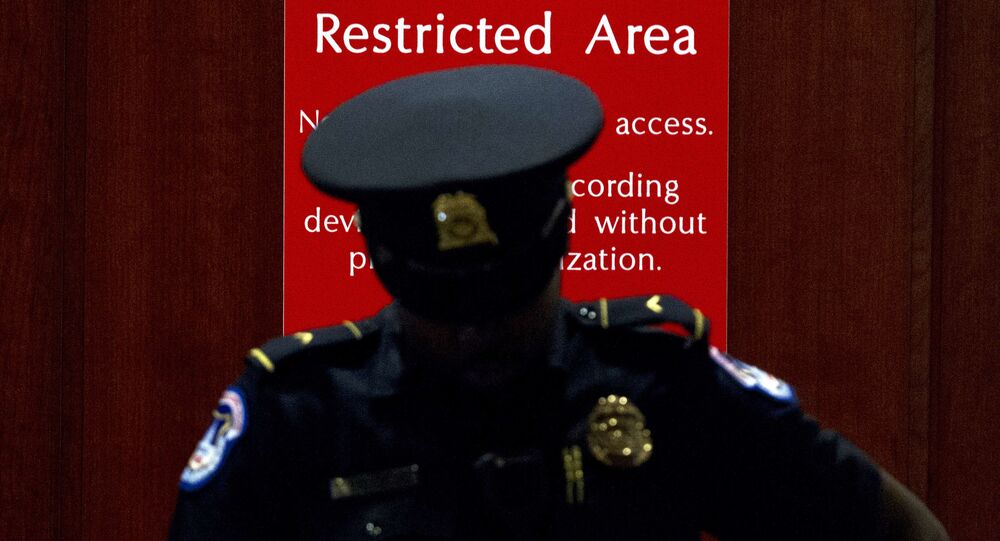 Unaccountable & Armed With Sweeping Powers: What's Behind US Capitol Police Expansion Beyond DC?

Conservative and independent observers are suspicious about the expansion of powers, resources, and presence of the United States Capitol Police (USCP) across the nation. Florida – the home state of former President Trump – and California have been picked as the first two locations for the USCP's external branches.

On 6 July, the United States Capitol Police (USCP) announced that it would expand its presence beyond Washington, DC by creating field offices in California and Florida "with additional regions in the near future" in order "to ensure security for members of Congress outside of the National Capitol Region."

In addition to that, the USCP Civil Disturbance Unit has stepped up joint exercises with the National Guard, increased riot training, as well as use of force, tactical, equipment, leadership, and incident command training.

The USCP has also adopted a new Critical Incident Response Plan which envisages the rapid mobilisation of "local, state, and federal manpower, including the Department of Defence" to respond to "planned and/or no-notice emergencies."

Furthermore, in order to become "an intelligence-based protective agency" the USCP is going to obtain access to "state-of-the-art campus surveillance technology, which will enhance the ability to detect and monitor threat activity" through a loan from the Pentagon. Meanwhile, it "has vastly increased the information shared with sworn officers about obtained intelligence and event planning" internally. For its part, the Capitol Police leadership "has increased intelligence sharing and collaboration between all of [its] local, state and federal law enforcement partners as well as increased [its] partnership within the intelligence community and Congressional stakeholders."

"It has been six months since rioters attacked the United States Capitol and our brave police officers and law enforcement partners who fought valiantly to protect elected leaders and the democratic process," acting USCP Chief Yogananda Pittman said in a statement. "Since that day, our team has been working with federal law enforcement agents to track down the suspects and bring them to justice. So far more than 500 defendants face charges."

© AFP 2021 / POOL
The hat of acting U.S. Capitol Police chief Yogananda Pittman sits on the table before an Appropriations Subcommittee hearing on Capitol Hill on April 21, 2021 in Washington, DC. The committee is hearing testimony on the FY 2022 budget request for the Architect of the Capitol, Senate Sergeant of Arms and the U.S. Capitol Police.

'Capitol Police is Unaccountable to Public'

The USCP's new strategy has raised many eyebrows among conservative and independent observers.

"The United States Capitol Police (USCP) is opening up regional offices, prompting concerns that the police body is acting outside of its jurisdiction and charter," wrote Kyle Becker, former associate producer at Fox News and CEO of Becker News.

Becker has drawn attention to the fact that the Capitol Police’s action plan includes recommendations of the newly established and largely partisan "House Select Committee," launched by Speaker Nancy Pelosi to review the causes of the 6 January incident. Pelosi is "one of the principals who exerts authority over the Capitol Police," the observer pointed out.

​Remarkably, the 13-member select committee includes just one Republican: Rep. Liz Cheney, who is known as an outspoken critic of former President Donald Trump and ardent supporter of the Dems' 9/11-style Commission on the Capitol riot. The latter was nixed by Republican senators in late May 2021.

Hey Congressional Republicans, any thoughts on the Capitol Police becoming our newest federal domestic surveillance agency under your watch, empowered by the hysterical (and false) Jan 6 narrative that basically all of you repeated for months?

​Besides the USCP's apparent partisanship, the agency "is exempt from normal mechanisms of public accountability," Becker pointed out. Therefore, for example, being a part of the legislative branch the Capitol Police is exempt from any Freedom of Information Act (FOIA) requests, according to the conservative observer. He also lamented the fact that the agency "escaped all public responsibility" for killing unarmed Trump supporter and military veteran Ashli Babbitt on 6 January 2021.

The Capitol Police opening offices in California and Florida is a disaster waiting to happen.

The Witch-Hunt has just gotten started.

​"This same unaccountable Capitol Police force is now opening up branch offices nationwide," Becker highlights. "The legal basis for how such a police force could operate within the jurisdiction of state laws is unclear."

Independent journalist and lawyer Glenn Greenwald has also sounded alarm over the Capitol Police's expansion and increased funding. He remarks that earlier, in May 2021, the Democratic-controlled House of Representatives approved close to $2 billion in additional spending for the agency.

"Given the massive budget and authorities the FBI and other federal law enforcement agencies already wield, why is it necessary to have yet another new police and domestic intelligence agency metastasising throughout the country?" Greenwald asked.

The main difference, according to the journalist, is that the Capitol Police has de facto turned into Senate Majority Leader Chuck Schumer and House Speaker Pelosi's "own intelligence agency and police force."

"The unleashing of a newly empowered law enforcement agency, commanded by Congress, has been enabled by one tactic: the ongoing weaponisation and exaggeration of the events of January 6 and the supposed grave domestic threat it reflects," Greenwald highlighted.

The unleashing of a newly empowered law enforcement and "intelligence" agency now spreading to other states, commanded by Congress, has been enabled by one tactic: the weaponization and exaggeration of the events of January 6 and the supposed grave domestic threat it reflects. pic.twitter.com/pKJs2uBiUY

​The DC riot narrative has been dramatically inflated by Democratic policymakers and US mainstream journalists, who "continue to cast what happened on January 6 in the most terrifying and threatening terms," according to the journalist. He believes that the growing fuss over the Capitol incident enables the US government to ramp up police powers in the name of curbing "domestic terrorism." The latest fruit of this effort is "a Capitol Police force on steroids, expanding into multiple states and armed with all new intelligence powers," he warns.

Florida No.1 in Number of 6 January Arrests

Florida and California were picked for locations of the USCP's first external branches as the two states are reportedly posing the greatest challenge to lawmakers' security. According to Orlando Sentinel's editorial board, more people from Florida were arrested than any other state in connection with the 6 January incident in Washington, while California is ranked second. About 60 Floridians have been arrested so far.

"We shouldn’t be too surprised at the distinction," the centre-left media outlet says. "This is a state led by a governor — Ron DeSantis — who, eight months after the election, still can’t bring himself to admit Joe Biden’s election wasn’t rigged, despite zero evidence that it was."

The Capitol Police field offices being opened here in Florida are part of an effort to create a national police force with which to terrorize us, a violation of states' rights.

I call upon the state of Florida to give Capitol Police an ultimatum. Get out before WE arrest YOU.

​In addition to that, Florida hosts the official residence of former President Donald Trump who continues to argue that the election was "stolen" from him and calls for audits of ballots and election equipment in key battleground states. The 6 January incident was largely triggered by US voters' concerns over the election integrity given last-minute voter rule changes and apparent irregularities in the number of states.

Tomorrow, Saturday, is the big day. We're peacefully calling on our elected officials to fight for the release of these American patriots. 1pm EST in Tallahassee. The media is noticing. This movement is growing.https://t.co/mXPgxXvZ0o

​On 10 July, a number of Florida Republican candidates are expected to hold a rally in support of detained January Sixers, called the “Free Our Patriots Rally in Tally.”

"Folks, The patriots who have been hunted down by the corrupt, communist FBI are suffering," tweeted GOP candidate Luis Miguel, the rally organiser, on 2 July. "Many of them are veterans who fought for this nation. Let's do our part to ensure they're liberated. We can't allow this in America. Be there at the Florida Capitol 10 July."

According to Orlando Weekly, charges against Florida rioters related to the Capitol breach range from conspiracy; assault, including on a federal officer; civil disorder; violent entry; obstruction of an official proceeding; and entering and remaining in a restricted building. According to an America Greatness political commentator, Julie Kelly, many 6 January detainees have complained about human rights violation, intimidation and harassment. Previously, she reported that none of the January Sixers had been accused of using firearms in the Capitol thus throwing shade on the premise that what happened in DC on 6 January could be called an "armed insurrection."