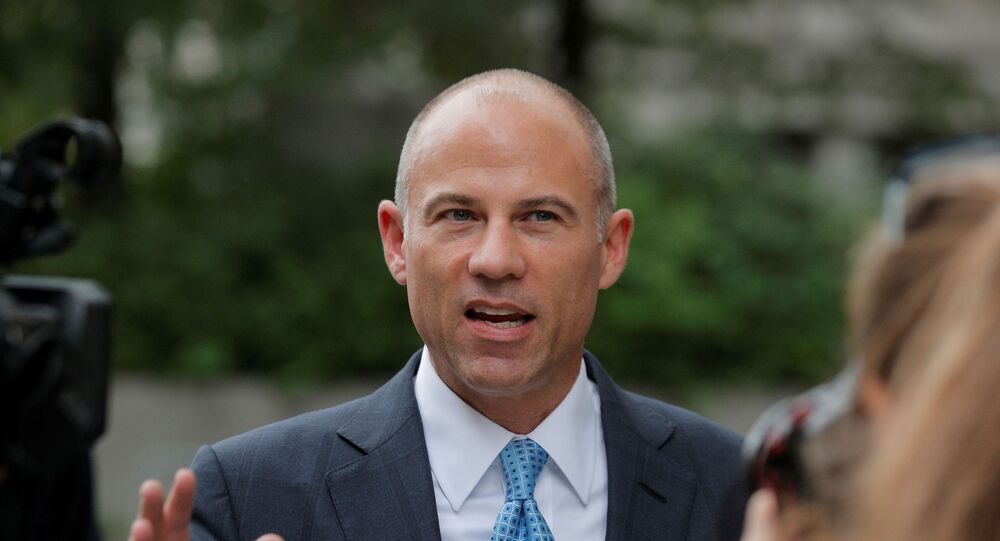 A Manhattan federal court jury unanimously ruled in March 2020 that Michael Avenatti - the attorney famous for representing adult movie actress Stormy Daniels in lawsuits against then-US President Donald Trump - was found guilty in February 2020 of defrauding a client in order to extort athletic apparel company Nike for some $25 million.

On Thursday, US District Judge Paul Gardephe dug into Avenatti for his financial greed and criminal conduct before sentencing the disgraced 50-year-old attorney to 30 months behind bars.

"Mr. Avenatti’s conduct was outrageous," Gardephe contended during the lawyer's sentencing trial in the New York City borough of Manhattan.

Avenatti's 30-month sentence was matched with another 30 months of probation.

"He hijacked his client’s claims, and he used him to further his own agenda, which was to extort Nike millions of dollars for himself," Gardephe said, as reported by CNBC.

Michael Avenatti walking out of the SDNY courthouse after being sentenced to 30 months in prison, right as the storm hits pic.twitter.com/QCi1A4oOXX

US prosecutors detailed that Avenatti's attempted shake-down of the multinational athletic apparel company lasted less than a week, and began with him promising to withhold potentially damaging claims if Nike issued upwards of tens of millions of dollars in so-called legal fees, and a $1.5 million payout for client Gary Franklin Sr., the director of a Los Angeles-based youth basketball program.

Per Avenatti's scheme, the 'legal fees' would be payment issued for an "internal investigation" of Nike led by him and high-profile criminal defense attorney Mark Geragos.

During the time, Avenatti weaponized his newfound notoriety and threatened to divulge so-called allegations of corruption during a news conference strategically scheduled one day prior to Nike's quarterly earnings call. He also claimed that Franklin was in possession of his own potentially damaging information.

After Nike refused to cough up the money, Avenatti took to Twitter to claim that corruption within the multinational company reached the "highest levels." Nike then saw a dip in stock market price.

"Nike executives were shocked,” the athletic apparel company's lawyers wrote in a victim impact statement. "Nike had made a decision to not pay Mr. Avenatti, and now they were watching as he carried out what he had criminally threatened to do."

Avenatti did not make Franklin aware of his aggressive correspondence with Nike, nor his plans to pocket money received from the scheme, according to court records. Franklin detailed in his separate victim impact statement that Avenatti's covert criminal activity "devastated me financially, professionally, and emotionally."

"Michael Avenatti used illegal and extortionate threats and betrayed one of his clients for the purpose of seeking to obtain millions of dollars for himself," said US Attorney Audrey Strauss in a quoted statement. "Not only did Avenatti attempt to weaponize his law license and celebrity to seek to extort payments for himself, he also defrauded his own client."

However, that does not appear to be the case, as the 50-year-old attorney was sentenced to not even half of the eight-year prison term recommended by Probation Office officials.

According to Gardephe, Avenatti's 30-month sentence was influenced based on the fact that Avenatti, who was reportedly crying during sentencing, "expressed what I believe to be severe remorse today." The judge also highlighted that federal prosecutors failed to charge Geragos, despite him being named as an alleged co-conspirator in the botched extortion plot.

© AP Photo / Richard Vogel
This Friday, Sept. 2, 2016 file photo shows attorney Mark Geragos talking to the media during a news conference in downtown Los Angeles. CNN has cut ties with Mark Geragos just hours after the celebrity attorney was named as a co-conspirator in a case accusing lawyer Michael Avenatti of trying to extort Nike.

It is worth noting that as Avenatti's celebrity was growing, his expenditures and debt ballooned along with it. Prosecutors have alleged that Avenatti was blowing around $200,000 a month, despite owing hundreds of thousands of dollars in payment to the US Internal Revenue Service.

The court's lenient 30-month sentencing of Avenatti wraps just one of several fraud allegations leveled against the disgraced lawyer.

Avenatti, a resident of Venice Beach, California, is slated to appear next week in a California court to be tried on allegations that he defrauded clients - including one individual who has both paraplegia and a mental illness.

Additionally, Avenatti will be tried in a Manhattan federal court next year on allegations that he defrauded client Stephanie Clifford out of some $300,000 in book proceeds.