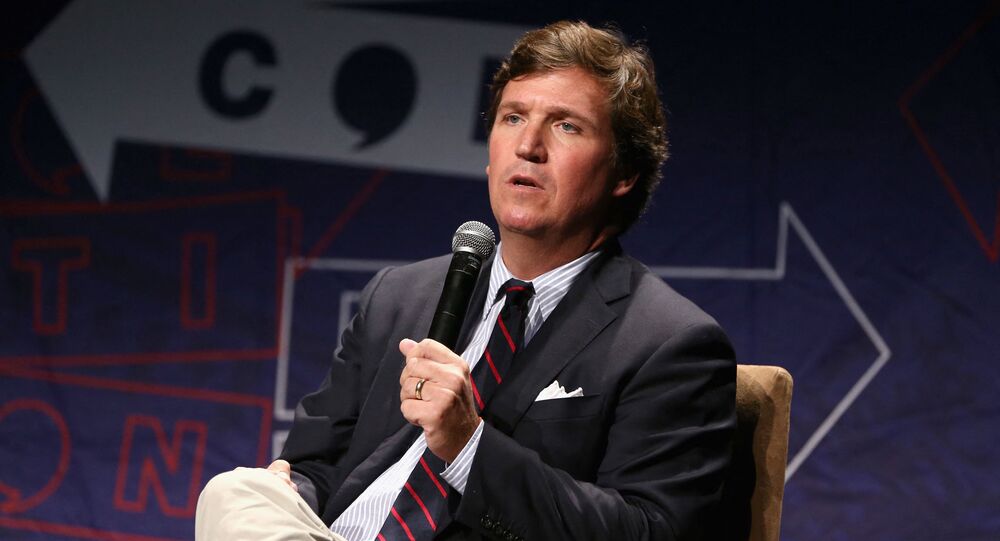 Late last month, Tucker Carlson claimed that the White House had enlisted the National Security Agency to snoop on his show's electronic communications "for political reasons".

Fox News host Tucker Carlson has claimed that he was trying to land an interview with Russian President Vladimir Putin when the US National Security Agency (NSA) was "spying" on his show.

Speaking on "Tucker Carlson Tonight" on Wednesday, the Fox News host said that in late spring, he contacted "a couple of people" he thought "could help get" him an interview with Putin.

Carlson stressed that he told nobody about his plans "other than" his executive producer Justin Wells.

"I wasn't embarrassed about trying to interview Putin. He's obviously newsworthy. I'm an American citizen. I can interview anyone I want and I plan to", the host said.

He explained he decided "to keep it quiet" because he suggested that "any kind of publicity would rattle the Russians and make the interview less likely to happen".

"But the Biden administration found out anyway, by reading my emails. I learned from a whistleblower at the NSA [that they] plan to leak the contents of those emails to media outlets. Why would they do that? Well, the point, of course, was to paint me as a disloyal American. A Russian operative. Been called that before. A stooge of the Kremlin, a traitor doing the bidding of a foreign adversary", Carlson said.

The anchor went on to say that US law obliges the NSA "to keep secret the identities of American citizens who've been caught up in its vast domestic spying operations", meaning he "should have been identified internally merely as a US journalist or American journalist".

“But that's not how I was identified. It was identified by name. I was unmasked. People in the building learned who I was and then my name and the contents of my emails left that building at the NSA and wound up with a news organisation in Washington. That is illegal. In fact, it is precisely what this law was designed to prevent in the first place. We cannot have intelligence agencies used as instruments of political control", Carlson noted.

According to him, the question is who allowed these agencies to act in such a capacity, something that Carlson said could be clarified by NSA Director Paul Nakasone and Director of National Intelligence Avril Haines.

The anchor concluded by arguing that "you can't have a democracy in a place where unaccountable spy agencies keep people in line by leaking the contents of their emails, discrediting them with their own emails, which they thought were private".

The remarks come after Carlson doubled down on his recent claims that the Biden administration had enlisted the NSA to spy on his show's electronic communications, and joined Republican lawmakers in pushing for a congressional probe into the matter.

© CC BY-SA 2.0 / Gage Skidmore / Tucker Carlson
NSA Says Tucker Carlson's Allegations He Is Agency Target 'Untrue'
In late June, the host insisted that he was being spied on by the NSA "for political reasons", referring to a whistleblower who had information that "could have only come from" accessing Tucker's own texts and emails.

Referring to the NSA allegedly spying on his show, the 52-year-old noted that "this is scary", and that the purported spying should be stopped "right away".