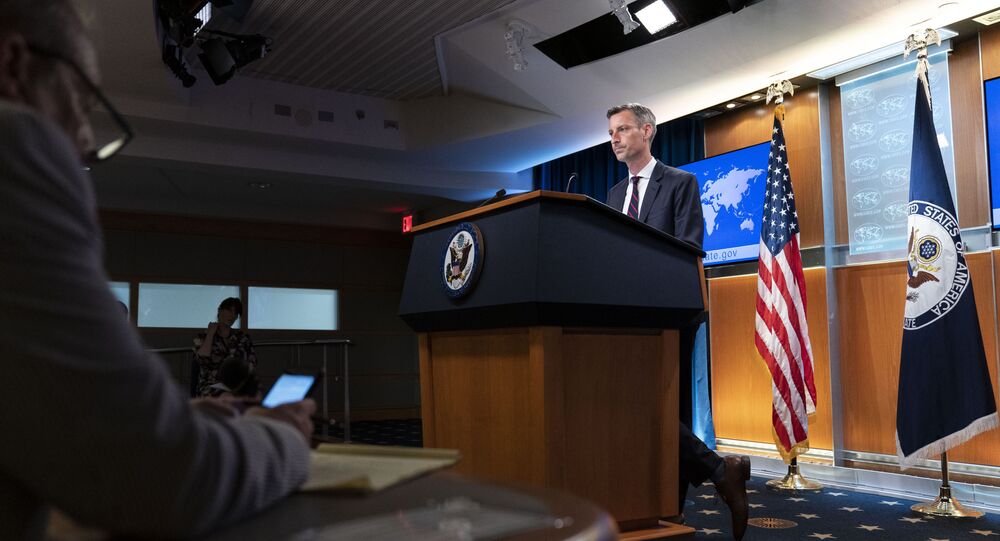 Soon after assuming office, Biden reversed a number of Trump-era initiatives, including those in foreign policy, slamming his predecessor for damaging America's global stance. At the same time, these also included international agreements that imposed certain obligations on the US government, no matter which administration occupies the White House.

The State Department spokesman Ned Price found himself in an awkward situation as Associated Press reporter Matt Lee pressed him on whether the Biden administration had indeed upheld international accords signed by the previous administration.

The exchange took place during the daily State Department briefing as Price mentioned President Joe Biden's decision to remove troops from Afghanistan, as well as the potential of maintaining negotiations with the Taliban given their onslaught in regaining control of sections of the country.

Lee confronted Price about his statements, which apparently looked more like an excuse, that they "inherited" the agreement between the Trump administration and the Taliban which paved the way for the pullout of American troops, and had no choice rather than to humbly follow it.

"I think if you recall, the president said in his remarks when he announced the military withdrawal that it’s not an agreement that this administration necessarily would have designed, but it’s one we inherited – that American troops would potentially come under attack starting on May 1st if they remained in the country", Price told Lee.

The journalist, however, was quick to point out that the new US administration wasn't in fact that consistent in following the international agreements signed by the previous administration, as there were clearly several that the Biden administration did not hesitate to abandon.

Lee also noted that in the case of Afghanistan, the decision to follow an earlier arrangement demonstrates the current administration's weak negotiating capabilities.

"This administration inherited plenty from the previous administration that it absolutely reversed. Are you saying that you’re not confident in your negotiating skills that you could have renegotiated with—that you couldn’t have renegotiated a deal with the Taliban and that the—and are you saying that the president, in fact, didn’t want to take troops out, didn’t want to withdraw?" Lee asked.

Price replied: "Yes, we changed quite a few US policies across a number of fronts, but I think you would be hard-pressed to find an international agreement that the United States signed on to during the last administration that this administration has jettisoned, done away with."

VIDEO: AP reporter calls out Biden State Dept spox Ned Price's bogus spin: "You just challenged me to come up with an international agreement that the [Trump administration] signed that you guys have walked away from, and I just gave you, I think, 3." https://t.co/JQAUmiDyuR pic.twitter.com/w3fywsTXD4

In response, ​Lee name several international agreements reached by the former administration and ditched by the current one.

Price clearly got confused as he was driven into a corner by the evidence.

"I mean, you just challenged me to come up with an international agreement that the previous administration signed that you guys have walked away from, and I just gave you, I think, three," Lee pointed out.

"This administration also understands the importance of when the United States signs its name and gives its word in the context of a formal international agreement, especially one where the stakes are profound for American—the American people, including our service members, deployed service members, that’s something that we take very seriously," he nevertheless emphasized.

In accordance with the February 2020 agreement between the US and the Afghan Taliban movement, the US pledged to withdraw its entire contingent from the country by May 1 this year in return for maintaining peace between the group and the Afghan government. The Biden administration said it would not be able to complete the withdrawal by the previously agreed date, postponing the deadline until the 20th anniversary of the September 11, 2001 terrorist attacks.