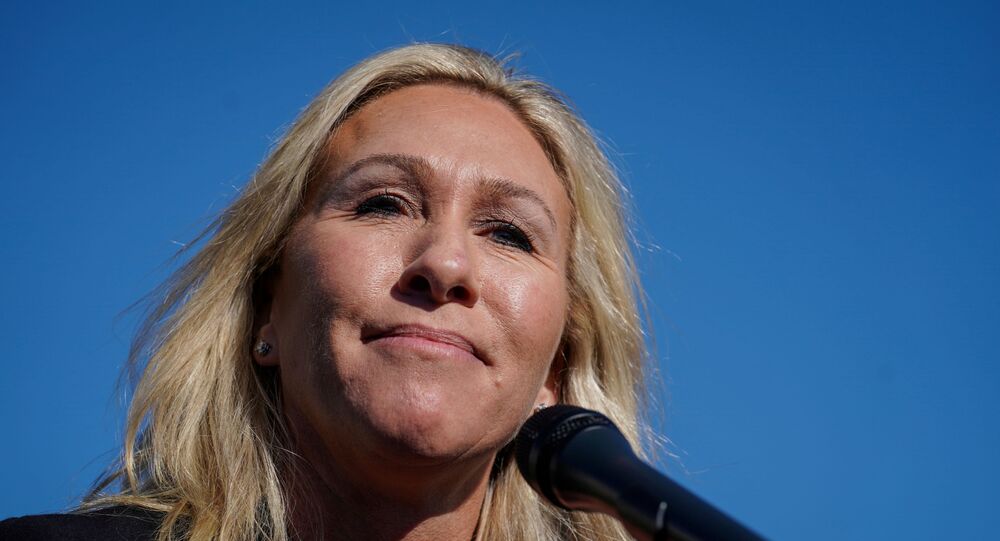 It’s been barely three weeks since US Rep. Marjorie Taylor Greene (R-GA) paid a visit to the Holocaust Memorial Museum in Washington, DC, and apologized for comparing COVID-19 safety measures to the genocide of Jews and other minorities by the Nazis. That must mean it’s about time for her to do it again.

Never one to disappoint, Greene put out a furious tweet on Tuesday in response to a clip of US President Joe Biden saying that more thorough community outreach may be necessary to ensure that those not yet vaccinated against COVID-19 get information about the shot.

“Biden pushing a vaccine that is NOT FDA approved shows covid is a political tool used to control people,” the Georgia Republican tweeted. “People have a choice, they don’t need your medical brown shirts showing up at their door ordering vaccinations. You can’t force people to be part of the human experiment.”

Biden pushing a vaccine that is NOT FDA approved shows covid is a political tool used to control people.

People have a choice, they don’t need your medical brown shirts showing up at their door ordering vaccinations.

You can’t force people to be part of the human experiment. https://t.co/S8qlstuSqL

​The term “brownshirts” is slang for the Sturmabteilung, a fascist paramilitary outfit that helped Nazi leader Adolf Hitler rise to power in 1930s Germany. They were known for their unofficial but organized street violence against leftist and other opposition parties, LGBTQ people and Jews.

The implication is that Biden would force Americans via threats or acts of violence to get one of the three COVID-19 vaccines approved for use in the US. However, there is no mandatory vaccination requirement for US citizens or residents, nor has there ever been.

Moreover, Greene’s claim that the Food and Drug Administration (FDA) hasn’t “approved” any of the vaccines is also incorrect. While the FDA hasn’t given any of them full approval, it granted emergency authorization for use of the Moderna, Pfizer-BioNTech, and Johnson & Johnson vaccines before each was administered to Americans.

The Biden administration set a goal of getting at least one COVID-19 vaccine shot to at least 70% of US adults by July 4, but has fallen short of that goal by about 3%. However, the vaccination campaign has been highly uneven, with more rural and politically conservative states and areas showing significantly lower vaccination rates than more liberal and urban areas. Daily new COVID-19 cases and deaths have fallen to their lowest point since the early weeks of the pandemic in the spring of 2020, a development credited largely to vaccinations. However, new variants of the virus that have proven resistant to vaccines threaten to sweep through the population, endangering people not yet protected by the vaccine.

Greene’s comments have been widely condemned, including by leaders of her own party in Congress and by the White House. The American Jewish Congress advocacy group said Wednesday that Greene “continues to prove that there is no limit to her brutal trivialization of the Holocaust for her own personal political power.”

“With antisemitism rising to levels unseen in decades, we call on all Members of Congress to denounce Rep. Greene,” they said.

It was only on June 14 that Greene said at a press conference outside the US Capitol building that she had “made a mistake” and wanted to “own it,” claiming a visit to the Holocaust Memorial Museum had awakened to her the error of comparing mask mandates, COVID-19 vaccine passports, and other safety measures to the genocide of millions of Jews, Roma, LGBTQ people, Slavs, and other minorities by the Nazis.

“The horrors of the Holocaust are something that some people don’t even believe happened and some people deny, but there is no comparison to the Holocaust,” she said, adding “and there are words that I have said remarks that I’ve made, that I know are offensive, and for that I want to apologize; antisemitism is true hate, and I saw that today at the Holocaust Museum.”

An estimated 11.5 million people were killed in large-scale massacres and in the industrialized concentration camp system established by the Nazis across the parts of Europe they conquered in the 1930s and 1940s, 6 million of whom were Jews, accounting for two-thirds of the European Jewish population at the time.