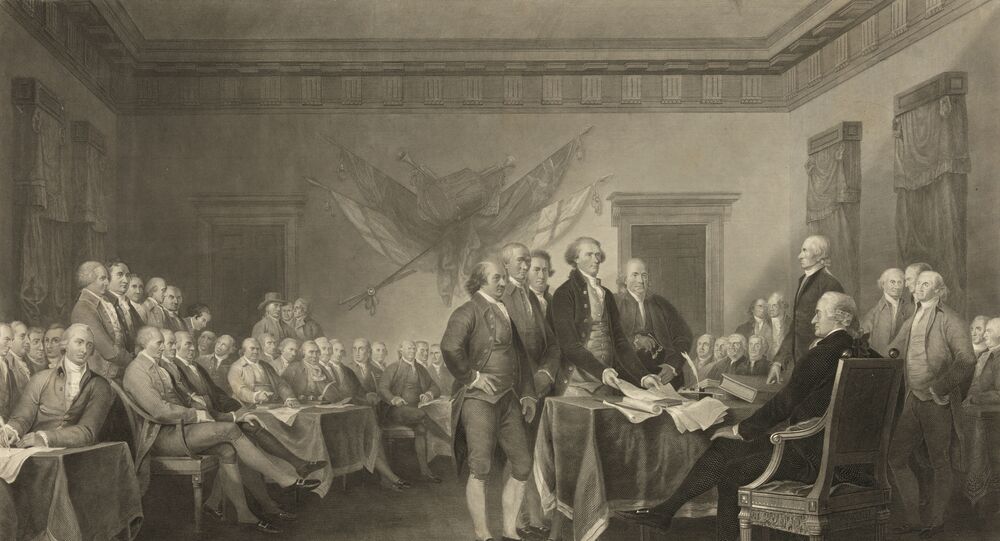 Every year on Independence Day, the US news broadcaster publishes and reads the Declaration on the air, but this year's edition was quite different from previous years, as it stated that following the 2020 anti-racism mass protests and riots in the nation, " the words in the document land differently."

The broadcaster also warned its readers that the 245-years-old document contains a "racist slur against Indigenous Americans."

"It famously declares 'that all men are created equal' even though women, enslaved people and Indigenous Americans were not held as equal at the time," NPR continued.

The publication then discussed how Thomas Jefferson's document was altered by Congress to eliminate condemnation of slavery in order to "win support from Southerners."

"But a racist slur about Native Americans stayed in," the media stressed.

In this thread of the Declaration of Independence, you can see a document with flaws and deeply ingrained hypocrisies.

It also laid the foundation for this country’s collective aspirations — the hopes for what America could be. pic.twitter.com/znLSGKWLaj

​The article went on to address how Native Americans are treated throughout the document, including how they are referred to as "merciless Indian savages," and to present the thoughts of an author who is a member of indigenous Ojibwe people on how the Declaration affects Native Americans in the US.

He also added that had the Native Americans not aided the colonists during the Revolutionary War, the colonies would have probably lost the war with the Crown.

Most fatuous piece I"ve seen in years. The declaration of Independence was about the US + their grievances w/ the King.

1% touches on their grievance w/ the king for being Indian savages to, as we'd put it today, commit war crimes upon Americans. Which is historically correct. https://t.co/iLC7pCZ6G9

Today is a great day for America to declare its independence from NPR which is currently attacking our Constitution. Why should we pay for them to express hatred against us?#DefundNPR

And many users noted the need to take into account the context of the era in which this state-forming document was adopted.

In 1776 there were literally zero countries on Earth where women were considered equal to men. Slavery and conquest were also nearly universal.

So yes, this is a completely idiotic and probably intentionally misleading headline. #DefundNPR https://t.co/Ep4sKykIfe

I'm sure the hundreds of thousands who died in the bloodiest war America has ever known wish that wasn't the case.

Looking at the 18th century through a 21 Century moral lens is awfully convenient considering. https://t.co/OmilzxaMZS

The world was very different then.

What the Founders and Framers did went unprecedentedly and boldly far to ensure that individual liberty would continue to flourish and to expand.

This is cause for rejoicing, not condemnation. https://t.co/vDxfncuyzL

​However, another group of users found it appropriate for the media to draw parallels between the language of the declaration and the current political environment, by saying, for instance, that the hypocrisies within the document are "factual and truthful."

Moreover, on July 4, Democrat Representative Maxine Waters took to Twitter to claim that the Declaration of Independence's creeds did not grant "equal rights" to black people or women.

July 4th... & so, the Declaration of Independence says all men are created equal. Equal to what? What men? Only white men? Isn't it something that they wrote this in 1776 when African Americans were enslaved? They weren't thinking about us then, but we're thinking about us now!

The 82-year-old representative went on to explain that present laws continue to keep some groups from being treated equally, citing voting rules and an increase in police violence against black people as examples.

Her claims were echoed by the House freshman Representative Cori Bush, also a new member of the left-wing progressive group of legislators known as "The Squad", who said on Sunday that Independence Day is just a holiday for white people.

"When they say that the 4th of July is about American freedom, remember this: the freedom they’re referring to is for white people," she wrote on her Twitter. "This land is stolen land and Black people still aren’t free."

On Sunday, during his speech to a crowd of first responders, military members, and their families on the South Lawn of the White House, US President Joe Biden alluded to some of what the representatives had tweeted, saying in a reference to the quote of all men being equal, "While we have never fully lived up to the words but we never give up on them."

"They continue to animate us and remind us at our best, we as Americans believe in honor and dignity. Treat everyone with dignity and respect, giving hate no safe harbor," Biden stated.

California Pupils Were Tasked With 'Uncomfortable' Analysis of 'Why I'm a Racist' Op-Ed, Report Says