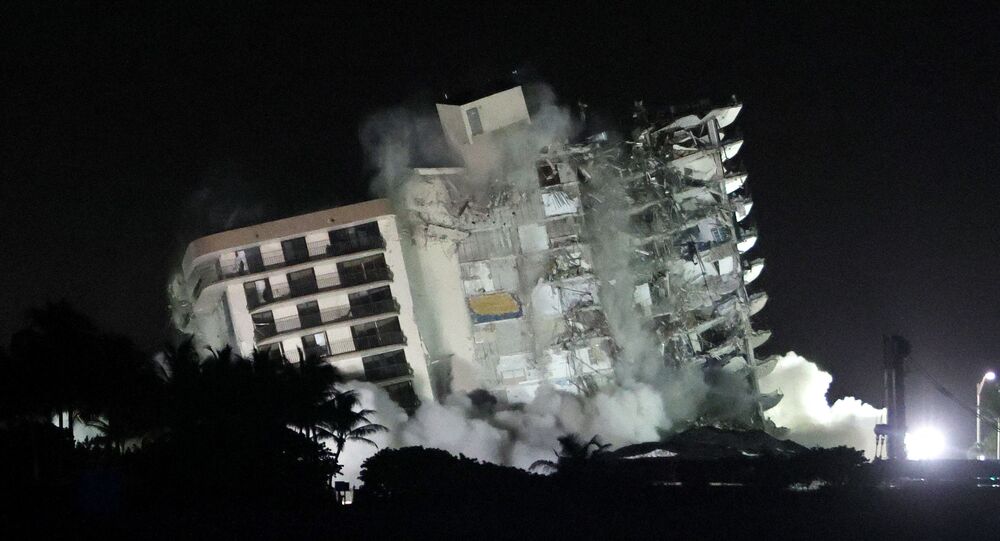 The Surfside condominium building collapsed on 24 June, claiming at least 24 lives, with over 120 people still unaccounted for.

Surfside authorities carried out the demolition of the wrecked Champlain Towers South on late Sunday, setting off explosives and putting the rest of the collapsed building on the ground.

Earlier, Miami-Dade County police informed the public that the demolition would be conducted between 10:00 p.m. and 3:00 a.m., local time.

The remaining part of the collapsed condo building in Surfside, Florida has been demolished. WCK teams are on site serving meals to crews as they shelter in place and await to re-enter the site. Today is the 11th day #ChefsForFlorida has been active alongside first responders. pic.twitter.com/fq12SheETa

​At a news conference, County Mayor Daniella Levine Cava told reporters that the rescuers would await the "all-clear" after the controlled demolition and then immediately return to the task of trying to locate any survivors buried under the rubble.

"We are standing by. We are ready to go in, no matter the time of night", Cava said.

Prior to the demolition, the search efforts were put on hold to prepare for the controlled explosion.

The tragic collapse of the condo building in Surfside claimed at least 24 lives, with 121 people still unaccounted for. The cause of the disaster remains to be determined.