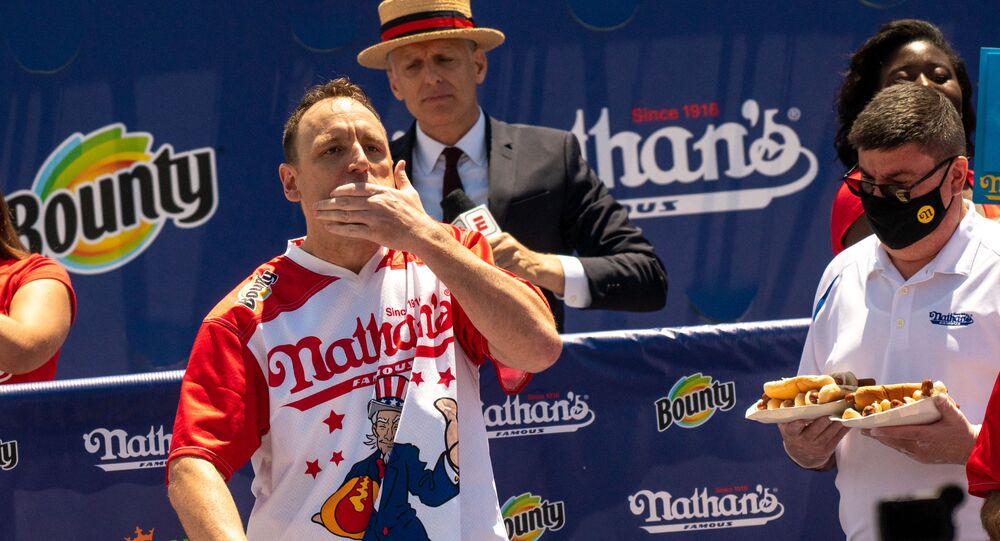 The 14th annual Nathan’s Hot Dog Contest marked another world record in consuming hot dogs, with Joey Chestnut fabulously sliding past his own world record and having 76 dogs - one more than in 2020.

The contest took place at Maimonides Park stadium, with Chestnut hoovering hot dogs and buns in front of the cheering audience. The champion out-gulped his closest competitor by 26 dogs.

According to the New York Post, Chestnut held the lead for the entire contest, which lasted about 10 minutes.

The Internet hailed Chestnut as "the most dominant athlete (in their sport) of all time", with a video of him completing the 76-hot-dog-feast being shared online.

Joey Chestnut is the single most dominant athlete (in their sport) of all time.
pic.twitter.com/fWLyMMU2WG

​Before again smashing his old world record, Chestnut took to Twitter to congratulate fellow Americans on the Fourth of July, saying that he was "hungry for hot dogs! Hungry for a 14th title! Hungry for the future!".

Nathan’s Hot Dog Contest is held annually on Independence Day, the day the US Declaration of Independence was adopted by the Continental Congress in 1776.