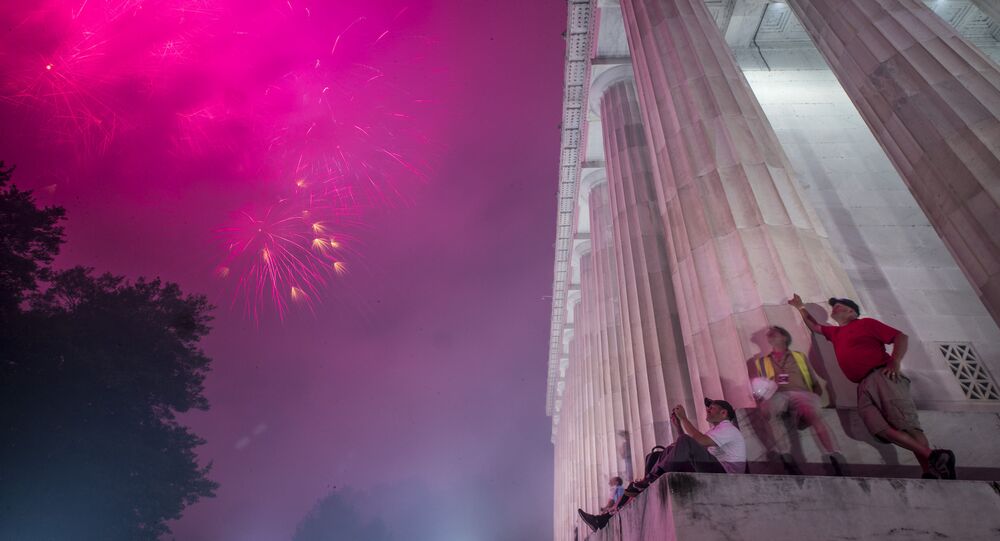 On 4 July America celebrates Independence Day – the federal holiday commemorating the signing of the Declaration of Independence in 1776, when Congress declared that the nation was no longer under British rule.

Independence Day celebrations are typically marked by nationwide parades, parties, sports, concerts, barbecues, street parties, and firework displays, with people dressing up in the colours of the US flag: red, white, and blue.

After the COVID-19–triggered washout of 2020, when events were cancelled due to the ongoing pandemic, this year some states, mainly Northern Virginia, have gone all out to mark the 245th Independence Day. Others, like Maryland, notwithstanding the easing of lockdown restrictions amid the vaccination rollout, are instead erring on the side of caution, arguing that celebrations should be low key to avoid spreading the virus.

In the nation’s capital, President Joe Biden is hosting a group of essential workers and military families on the South Lawn of the White House on Sunday. The reported guest crowd of around 1,000 will be the largest to converge at the US president’s residence since the coronavirus pandemic began. However, everyone attending has been requested to get tested for COVID-19 before the event and wear masks if they are not fully vaccinated, according to White House Press Secretary Jen Psaki.

Thomas Jefferson, the nation's third president, was the first to celebrate Independence Day at the White House in 1801, complete with horse races, a parade, and festival, according to the White House Historical Association.

4 July, or Independence Day, is a national federal holiday in the United States, marking the day the Declaration of Independence was adopted in 1776.

Introduced by the Second Continental Congress, the statement outlined that the 13 American colonies were united, independent states and no longer subject to the rule of the British monarchy. Formally declared on July 2 1776, the final version of the declaration was approved by Congress on July 4.

Do we still hold these truths to be self-evident? Take time to read the Declaration of Independence this weekend. #IndependenceDay https://t.co/oTGayPHSub pic.twitter.com/Un95RJThVv

George Washington commemorated 4 July by ordering a double ration of rum for his soldiers at Ross Hall, near New Jersey and an artillery salvo tribute. Docked ships were decked out in patriotic coloured bunting.

People across the nation marked the day with toasts, speeches, army parades, prayers, music, and fireworks.

Federal employees finally got a federal holiday on the day only on 28 June 1870 after US Congress passed an appropriate law. In 1938 congress reaffirmed it as a paid holiday for federal employees.

Most celebrations on 4 July take place outdoors, with all manner of patriotic activity.

Each state holds parades and concerts in their cities. At noon, a salute of one gun for each state in the United States, called the "salute to the union," is fired on Independence Day. As for fireworks, New York City typically boasts the largest display in the country, sponsored by Macy's.

Previous celebrations have witnessed a total of over 22 tonnes of pyrotechnics set off.

Other notable fireworks displays are in Seattle on Lake Union, San Diego over Mission Bay, in Boston on the Charles River, and on the National Mall in Washington, D.C. Baseball and American football games have also become synonymous with the day.

Patriotic evergreen songs like "Star spangled banner," "Yankee Doodle," and "God Bless America" can be heard blaring against a backdrop of barbecues, camping, and fireworks, with politicians taking the opportunity to praise the nation's heritage, history, and people.

And of course, Americans tuck into their national dishes, from burgers to fried chicken, to hotdogs and cookies, as they either choose to mingle outside, or gather with families and friends in their homes, decorated in patriotic colours and sporting US flags.

The U.S. has made great progress in the fight against #COVID19, but more needs to be done to reach freedom from the virus. As variants spread, vaccines will help protect you and the people you love. Read more about the current state of the pandemic: https://t.co/F4bAyObDp1. pic.twitter.com/DlXXHnHA80

Ahead of the celebrations this year, the Centres for Disease Control and Prevention released guidelines saying fully vaccinated US residents would be able to attend gatherings in homes or indoors without wearing masks or practicing social distancing.

France to Send Second Statue of Liberty to US for Independence Day, Reports Say