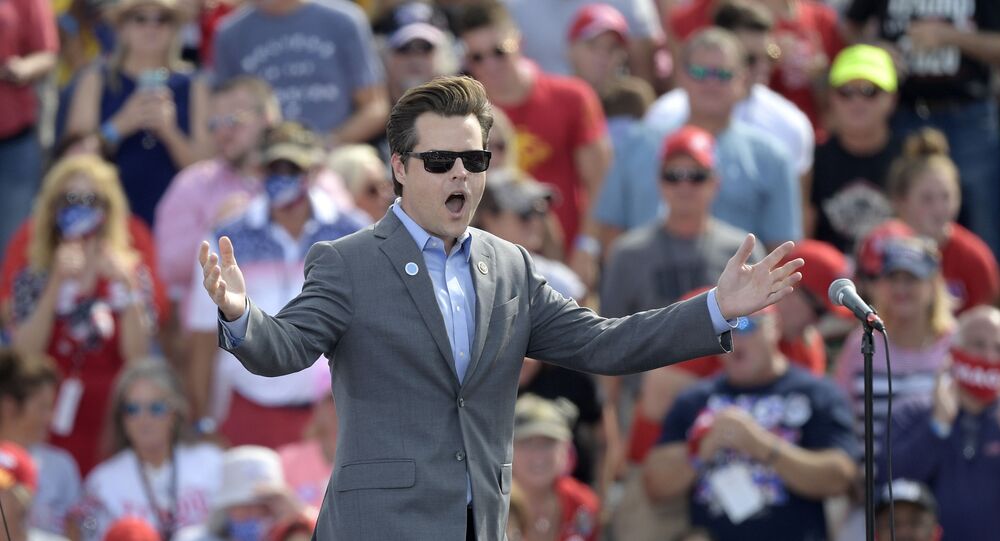 Ex-POTUS Donald Trump has been guarded about his future political ambitions and a potential 2024 presidential campaign. Some pundits perceive his current campaign-style rallies as a sign that he might be gearing up to run again.

Rep. Matt Gaetz has vowed to nominate former President Donald Trump to be the next speaker of the house as he addressed a crowd at the 45th POTUS’s campaign-style rally in Sarasota, Florida on Saturday.

Matt Gaetz states that when the Republicans take back the House of Representatives, he commits to vote for Trump as Speaker of the House. pic.twitter.com/4kPiuVx6pP

Can Outsider Be House Speaker?

It's not expressly stated in the Constitution that the speaker of the house must be a member of the chamber, as "the House of Representatives shall chuse (sic) their Speaker and other Officers."

Nevertheless, many legal experts who have studied the issue at length believe that the Founding Fathers intended for the Speaker to be chosen from a “pool of elected representatives."

In 2015, when the Republicans were debating who should succeed John Boehner as speaker of the House, the idea was floated of injecting an outsider, such as former House speaker Newt Gingrich or Colin Powell, the former secretary of state.

At the time, the Clerk of the House said the Speaker "has always been (but is not required to be) a House Member."

"It would have been unthinkable for the most populous house not to have its leader be part of the representatives who were elected by the people," David Forte, a constitutional scholar at Cleveland State University, was quoted as saying by NBC News.

The all-day event at the Sarasota Fairgrounds, cosponsored by the Republican Party of Florida, was tailored to support Trump’s Make America Great (MAGA) agenda and underscore the successes of his administration.

The event, complete with fireworks ahead of this year's US Independence Day, marked on Sunday, July 4, was the former president’s second such event held since he vacated the White House in January.

The July 3 rally drew thousands who flocked well in advance of the day to occupy chosen vantage points from which they listened to Trump speak.

The ex-POTUS started off by calling for "free and fair elections and strong borders" and upon switching to politics stated that "in just five months the Biden administration has launched an all-out assault on everything we cherish and we value."

On international policy, he reiterated that throughout his White House stint he had forged good relations with the leaders of Russia and China, unlike the Biden administration.

"Our leaders are weakly bowing down to Russia, Iran, and communist China," said Trump.

Trump’s recent rallies have fuelled speculation that he will run for president again in 2024.

In Florida, he urged his supporters to back his allies in their mid-term campaigns, as Republicans seek to take back control of Congress from the Democratic Party next year.

"We are looking at the election, more than looking at it," said Trump about 2024, prompting cheers from the Sarasota crowd. He wrapped up by vowing that “our movement is far from over, in fact our movement has only just begun."