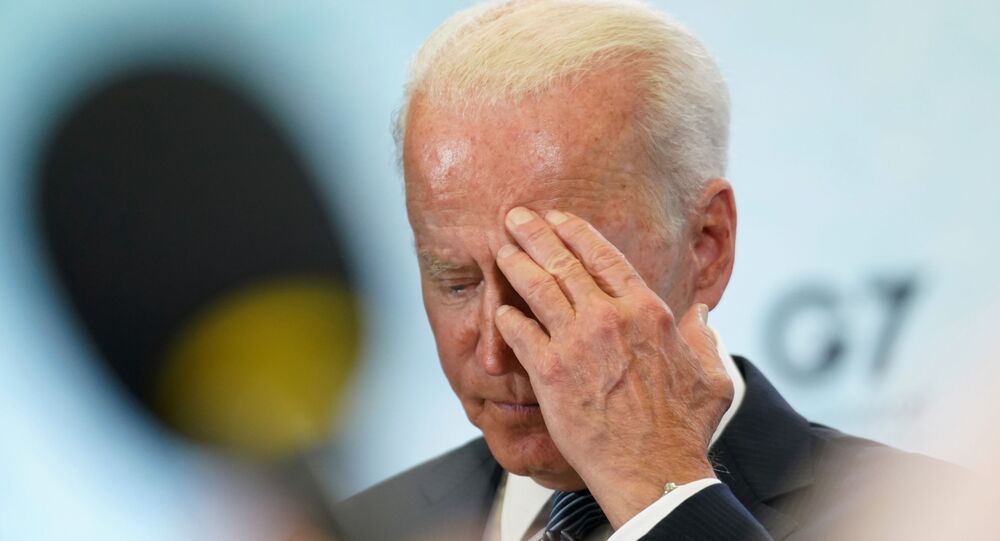 In June several GOP Representatives, led by former White House physician Ronny Jackson, penned a letter to Joe Biden, asking him to take a cognitive test to "follow the precedent set by former President Trump to document and demonstrate sound mental abilities". They cited the US President's increasing "mental decline and forgetfulness”.

Donald Trump’s former White House physician has urged the Democrats to follow through with their earlier demands and evaluate the cognitive ability of sitting President Joe Biden to serve in the highest office in the US.

Amid speculation regarding the mental aptitude of the 45th POTUS, Trump claimed he’d “aced” the Montreal Cognitive Assessment (MOCA), a 30-point exam that tests for memory impairment.

"The far left and the mainstream media were demanding that be the new standard for anybody who’s going to lead our country and be our Commander-in-Chief and our head of state. I’m just saying I agree with them at this point -- we need to get it done," Texas Republican Rep. Ronny Jackson said in an interview with Fox News on Saturday.

Jackson had administered the test for Donald Trump at the start of the then-president’s second year at the White House.

When I was President Trump's White House physician, the media ATTACKED him because they falsely claimed the cognitive exam he ACED was "too easy." Well, if it's SO EASY like the media said, why won't Biden take the same test and release the results? Cognitively impaired! pic.twitter.com/OrNjtxbib2

Pointing to the growing chorus of voices questioning whether Joe Biden was fit to be president, the ex-WH physician said:

"I think he’s demonstrating every single day that there is something going on. You don’t need to be a physician to look at this behavior and see there’s something concerning happening."

According to Jackson, while Biden had always been gaffe-prone, there were increased instances where the president appeared "confused."

"You can go back – there’s forty years of tape of this man – he’s always made gaffes and stuff but these are different, he’s confused, he’s disoriented, said the freshman Texas congressman. According to Jackson, Biden was “not ageing gracefully”:

Ronny Jackson emphasized that while the White House had announced in June that Joe Biden was scheduled to take his physical exam "later this year", it was not specified whether the cognitive exam will be included during the health screening.

"I’m just asking them, when you do the physical exam include the cognitive assessment. As far as I’m concerned the standard precedent has been set and they need to follow and do the same," said the Texas Republican.

He hailed the precedent set by Donald Trump, who had taken the exam, which, he clarified, did not determine IQ, but tested for age-related issues, such as dementia and cognitive decline.

Back in October 2020 Speaker of the House Nancy Pelosi – a democrat – had introduced a bill that would create a bipartisan commission of health advisors to evaluate the ability of a president to carry out his duties.

"This legislation applies to future presidents, but we are reminded of the necessity of action by the health of the current president. It’s not about any of us making a judgment about the president’s well-being," Pelosi said at the time.

Then-president Donald Trump defended his mental fitness to hold office in July 2020, boasting he had “aced” the exam he allegedly took in 2018 at "Walter Reed Medical Center in front of doctors" assessing his cognitive capabilities, and claiming medics had been amazed by his ability to recall a simple string of words.

Hannity marvels over Trump cognitive test score in live interview: "He didn't get one question wrong, 30 out of 30, wow!" pic.twitter.com/5q4XRsjBqp

​Trump has repeatedly urged his successor Biden to take a test as well.

‘Not Physically or Cognitively Fit

Ronny Jackson has been one of 14 Republican lawmakers who earlier signed a letter calling for the 78-year-old Democrat to take a cognitive exam. The letter cited several examples of potential memory lapses, including seemingly forgetting the name of his Defense Secretary, narrating an Amtrak story with a garbled timeline or failing to recite the often-quoted first line of the Declaration of Independence in March 2020.

Joe Biden forgets THE CREATOR from the Declaration of Independence. Calls God "the thing."

“We hold these truths to be self-evident,” Mr. Biden, said. “All men and women created … by the — you know — you know the thing.”#TheCreator #Creatorhttps://t.co/HWXVGX3Wws pic.twitter.com/cLeQeHHgKV

​"Unfortunately, your mental decline and forgetfulness have become more apparent over the past 18 months," Jackson and the GOP reps wrote in a letter to Biden, the White House physician and Dr. Anthony Fauci.

"We can't sit on this any longer. He's not physically or cognitively fit to be our president right now," Jackson said on Fox News’ "Hannity" on 17 June.

Concerns have also been voiced about Joe Biden’s physical health as well, particularly after he slipped twice while ascending the stairs of Air Force One in March.

​President Joe Biden, whose election campaign was marred by gaffes and 'senior moments', has continued in the same vein, with a slew of incidents that social media quickly picked up on. If attributed to someone else, like his predecessor Trump, they would have likely been trumpeted about in the press.

​In another recent speech, the POTUS struggled to remember the name of his Pentagon chief Lloyd Austin.

​More recently, Biden displayed bizarre behaviour at a White House press conference as he repeatedly leaned towards the mike to whisper his responses to questions from the press.

This week he's whispering at them. pic.twitter.com/2R54bmbZp5

How Joe Biden Broke Royal Protocol When He Visited the Queen