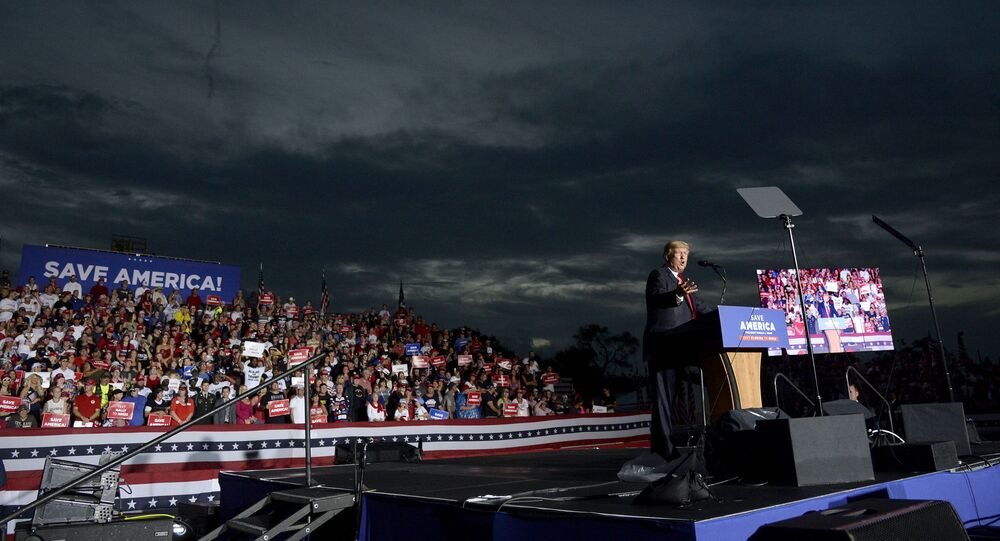 WASHINGTON (Sputnik) - Former US President Donald Trump, at a Saturday "Save America" campaign-style rally in Sarasota, Florida, again critiqued the administration of US President Joe Biden and urged supporters to vote Republican in the 2022 midterm elections.

Trump started off by calling for "free and fair elections and strong borders" and wished everyone a happy 4th of July. He also sought a moment of silence to honor the Surfside building collapse victims.

"May we have a moment of silence for the victims and families of the horrible building collapse in Surfside, Florida," Trump said, calling it a "terrible, terrible" tragedy. The Surfside incident occurred last week as a 12-story residential building partially collapsed. The death toll stands at over 24, while at least 124 people are still missing.

Switching his attention to politics, Trump said that "in just five months the Biden administration has launched an all-out assault on everything we cherish and we value."

The former president stated that US streets were being taken over by criminals, and that the southern border is "being erased before our very eyes."

Trump again claimed that he had good relations with the leaders of Russia and China during his presidency, comparing his reign to that of the Biden administration.

"Our leaders are weakly bowing down to Russia, Iran, and communist China," Trump said to the Sarasota crowd.

Trump critiqued the Biden administration for its approach to dealing with the COVID-19 coronavirus and again blamed the pandemic on China, pronouncing that Beijing should be charged $10 trillion in reparations.

Trump also expressed the notion that it was "so unfair, so crazy" that men are allowed to play in women's sports.

The former leader concluded his performance by saying that the US has "a truly sick election system."

"This country is in big trouble when an election cannot be open and free and fair and not stolen or rigged," Trump alleged, adding that the only way to "bring our country back" is with a Republican Congress. He promised more jobs and fair trade would come and free speech "which we don’t have" would be restored if Democrats are not in power. Trump declared that the Republicans need to win in next year’s midterm elections.

During a previous "Save America" rally in Ohio at the end of June, Trump called the Biden administration's performance a "catastrophe" and criticized the White House for a crime wave in major US cities, a migrant crisis at the southern US border and a dismal economic situation marred with high inflation.

Trump also criticized the Biden administration for what he called failures in foreign policy, including by suggesting that China and Russia are humiliating the United States, while continuing in a similar vein regarding a failure to prevent the construction of the Nord Stream 2 pipeline. Trump brought up the Nord Stream issue again on Saturday in Florida.

While some pundits have interpreted the Trump rallies as a signal he could run in the 2024 presidential election, others have said things are not clear cut. Trump previously indicated that he planned on running again, but now he says the decision depends on the state of affairs in the United States and on the Republican Party.