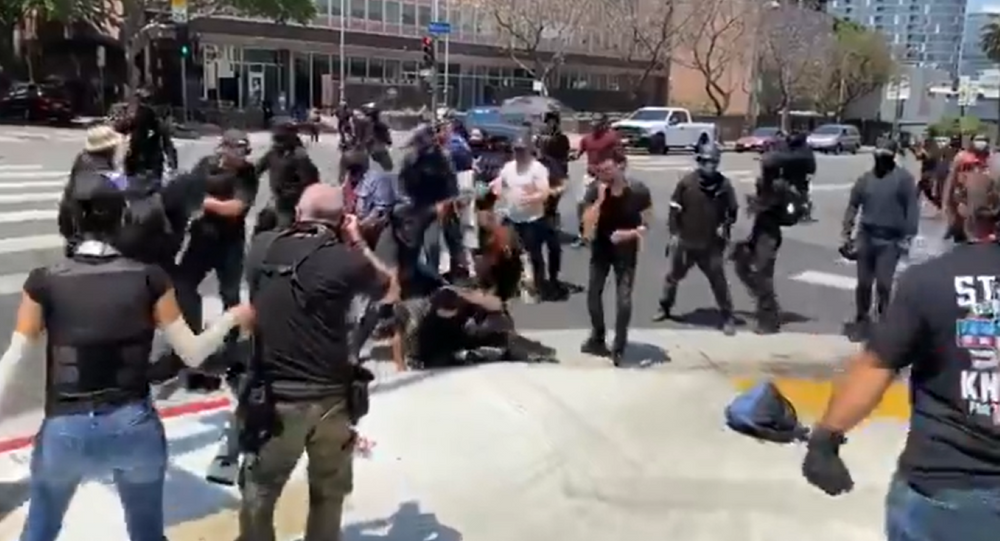 Protesters Clash in LA After Allegations of 'Trans' Exposing Male Genitals to Women, Minors in Spa

Earlier last week, a video posted by a woman who visited Wi Spa in Los Angeles emerged online, with her lamenting that a male exposed his genitals in a women's wet spa area, a space in which he was allowed into after asserting that he was female.

Heated protests occurred on Saturday in the vicinity of a California spa where, according to a female customer's complaints voiced in a viral video, a male who identified as a woman exposed their genitals to both adults and minors in the women's area.

What turned out to be chaotic squabbles started off as groups arriving at the Wi Spa salon in Los Angeles to support a woman who earlier shared a video about a "transgender" showing up in the spa and "exposing" themselves. According to the narrator, the visitor identified as female and was therefore allowed into the women's area.

"The Wi Spa allowed the man access just because he calls himself a woman. This man was naked expoding [sic] his testicles and penis slinging left to right in front of young girls, teens, and grown women", the user, @cubanaangel, wrote in an Instagram post last week.

Those who supported the woman on Saturday apparently clashed with other protesters, some of whom were wearing all black, with masks. Some netizens described them as Antifa protesters and shared videos allegedly filmed on-site.

Antifa assault street preachers who tried to attend the Wi Spa protest in Los Angeles. Several people have been assaulted today but police don’t appear to be responding at all. pic.twitter.com/p5mblPgXYG

One man is beaten on the ground, another man gets docked to the face.

Breaking: A mob of antifa (look at their flag if it’s not obvious enough) punch a man, then chase & assault a videographer at the Wi Spa protest in Los Angeles. cc @pressfreedom, @uspresstracker, @spj_tweets pic.twitter.com/GiIlDzuiKI

LA Antifa taunt older woman. They knocked her hat off and mess with her hair until they chase her to back to her car while using an acoustic device to yell at her.
(1/2) pic.twitter.com/WdXgrYyWLW

At the Wi Spa protest in Los Angeles, a lone young man gets his sign ripped up by an antifa. A mob of antifa then assaults him to the ground & kicks him after he got out pepper spray. pic.twitter.com/V4IPW4lqbA

​Other people claimed that "transphobes" and "Proud Boys" also took part in the clashes, sharing videos of them allegedly threatening someone with a gun and "getting aggressive".

BREAKING: Just had a gun pulled on us by transphobes at Wi Spa. He reached into a backpack and grabbed it. When I asked him what he grabbed, he said “something to shoot you with” to me. pic.twitter.com/hCcTXtPN7V

Transphobes hanging out with LAPD. One of them gets aggressive and walks up to me— LAPD doesn’t seem to mind the transphobes being violent. pic.twitter.com/kcI7AMPwS5

​Footage showing police engaging in the skirmish was also posted, revealing officers creating a line between the two groups and clashing with the protesters.

Antifa gets rowdy & words are exchanged between the two groups. pic.twitter.com/RaIlIld4pf

​One clip shows a dumpster dragged into the middle of the street and set on fire.

LA Antifa wheel a dumpster into the street and set it on fire. pic.twitter.com/NI6aNoRni6

​Los Angeles Police Department (LAPD) officer Mark Lopez, cited by Fox News, said that no arrests were made as the result of the clashes, but at least five crimes were reported against five separate victims.

"Three of them were victims of assault and battery, and the other two were assault with deadly weapon," he said.

The now-viral initial video from the spa was posted on Instagram on 24 June. A video with a response from spa staffers also emerged online, in which they appear to say that the rights of transgender customers are protected by California law, as other customers are heard in the background demanding a refund.

In a statement to Los Angeles Magazine, Wi Spa defended itself, saying: "Like many other metropolitan areas, Los Angeles contains a transgender population, some of whom enjoy visiting a spa. Wi Spa strives to meet the needs of all its customers."