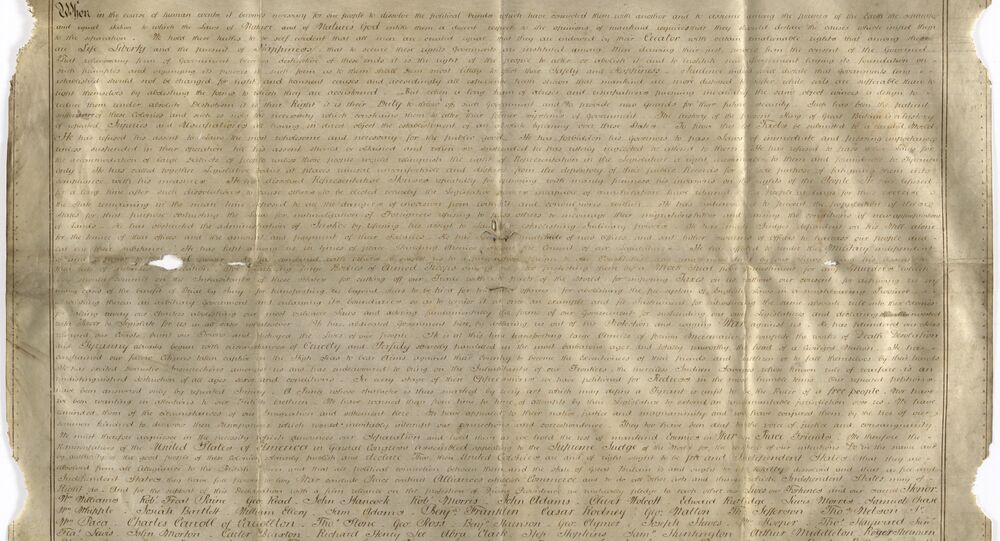 Copy of Historic US Declaration of Independence Discovered in Scotland Sold for $4.4 Mln

The signing of the Declaration of Independence was of tremendous importance, since its main idea was to make the historic decision to unify the British colonies of the present-day US eastern seaboard into an independent nation; 13 of these colonies would later become the first United States of America.

A copy of the historic US Declaration of Independence was recently discovered in a Scottish attic, according to The Scotsman, a media outlet.

“I was looking through a pile of papers which had been brought down from the attic, amongst which was a folded-up vellum document,” expert Cathy Marsden of the Lyon & Turnbull auction house said as quoted by the New York Post.

According to reports, the copy is a representation of the original 1776 document.

A copy of the United States Declaration of Independence discovered in an attic in Scotland has sold at auction in the US for more than £3 million. pic.twitter.com/427q5JnCRH

​“And I suddenly thought this could be a really important thing. … I was thinking, yes, this document, which was found in an attic in this family home in Scotland and had been brought out as something curious and interesting, looks like it is really special,” Cathy Marsden added.

The Declaration of Independence was adopted on 4 July 1776 by the Second Continental Congress in Philadelphia, Pennsylvania.