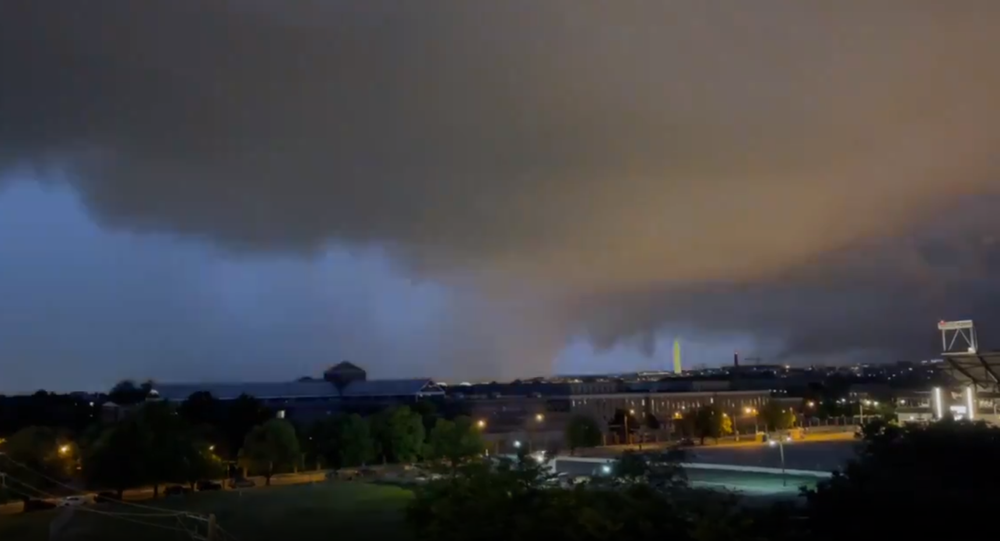 A day after heavy thunderstorms swept across the Washington, DC, region, the US National Weather Service has confirmed that the last and most destructive storm contained two tornadoes, one of which passed close to the White House.

According to the federal meteorological service, an F1-strength tornado with 90 mile-per-hour winds formed in Arlington County, Virginia, at roughly 9 pm on Thursday evening and passed over the town of Rosslyn and the Potomac River before dissipating on the National Mall, a large park at the center of Washington, DC. Moments earlier, an emergency alert for a tornado warning sounded off on residents’ phones, alerting them to immediately take cover.

The tornado was 125 yards wide (114 meters) and it’s 4.4-mile-long path takes it between the Washington Monument and the White House. Tornados’ power is rated F0 to F5 on a scale developed by meteorologist Ted Fujita, reflecting increasing wind speed.

The same storm produced a second tornado, rated slightly weaker at F0-strength with winds of 80 miles per hour, that touched down in eastern Washington, DC, a few minutes later. That tornado was 75 yards (68.5 meters) wide and cut a path about three-quarters of a mile long through mostly residential neighborhoods.

Videos captured the storm as it swept into the city. In the footage, a low cloud can be seen ahead of the main storm. That is the wall cloud, showing where the powerful updraft feeding the tornado is located, but it isn’t the tornado itself, which is shrouded in the dense rain that sweeps in behind it.

​According to the Washington Post, a powerful bow-shaped storm front swept through the capitol region on Thursday night, and at the center of it a massive supercell storm that made a bulls-eye for downtown Washington.

A video of radar readouts as the storm passed over the region compiled by AccuWeather senior editor Jesse Farrell shows an axis of rotation passing through Rosslyn, Virginia, into Washington, DC, and passing over the area immediately proximate to the White House grounds before exiting the city to the east. The rotation lines up precisely with the NWS’ reports in Virginia and DC of tornado damage, as well as a sharp change in wind direction just as the tornado is supposed to have touched down in the H Street neighborhood north of the US Capitol.

Here's at 9 p.m. on the button when the worst of the damage was occurring in Arlington. The tree damage appears commensurate with perhaps a broad EF0 tornado and the rotation was definitely there, but also possible RFD winds. Will await NWS preliminary assessment. pic.twitter.com/Mddy9nVxeQ

​Video captured by DC residents shows the storm’s fury, which brought powerful winds and drenching rain even a far distance away from the tornado itself.

​The storms knocked out power for thousands in the region and snapped trees across the city, including some of the huge mature trees that dominate the National Mall.

​Tornadoes in DC are rare but not unknown. Two weak tornadoes spawned from an April 2017 storm, one of which caused damage at the Tidal Basin. Another far more powerful storm destroyed much of the town of La Plata, Maryland, in 2002, which rated F4 on the Fujita scale.