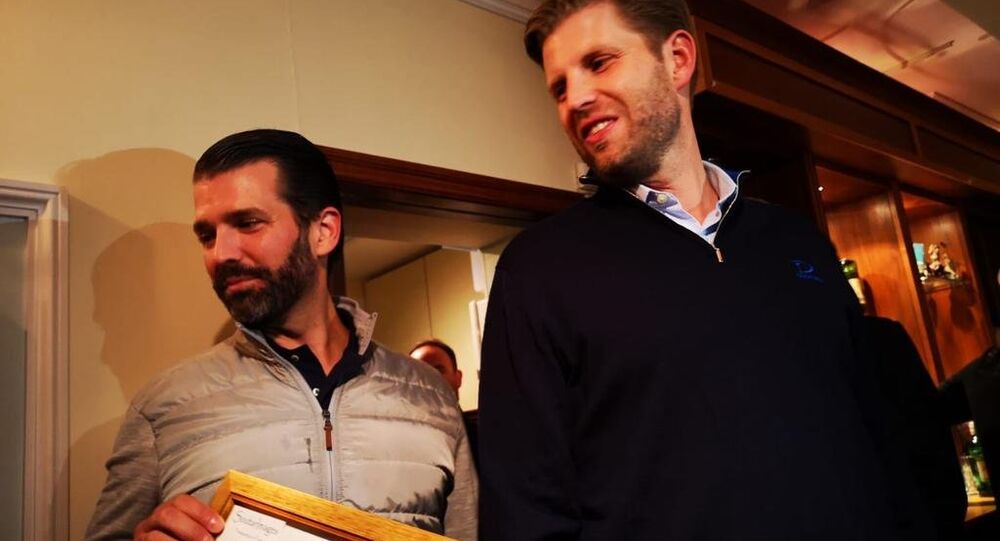 On Thursday, New York prosecutors charged the Trump Organisation, its payroll subsidiary, and long-time chief financial officer Allen Weisselberg with 25 counts related to a range of suspected crimes, including conspiracy, the falsification of business records, and criminal tax fraud going back to 2005.

Former president Donald Trump’s eldest sons, Don Jr and Eric, have lashed out at prosecutors over charges levelled against the Trump Organisation and its CFO.

“This is a farce. It’s a disgrace that they spent millions of dollars and years, instead of prosecuting actual murderous thugs on the streets of New York, they go after their political enemies,” Don Jr, who serves as Trump Organisation executive vice president told Fox News on Thursday night.

“After…three million documents, countless witnesses and hours of grand jury testimony, outside forensic auditors, this is what they come up with: they’re going to charge a guy who’s 75 years old on crimes of avoiding paying taxes on a fringe benefit,” he added.

Referencing the suspected $1.7 million in untaxed income referenced by prosecutors, the Trump Jr. calculated that it amounts to $136,000 over 16 years, or roughly $10,000 a year.

“Half of that, because my father’s a good guy, he paid for this guy’s grandchildren’s education. Our tax experts say that’s not even taxable. You can pay for someone’s education that way. So you cut it down, it comes out to…closer to five grand a year if you take out the education. And that’s what they’ve got,” he insisted.

The business mogul’s son went on to accuse prosecutors of hypocrisy, suggesting that the people they were “playing to – the rich, liberal New Yorkers,” were “in the car, probably their corporate car, going out to their homes in the Hamptons right now, so they don’t see it and realise how much of an embarrassment it is.”

Eric Trump, the third of the business mogul's five children, who also serves as an executive vice president in the Trump Organisation, similarly blasted Thursday’s charges, telling The Daily Mail that they were an “absolute abuse of power and a political vendetta,” and suggesting that the former president's political enemies were “petrified my father will run again in 2024.”

“Any taxpayer should be infuriated by this political witch hunt, especially as young girls are getting shot in the middle of Times Square as people are fleeing New York state in record numbers,” Eric added, referring to the May incident in which two women and a four-year-old girl were wounded in a shooting on the iconic intersection.

“These people are cruel, and this will expose them for who they truly are,” Eric Trump suggested.

Don Jr and Eric’s comments follow remarks by Trump earlier Thursday in which he accused “the Radical Left Democrats” of continuing their “political witch hunt” against him.

© REUTERS / SHANNON STAPLETON
Trump After Weisselberg Indictment: 'Political Witch Hunt by Radical Left Democrats Dividing Our Country Like Never Before'
Trump has long accused his political opponents of using a variety of methods, from efforts to impeach him and long-running allegations of "collusion with Russia" to other tools to try to bar him from politics ever since his unexpected victory in the 2016 presidential race.

Trump himself was not named in Thursday’s indictments, which included 10 counts by the Manhattan district attorney’s office against the Trump Organisation and its payroll corporation subsidiary, and 15 felony counts against Weisselberg over alleged “off the books” schemes to evade taxes on fringe benefits including cars, apartments and private school tuition received from the company. Investigators have also warned that their investigation is ongoing, and threatened to present new charges if further if evidence of additional suspected crimes is uncovered.

Weisselberg pleaded not guilty and his lawyers pledged that he would fight the charges in court.

In May, prosecutors announced that the Trump Organisation probe was no longer simply a civil matter after Manhattan District Attorney Cyrus Vance successfully subpoenaed eight years-worth of Trump’s personal and business tax returns in February after a year-and-a-half long legal battle that ended up at the Supreme Court.