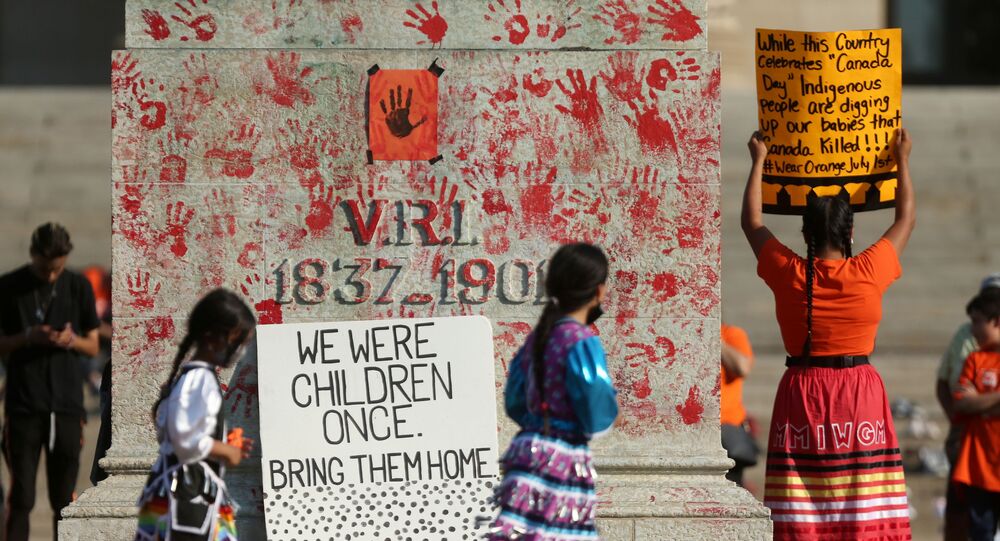 In recent weeks, Canadian First Nations (indigenous) communities have discovered hundreds of unmarked graves at sites of former residential schools, where native children were forcibly sent to be assimilated into European Canadian society. The more recent find fell on the eve of the nation’s founding holiday - Canada Day.

National celebrations of Canada Day on 1 July have been marred by protests of indigenous people, fuelled by the recent growing tally of unmarked graves found near former residential schools.

As Every Child Matters crowds gathered on Canada Day to protest the grim legacy of Canada's residential schools system, an originally peaceful gathering at the Manitoba Legislature grounds in central Winnipeg spiralled into a tense standoff with police. A crowd of protesters, many wearing orange shirts in memory of indigenous children sent to residential schools, surrounded a prominent statue of Queen Victoria on the grounds, first unveiled in 1904.

Some people in the throng wrapped ropes around the statue and pulled it off its base, toppling it on Thursday at around 4 p.m. CT. Covered in red painted handprints, the vandalised statue was left with a sign near its pedestal saying:

"We were children once. Bring them home."

A Canadian flag written over with the words "we were children" in black marker was also left at the scene.

Another monument – a smaller statue of Queen Elizabeth II - was also brought down. It was left lying on the east side of the grounds, wrapped in yellow rope.

© REUTERS / SHANNON VANRAES
A defaced statue of Queen Elizabeth II lies after being toppled during a rally, following the discovery of the remains of hundreds of children at former indigenous residential schools, outside the provincial legislature on Canada Day in Winnipeg, Manitoba, Canada July 1, 2021.

A man was also arrested by police, who were forced to use a stun gun on him, as the crowd lobbed objects at law enforcement and hurled profanities their way. The circumstances of the arrest are still unclear.

Queen Elizabeth statue has also been torn down at the #Manitoba legislature in #Winnipeg. (Located on the east side.) @CBCNews @CBCManitoba #cbcmb #canadaday pic.twitter.com/CqDWDhGrPb

Across the nation, Canada Day –the nation's founding holiday marking when three British colonies were joined to create the Dominion of Canada in 1867 – witnessed thousands flood the streets to honour the over 1,000 victims of the residential school system that have been discovered so far.

With the grim discoveries made on the eve of the holiday, there had been calls to cancel it. Over recent weeks, Canadian First Nations communities have uncovered hundreds of unmarked graves at sites of former residential schools, where indigenous children were forcibly sent for assimilation into "European cultural practices".

© REUTERS / FSIN
A crew performs a ground-penetrating radar search of a field, where the Cowessess First Nation said they had found 751 unmarked graves, near the former Marieval Indian Residential School in Grayson, Saskatchewan, Canada June 18, 2021.

The remains of 182 people were found on Wednesday near the grounds of former St. Eugene’s Mission School in Cranbrook, British Columbia by the Lower Kootenay Band. St Eugene's was operated by the Catholic Church from 1912 until the early 1970s and was one of more than 130 compulsory boarding schools funded by the Canadian government and run by religious authorities.

“You can never fully prepare for something like this," said Chief Jason Louie of the Lower Kootenay Band, a member of the Ktunaxa Nation.

The recent discovery adds to a rising tally of similarly unmarked grave sites across Canada.

In May, the remains of 215 indigenous children were found in unmarked graves in Kamloops, British Columbia. In another gruesome find, leaders for the Cowessess First Nation said the remains of 751 bodies, most of them children, were discovered at the former site of another school in Saskatchewan.

Canadian PM Justin Trudeau and members of his government promised a thorough investigation. The Prime Minister said the discoveries "have forced us to reflect on the historic and ongoing injustices that indigenous peoples face".

According to Canada's 2015 Truth and Reconciliation Commission report, from the 1840s to the 1990s up to 150,000 children were forcibly taken from indigenous families in Canada and sent to educational facilities around the nation.

The process has been equated to "cultural genocide".

According to the report, around 3,200 died in the schools, with the greatest number of deaths taking place before 1940. Schools also had high rates of tuberculosis and other health incidences in the late 19th and early 20th centuries.