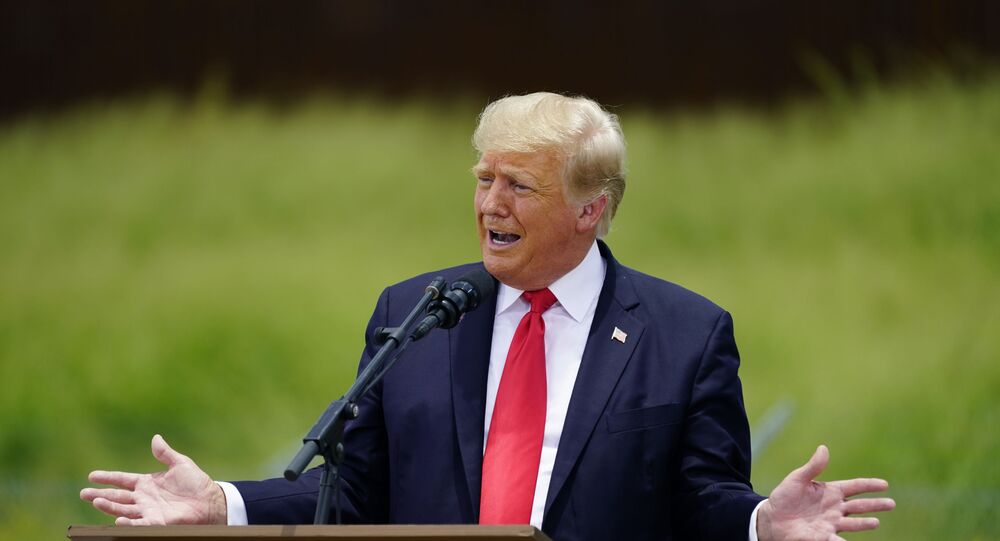 The Trump-Abbott tour to the southern border may pave the way for a GOP win in the 2022 midterms, American observers say, stressing that the border crisis and influx of migrants are likely to become hot button topics in the upcoming elections.

Trump blasted Joe Biden and Kamala Harris' "incompetence" over ignoring the unfolding crisis at the US southern frontier: “I mean the real question is do they really want open borders or are they incompetent?” the ex-president asked.

In May 2021, the US Customs and Border Protection (CBP) encountered 180,034 persons attempting entry along the southwest border which represents a 674 percent increase compared to May 2020. Law enforcement agencies also report "significant uptick" in meth, fentanyl and other illicit drugs coming from Mexico amid the simmering border crisis. Nationwide, drug seizures were up 18 percent in May from April 2021, according to CBP.

"The current immigration policies are failing miserably and any American who cares about the safety and security of the country can see the negative impact to families of all walks of life, not just at the border, but throughout the country," says Derek Maltz, a national security public safety executive and former agent from the Drug Enforcement Administration (DEA). "There are illegal migrants from 160 countries entering the US and establishing themselves in cities all over as the violent crime increases and the fatal overdoses boom. The quality of life for all taxpaying citizens has been negatively impacted."

Over 92,000 Americans died from drug overdose in just 12 months last year and these figures may go up, Maltz warns. He highlights that the overwhelming amount of the drugs causing the overdoses "are coming across the porous border" bemoaning the fact that law enforcement agents have been recently forced to shift their focus from border security to migrant care.

"With the escalating deaths caused by the poisonous fentanyl around America, the massive humanitarian crisis building as a result of the open border policies and the failed immigration strategy, the GOP base will be motivated to rally behind the former president in a big way," Maltz believes.

GOP Could Gain Tremendous Support in 2022

The Texan governor and the US former president have demonstrated that "they care way more about public safety and national security than any self-serving political agenda," according to the security expert, who praises Trump for kicking off a tour at the southern frontier and condemns DC politicians for sitting in "their safe bunkers in Washington."

The GOP could gain "tremendous support from independents and even traditional democrats who value the importance of the safety and security of the country," Maltz believes.

"This event is sure to energise the GOP base, but more importantly, it will draw more attention to the disaster that has been unfolding there since Biden dismantled the Trump border security policies," echoes Jessica M Vaughan, director of policy studies at the Center for Immigration Studies based in Washington, DC.

According to her, the border issue will become critical in defining the differences between candidates in the 2022 elections. Even if Biden manages to turn the crisis around, the damage to the incumbent president's brand is done, Vaughan believes. Meanwhile, the damage to American communities will be ongoing due to the border failure and "other harmful policies like the suspension of deportations, lenient asylum rules, more refugees and guest workers, and demands for a mass amnesty," she stresses.

In contrast, Vice President Kamala Harris' recent border trip obviously failed to ease simmering tensions over the migrant influx, according to the observers.

"It would have been nice to see VP Harris on the front lines at a priority area like the Rio Grande Valley instead of walking around an air conditioned government facility in El Paso for a photo op," Maltz says, lamenting the fact that it took 90 days and substantial political pressure to get the veep to Texas.

Harris' visit to El Paso, and her decision not to visit the part of the border where the situation is most acute, confirms that she is not interested in solving the crisis, argues Vaughan.

The vice president came under heavy criticism over her choice of El Paso, with Democratic and Republican observers unanimously calling Harris' tour a "politically safe trip". Kamala Harris tried to defend both the timing of her visit and the choice of El Paso, insisting that she announced her plans in March and that she picked the city because "it is here in El Paso that the previous administration’s child separation policy was unveiled". However, the fact that she failed to visit the government detention centre for unaccompanied migrant children at Fort Bliss (a US Army Base) while in El Paso has triggered further criticism.

"Sadly her choice of location in Texas demonstrates how this administration has failed to tackle the crisis head on," Maltz believes.

Meanwhile Gov. Abbott, who is seeking re-election in 2022, has focused on border security as his top issue this year, declaring a state of disaster in dozens of Texas counties over an increase of apprehensions at the country’s southern border, according to the Texas Tribune. The declaration has allowed the governor to tap $250 million of state funds as a "down payment" in order to build its own border wall. "Texas will build a border wall in our state to help secure our border," Abbott announced in mid-June.

Trump, who has praised Abbott's border initiative, continues to galvanise the GOP base ahead of the 2022 midterms. During his recent rally in Ohio, the former president turned the spotlight upon the apparent blunders of the present administration and most notably Joe Biden's controversial migrant policies.

Democrats rushed to dismiss Trump-Abbott's trip as "political theatre" with Rep. Vicente Gonzalez claiming Abbott's decision to invite the former president to the region is "nothing short of a slap in the face to South Texans". At the same time, Trump received high praise from law enforcement and former Trump administration immigration officials, as well as Lt. Gov. Dan Patrick and Attorney General Ken Paxton, Texas Tribune underscored.