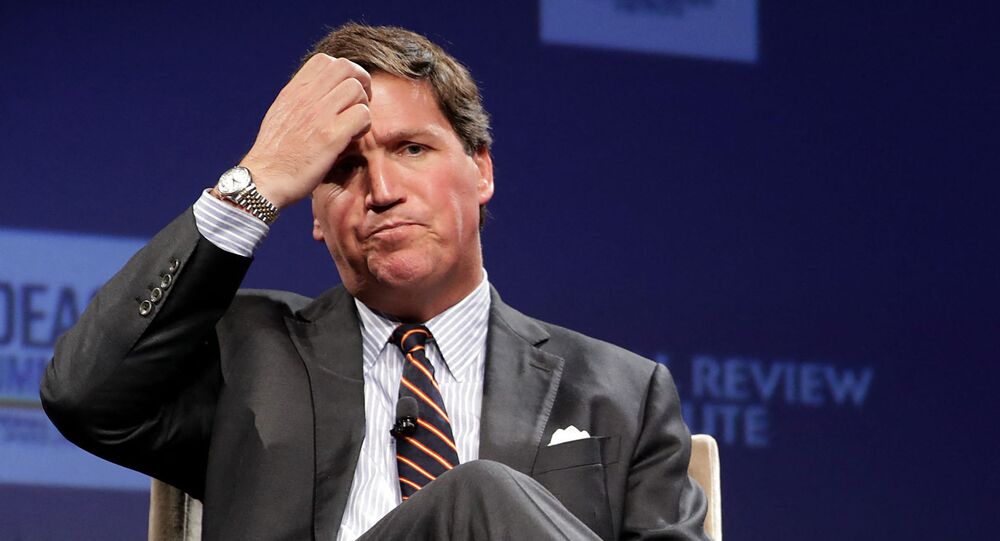 The Fox News host has gotten into a very public battle with the US intelligence community in recent weeks, accusing the FBI of helping to organize and coordinate the 6 January Capitol unrest which culminated in President Donald Trump being expunged from the media landscape and saw a fresh attempt by Democrats to permanently bar him from politics.

Tucker Carlson has doubled down on his recent claims that the Biden administration had enlisted the National Security Agency to spy on his show’s electronic communications, and has joined Republican lawmakers in pushing for a congressional probe into the matter.

“Nobody wants to go on TV and say ‘the government is spying on me’. You sound like a lunatic. Except when it’s true, and of course it is true,” Carlson said in a segment on his Wednesday night show.

“What we need is an investigation into what exactly is going on. We have the largest bureaucracy in the history of mankind – there’s never been a human organization larger than the American federal government. So we need to know what the important parts of it, the parts with a lot of power, our doing in our name,” the host added.

“It’s not just this show. They are spying on a lot of people and they should stop because it’s illegal,” Carlson stressed. “Yesterday, we had a long conversation with the National Security Agency. We got a statement out of them. They effectively conceded – ‘Yes, we read your emails’. They have some justification for it. But it’s not justified. It never is except in cases where national security is threatened. Nothing we did would ever threaten national security, period.”

In his broadcast Monday night, Tucker alleged, citing an unnamed whistleblower source, that the NSA has been monitoring his show’s electronic communications and was planning on leaking them to try to get his show off the air. Tucker said his source had provided him with details from internal communications on a story the show was working on, and that there was “no other possible source of that information” except from illegal espionage by authorities.

© REUTERS / JONATHAN DRAKE
'Totally Believable': Trump Weighs In on Tucker Carlson's Claim Of Being Spied on by Biden Admin
The host’s comments in his Wednesday broadcast came after announcements by top House Republican Kevin McCarthy and Florida congressman Matt Gaetz earlier in the day that they would support a congressional probe into the NSA over Carlson’s allegations. McCarthy told reporters that he had asked ranking Republican House Intelligence Committee member Devin Nunes to “find answers” in relation to the NSA and its alleged targeting of Tucker.

The NSA put out a tweet on Wednesday saying that the claims made by Tucker were “untrue,” and that Carlson “has never been an intelligence target of the Agency.” The agency went on to say that it is not allowed to target US citizens without a court order, apart from some “limited exceptions (e.g. an emergency).”

Carlson has become a thorn in the side of both the neoliberal left and the George W Bush-style neoconservative right in recent years, with his unconventional defence of whistleblowers and journalists such as Julian Assange, and opposition to US involvement in endless wars oversees earning him an audience not limited to the American right. Donald Trump was reportedly a regular viewer of Carlson’s show during his presidency, and it’s been reported that Tucker may have convinced him not to carry out military strikes against Iran after the June 2019 shoot down of a US surveillance drone by an Iranian air defence missile.

Carlson’s show remains the number one US cable news show, averaging 2.81 million nightly viewers, and leading the 25-54 demographic. His influence, and his tendency to report controversial stories, ranging from vaccine safety to alleged election fraud, to the bombshell allegations earlier this month that the FBI may have helped to plot and organize the 6 January riots at the Capitol, have earned him many enemies in the US political mainstream.