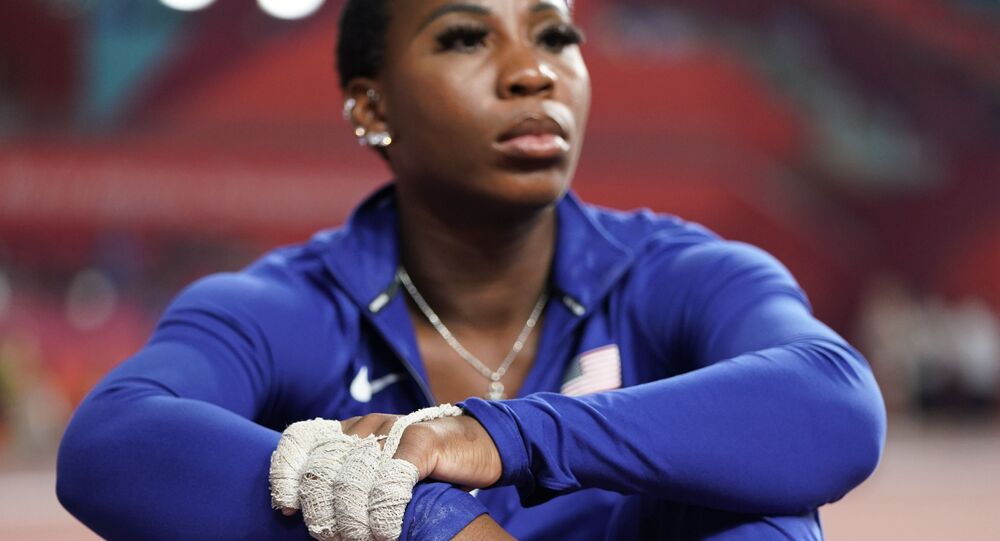 Olympian athlete Gwen Berry made some clamour over the weekend after she turned away from the American flag during the national anthem.

A photo of hammer thrower Gwen Berry holding an American flag has gone viral on Twitter following the scandal around the athlete’s decision to protest the national anthem during the US track and field Olympic Trials awards ceremony on 26 June.

Berry, 32, won bronze in the competition behind winner DeAnna Price and runner-up Brooke Andersen, effectively paving her way to the Tokyo Olympic Games next month. But while the gold and sliver medalists paid their respects to the American flag during the performance of "The Star-Spangled Banner" with their hands placed over the hearts, Berry turned away from the 13 stripes. She then covered her head with a shirt saying “Activist Athlete."

Berry later clarified that she doesn't “hate the country” but is “pissed” at the anthem for its reference to slavery.

"If you know your history, you know the full song of the national anthem, the third paragraph speaks to slaves in America, our blood being slain...all over the floor. It's disrespectful and it does not speak for Black Americans. It's obvious. There's no question,” she told the Black News Channel.

However, an old photo showing her joyously embracing the US flag ahead of the 2016 Rio Olympics is now making the rounds on social media, with critics pointing out that the banner apparently hasn't always offended the athlete.

The photo was reportedly posted on the Olympian’s personal website on 12 June 2015.

US Representative from Texas Dan Crenshaw called for Berry to be removed from the US Olympic Team over her silent protest, while many politicians and TV hosts have denounced her for insulting the country’s symbol and attempting to steal the limelight, despite only coming third in the hammer throw.

Doesn't look soo ashamed of America here to me...
Hmm..
Hmmmmmm...
I wonder who did this to her

Doing it for the attention

We need to cancel her now and recognize the real winners.