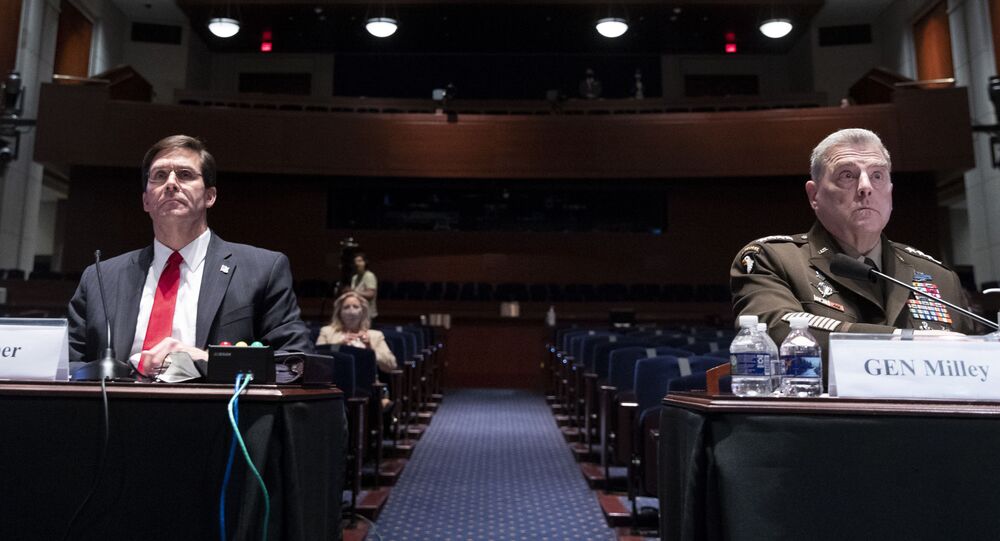 The Republican president had a falling out with much of the Pentagon’s top brass in the aftermath of the 2020 election, with the dispute reportedly centered around officials’ resistance to pulling troops out of Iraq and Afghanistan. He fired Mark Esper several days after the election and replaced him with someone willing to accelerate withdrawals.

Former Pentagon chief Mark Esper has stepped out in defence of his colleague, Joint Chiefs of Staff chairman Mark Milley, following former president Donald Trump’s tirade accusing the general of being afraid of “upsetting the woke mob” and demanding his resignation.

“Personal attacks on General Mark Milley and calls for him to resign are completely unwarranted. He and I worked together for 3+ years to advance America’s security and strengthen our armed forces. He is an officer and person of impeccable integrity and professionalism,” Esper tweeted.

Characterizing Milley as a “decorated veteran” with a 40+ year service record, Esper stressed that the general’s “patriotism and commitment to the Constitution are without question,” and suggested that “attempts to denigrate him and politicise our military our wrong.”

Esper’s comments follow remarks by Trump attacking Milley and calling on him to quit amid the latter’s attempts to distance himself from the former president and his alleged efforts to “ingratiate himself” with President Joe Biden and his woke military reforms.

“Mark Milley’s greatest fear is upsetting the woke mob. When Black Lives Matters rioters were threatening to destroy Washington, DC, he practically begged me not to send the military to stop the riots,” Trump wrote in a statement released Wednesday. “Milley later issued an embarrassing and groveling apology for walking at my side to St. John’s Church, which far-left rioters almost burned to the ground the day before,” Trump added.

“Instead of denouncing the rioters, he denounced himself – a humiliation for our Military,” Trump complained, calling Milley a “fool” for supporting allegations from last year that police had cleared the park near the church so that Trump and other officials could do a photo op. These claims have since been disputed.

Commenting on the recent reports that he and Milley ‘blew up at one another’ on how to handle the BLM protests, Trump claimed that these reports were “totally Fake News,” and dismissed Milley’s actions as “yet another desperate ploy to impress the Radical Left and keep his job.”

© AP Photo / Caroline Brehman
'I Said You're F***ing in Charge!': Trump, General Milley Blew Up at Each Other Over Racial Protest Response, Book Claims
Trump went on to attack Milley over his recent congressional testimony, accusing him of defending the “Critical Race Theory being shoved down the throats of our soldiers.” The former president urged Congress to “defund this racist indoctrination” as soon as possible and called on Milley to “be replaced with someone who is actually willing to defend our Military from the Leftist Radicals who hate our Country and our Flag.”

The recent back-and-forth between and his former officials comes ahead of the publication of a new book on the Trump presidency by a Wall Street Journal journalist –excerpts from which have been coming out in the media in recent days. According to the book, Trump and Milley had a heated exchange during a conversation on invoking the Insurrection Act – a federal law allowing the president to deploy military and National Guard troops to handle certain emergencies, in which Trump reportedly sought to put Milley in charge of the situation.

“I said you’re in f***ing charge!” Trump reportedly shouted at Milley in a Situation Room briefing last summer. “Well, I’m not in charge!” Milley reportedly yelled back. “You can’t f***ing talk to me like that!” Trump reportedly responded. “Goddamnit. There’s a room full of lawyers here. Will someone inform him of my legal responsibilities?” the general supposedly retorted.

© Sputnik
Trump General Rejected Calls for Military to ‘Beat the F**k Out' of Protesters, Claims New Book
Trump has dismissed the new book’s claims as “fake news” and said he and Milley never shouted at one another.

Trump nominated Milley to serve as chairman of the Joint Chiefs of Staff in late 2018, defending his candidacy despite objections by other senior Pentagon officials, including then-Secretary of Defence James Mattis. The two men later had a falling out over the handling of the BLM protests, and Milley’s support for a series of cosmetic reforms at the Pentagon relating to gay, minority and women’s rights which conservatives claim have made the US military the laughing stock of the rest of the world.