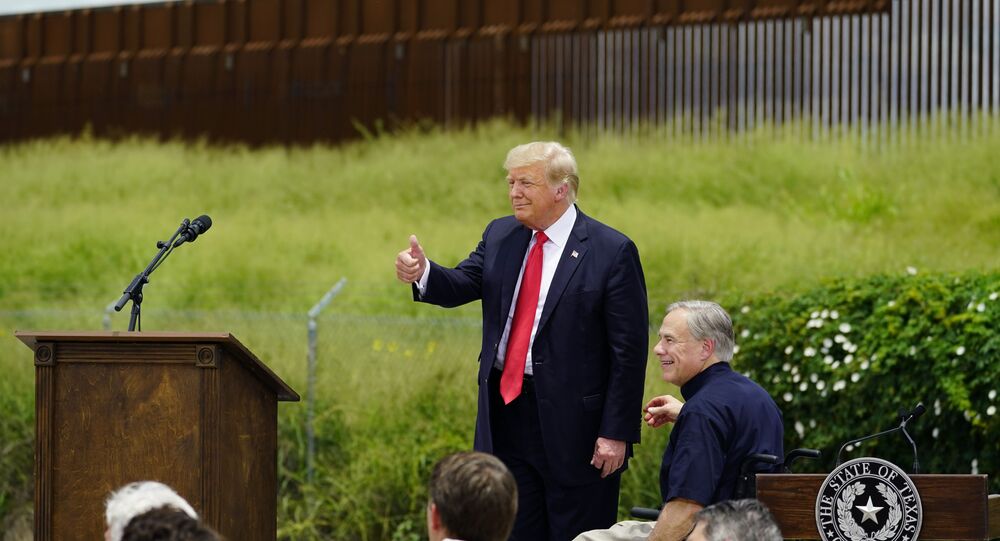 Former US President Donald Trump paid a visit to the migrant-flooded US-Mexico border on Wednesday to slam the “disgrace” that is taking place there under the Biden administration.

CNN reporter Jim Acosta, who has repeatedly clashed with Donald Trump in the past over his confrontational questions, got booed on Wednesday, after asking the former president whether he was going to “apologise for January Sixth”.

The moment was captured on camera as Trump visited McAllen, Texas on Wednesday at the invitation of Republican Governor of Texas Greg Abbott. As the ex-president wrapped up his damning remarks about the unfinished border wall, Acosta raised his voice from the crowd of reporters who were overseeing the speech from behind the tiny yellow fence:

“Will you apologise about January 6?” the reporter shouted, referring to the Capitol riot that led to Trump’s impeachment by US House of Representatives in January.

In response, Acosta got a smirk from Trump and a large “boo” from a small group of Republican lawmakers and their staff who gathered to listen to the 45th president.

Trump offered his supporters a thumbs up.

First Mo Brooks and now Trump. Jim Acosta gets booed by the audience after he asks Trump:
“Mr. Trump will you apologize about Jan 6th? “

This is how you deal with CNN. If only other Republicans paid attention.

​Acosta, the former White House chief correspondent for CNN, lost access to the West Wing press briefings after being stripped of his pass by Trump in 2018. The two clearly have not been great friends for some time already.

During his speech, the former president slammed the Biden administration for failing to finish the wall’s construction and overriding his immigration policies that have presumably sparked the border crisis.

He called the current situation a “disgrace”.

In May, US Customs and Border Protection recorded over 180,000 encounters along the US land border with Mexico, nearly an eight-fold increase from crossings documented last May.

Trump’s visit to Texas comes just several days after US Vice-President Kamala Harris finally made her way to the US-Mexico border – albeit to comparatively less busy El Paso – over three months after she was appointed by Biden to tackle illegal migration to the country. Harris maintained that she was not tasked with overseeing the border but rather addressing the “root causes” of migration. But after the vice president finally paid a visit to the border, she still got a lot of condemnation from Republican and Democratic critics alike - Harris got slammed for avoiding more busy areas, such as the Rio Grande Valley, where the majority of illegal crossings have been taking place in the previous months.