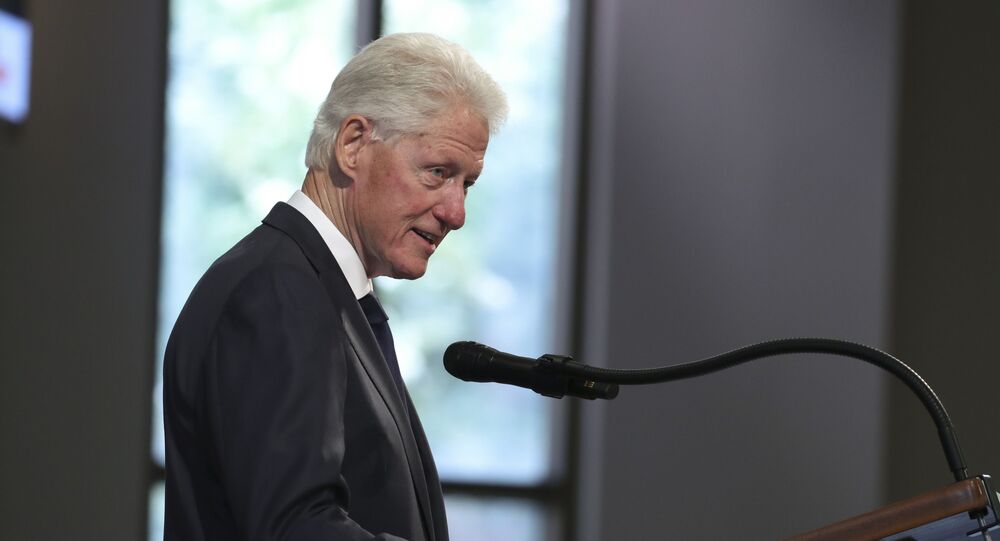 Earlier, comedian Bill Cosby thanked supporters and fans as he walked free after the Supreme Court of Pennsylvania overturned the 2018 sexual assault conviction against the entertainer, who was in the midst of serving more than two years of a prison sentence.

Disgraced comedian Bill Cosby was confused with ex-President Bill Clinton in an on-air misidentification blunder by a BBC reporter. The cringe-worthy incident occurred as journalist Michelle Fleury was reporting on the entertainer's shocking prison release.

News anchor Huw Edwards introduced Fleurry, live from Philadelphia, to give the latest update on the decision of the Supreme Court of Pennsylvania to overturn the sexual assault conviction against the famed US comedian and actor Bill Cosby.

However, in her opening sentence the reporter typically known for covering business and economics managed to mistake the comedian with the former POTUS Bill Clinton.

“Huw, for the last two years this has been where Bill Clinton has called home,” said the reporter for the BBC, pointing to the State Correctional Institution behind her.

She continued that now the released entertainer would “sleep in his own bed after the bombshell decision by Pennsylvania’s Supreme Court to overturn his conviction for sexual assault on the grounds that his 5th Amendment right - that is the right against self-incrimination - were violated”.

As the camera cut back to the BBC News presenter Huw Edwards, he apologised to viewers for the gaffe.

“Just to clarify, what was said there in Michelle’s introduction to the story, when she mistakenly said Bill Clinton instead of Bill Cosby we apologise for the mistake. The story is of course is about Bill Cosby the entertainer,” he said.

Netizens were swift to point out, tongue-in-cheek, that the reporter had made an “honest mistake”, and that Cosby and Clinton - were “crime relatives”, in their opinion.

Clinton, the former president of the United States, has been linked to several sex scandals, most notably with White House intern Monica Lewinsky.

They did the same things so it makes sense

It happens they treat women the same no respect

right next to each other in the epstien guest book, easy mistake to make

Too much #MeToo confusion of BILLS

🤣 Let’s be honest though, purely based on allegations of sexual misconduct, it’s easy to understand how she could confuse the two.

Freudian slip if there ever was one

This is the best thing I’ve seen all week! @jimmy_dore @miserablelib 😂🤣

Bill Cosby, 83, was allowed to return home after serving just two years of his 10-year sentence for sexual assault.

The high court's ruling on the release came down to a legal technicality. It was determined that the comedian's right to due process had been violated, as a 2005 agreement with then-Montgomery County District Attorney Bruce Castor prevented the longtime star of the TV sitcom "The Cosby Show" (1984-1992) from being charged in connection with the sexual assault allegations.

In one of the most high-profile convictions dating to the 'Me Too' movement, Cosby's case had involved numerous women alleging that he had drugged and raped them.

As for Bill Clinton, amid a flurry of accusations of sexual misconduct, which he has denied, the former US president admitted extramarital affairs with Gennifer Flowers and Monica Lewinsky.

In 1998, the “philandering” then-President Clinton was impeached after it emerged he had embarked upon an affair in November 1995 with Lewinsky, his 21-year old unpaid intern.

Clinton was charged with perjury and obstruction of justice, yet was acquitted after a 21-day Senate trial.
Furthermore, Clinton has been seen in several photos with the late convicted paedophile Jeffrey Epstein over the years. Clinton, who served as the 42nd POTUS from 1993 to 2001, has always furiously denied allegations of any form of inappropriate behaviour.