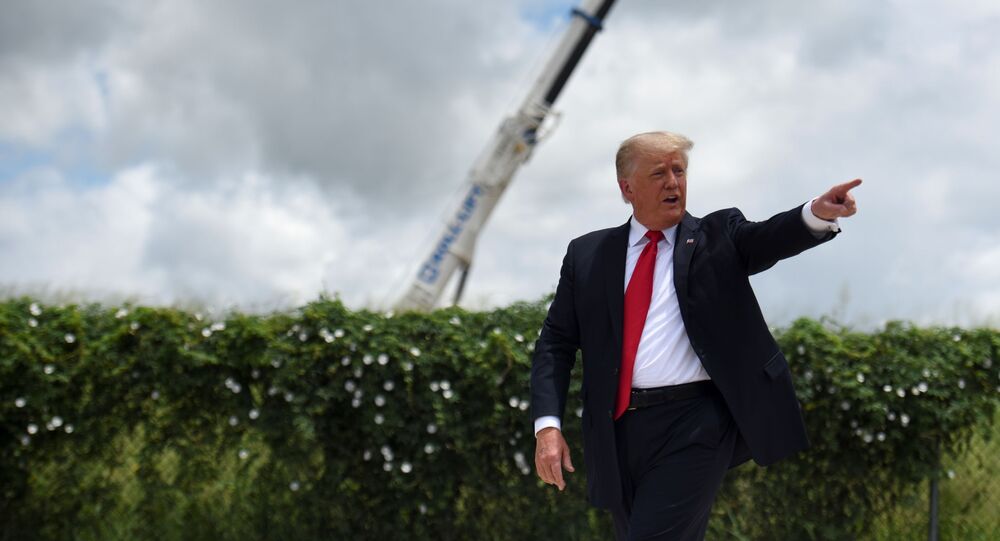 Ex-US President Donald Trump has lashed out at his successor, incumbent POTUS Joe Biden, for a dramatic surge in illegal migrants at the country's southern border.

"There has never been a border so secure as the southern border that we had, and now it’s opened up," Trump said as he visited Texas on Wednesday, adding "now we have an open, really dangerous, border. More dangerous than it’s ever been in the history of our country, and we better go back fast."

The former US president joined Republican Texas Governor Greg Abbott on a Wednesday tour of portions of the US-Mexico border to call attention to the immigration crisis in the region.

Abbott has vowed to finish construction of the wall in Texas in order to stem the flow of illegal migrants. He also pledged to ramp up the presence of state police at the border, as well as arrest and jail people caught illegally trespassing on private property, as he said that "securing the border is not just important to Texas - it is vital to America."

"The people of Texas have been pleading for us to be able to step up and help restore safety and security in their lives and this is exactly why Texas is stepping up and doing a job that is truly the federal government’s job – a job that you did but a job that the Biden administration is completely failing us on," Abbott said, describing Trump as "a great friend to Texas" who "stepped up and he secured our border and kept Texas and America safe".

At his first post-presidency rally in Ohio on Saturday, Trump said that Biden had "dismantled America's border defences and incited a flood of illegal migrants like this country has never seen."

On his first day at the White House, Biden issued a spate of executive orders to scrap immigration policies implemented by his predecessor, who followed through on his 2016 campaign promise to build a "big, beautiful" wall at the Mexico border. The Trump administration, which made border security a top priority, reportedly constructed an estimated 400 miles of the large steel wall structure, despite long court battles and consistent opposition from Democrats in Congress. In 2019, the then-president declared a state of emergency in order to divert federal funds heading to the military to pay for the construction of the border wall.

Last week, US Vice President Kamala Harris, who was tasked by Biden to lead diplomatic efforts to stem the flow of migrants arriving on the southern border, finally made a trip to the Texas border town of El Paso, after facing much backlash for not visiting the region sooner.

The vice president faced an additional backlash for not visiting the Rio Grande Valley region in south Texas, where hundreds of thousands of asylum-seeking migrants from Guatemala, Honduras, El Salvador, and Mexico have been attempting to pour into the United States.

US Customs and Border Protection (CBP) data revealed earlier this month that the number of asylum-seeking migrants apprehended along the southern border with Mexico in May set another record, reaching a new 21-year monthly high of 180,034. Over 929,868 migrants have been apprehended for illegally crossing the US-Mexico border since October 2020, putting the Biden administration on pace to break a previous annual record of 977,509 set in 2019 during the Trump administration.