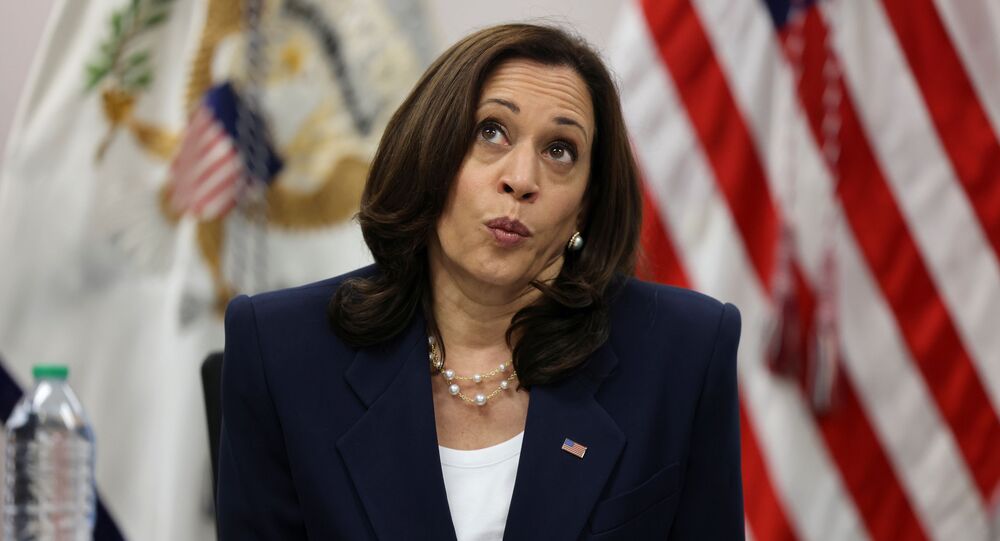 Reports suggesting that the atmosphere in the office of the US vice president leaves much to be desired emerged earlier in the week, particularly alleging that Kamala Harris' chief of staff seems to be the problem.

The office of American Vice President, Kamala Harris, does not enjoy a healthy environment and is perceived by multiple staffers as a "place where people feel treated like s**t",Politico reported on Wednesday.

In particular, Harris' staffers seem to be shaken by the VP's visit to the southern border to assess the situation with the migrant crisis - a trip that the report dubbed "the latest chaotic moment" for members of the team. The trip has only added to chaos that staffers reportedly experience in the office, where they suffer from "low morale, porous lines of communication and diminished trust among aides and senior officials".

According to Politico, a major part of the team's frustration is aimed at Harris' chief of staff - Tina Flournoy. Some 22 current and former staffers of Harris and Biden told the outlet that Flournoy has created an "insular environment" in the office, ignoring or harshly dismissing ideas and dragging out decisions.

Some, however, do not save Harris herself from ire, saying that the vice president is also responsible for the atmosphere in the office, as "it all starts from the top".

“People are thrown under the bus from the very top, there are short fuses and it’s an abusive environment,”  a person claiming to have direct knowledge of how the office is run told Politico. “It’s not a healthy environment and people often feel mistreated. It’s not a place where people feel supported but a place where people feel treated like s---.”

Concerns about how Harris' staffers are being treated were reportedly sparked among members of the president's own team.

Not everyone feels critical, however, as Symone Sanders, a senior advisor and chief spokesperson for Harris, debunked complaints and defended the vice president's chief of staff.

“We are not making rainbows and bunnies all day. What I hear is that people have hard jobs and I’m like ‘welcome to the club,’” Sanders said, blasting anonymous critics. “We have created a culture where people, if there is anything anyone would like to raise, there are avenues for them to do so. Whoever has something they would like to raise, they should raise it directly.”

Flournoy also appears to be backed by Anita Dunn, a senior adviser to the US president, who, when asked about the allegations, said that complaints about the office environment were “not anywhere near what you are describing.”

This is not the first time that Harris' chief of staff has been a target for criticism, as earlier in the week it was reported that she shut out Harris' longtime aides and friends in an attempt to restrict access to her boss. In the Politico report, unnamed friends and donors of the VP complained about Harris suddenly going "radio silent" after hiring Flournoy as her chief of staff.

“This is someone who has raised hundreds of thousands of dollars—millions, even—for your boss and you’re just blowing them off?” one of the reported Harris friends questioned, cited by Politico. “Next time Kamala wants [them] for something, it’s like, ‘Hey, I couldn’t even get a call-back from your chief of staff!’”

The unnamed people referred to also suggested that Harris is aware of the office problems.

“She [Harris] is the most perceptive person on the planet,” one person said. “She might not have first-hand knowledge, but it’s hard to imagine she doesn’t have a sense of what’s going on.”

Harris has been designated to tackle the migrant crisis on the southern US border and lead efforts on protecting Americans' voting rights.

As she deals with those tasks, Harris faces criticism, in particular she has been condemned for being reluctant to visit the border herself to assess the situation she is tasked to handle, and when she eventually arrived at the border, her visit also prompted a backlash. The VP was criticized for choosing El Paso, Texas, rather than other border areas, with observers alleging she preferred to visit an area where the Biden administration is more supported and numbers of illegal crossings are fewer.