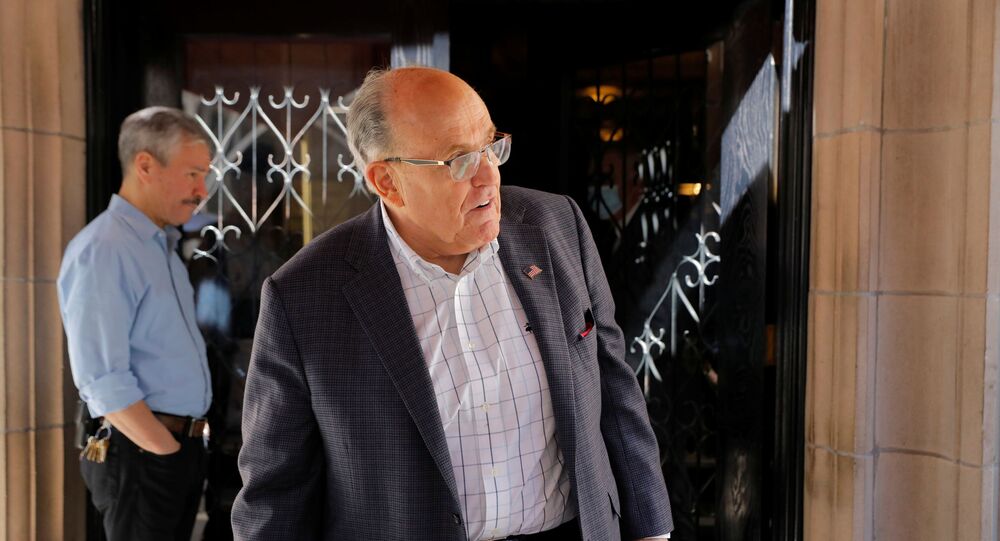 A former New York City mayor and Donald Trump's personal attorney, Rudi Giuliani is currently facing several legal challenges, among them last week's suspension of his New York license to practice law over the latter's promotion of baseless claims of voter fraud in the November 2020 US presidential election.

Rudi Giuliani has become the subject of another Department of Justice inquiry into whether he lobbied interests in Turkey, Bloomberg reported on Tuesday, citing people claiming to be familiar with the matter.

The reported inquiry, in contrast to a probe into Giuliani's activities in Ukraine, is a separate investigation that is not criminal. According to Bloomberg, the Justice Department is looking into whether Giuliani lobbied Turkish interests when he urged the Trump administration to drop money-laundering charges against gold trader Reza Zarrab in 2017, and also reportedly pushed for the deportation of exiled Muslim cleric Fethullah Gulen.

The Ukrainian case led to the Federal Bureau of Investigation seizing Giuliani’s electronic devices during April raids on his home and office, with investigators reportedly interested in his ties to a Ukrainian businessman, Dmytro Firtash.

Both matters involve allegations of lobbying foreign interests, and Giuliani has denied the accusations that he promoted the foreign interests of Turkey and Ukraine. The US government has not yet accused him of any wrongdoing in the two matters.

Giuliani's lawyer, Robert Costello, told Bloomberg that the inquiry was driven by an October 2019 Washington Post story, in which it was alleged that Giuliani actively sought Gullen's deportation from the US to Turkey.

“Giuliani never sought the cleric’s deportation, and he never represented Turkey,” Castello claimed, noting that the former New York City mayor contacted Turkey only to make attempts to release Zarrab, in exchange for Andrew Brunson, an evangelical pastor at the time held by Ankara.

Following the Ukraine probe and the seizure of his electronic devices, Giuliani saw his legal license withdrawn in New York state over "false statements" he made in regard to the November 2020 election and his baseless allegations of "voter fraud" that he, along with supporters of former US President Donald Trump, continues to believe took place.