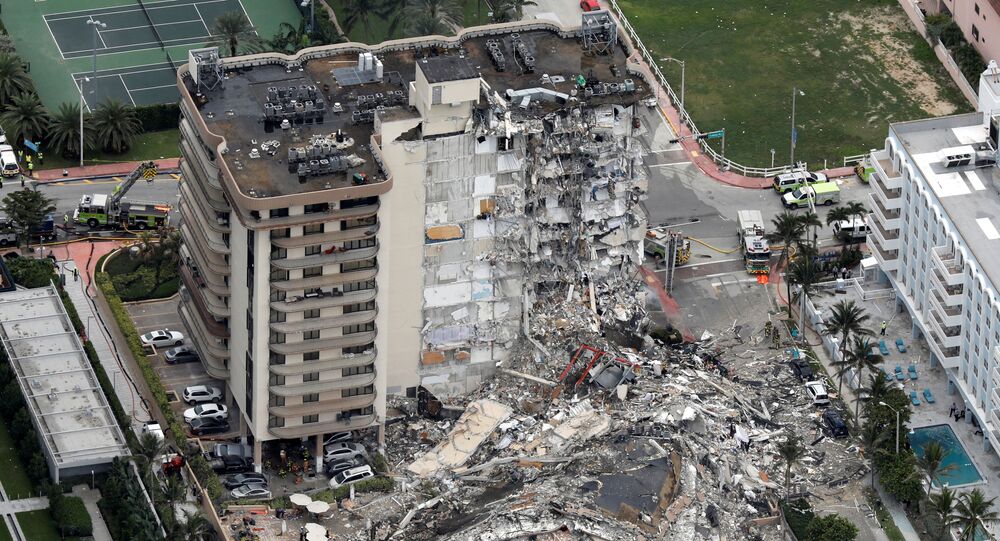 The death toll in the Miami condo collapse soared to 11 as rescue efforts went into a fifth day on 28 June.

Although there are new cracks in a sister building of the collapsed condominium complex in Surfside, Florida, experts insist that residents are safe, according to NBC Miami.

The news outlet cited structural engineer and prominent expert Allyn Kilsheimer as saying that both sister properties to the collapsed Champlain Towers South showed "no visible evidence of any major structural concerns".

Robert Lisman, a resident of Champlain Towers East, however, was not that sure after he took photos showing a large chunk of stone crumbling off a pillar in the building's garage.

According to him, the damage was not visible until after Champlain Towers South collapsed last Thursday.

"I'm afraid that there could be some issue in our building that could result in what we saw in Champlain Towers South", Lisman told the news outlet Local 10.

He spoke after Miami-Dade County Mayor Daniella Levine Cava said that residents who want to evacuate the sister building of the collapsed condo can do so with support.

"So just the building that is the sister building to the one that came down, that is the one that Surfside has authorised for voluntary evacuation. […] It's also true that the town building inspector went and did not find any immediate causes of concern", Cava said in an interview with NBC's "Meet the Press".

Surfside Mayor Gary Burkett, for his part, referred to Champlain Towers North being "basically the same building" as the collapsed condo.

© REUTERS / MARCO BELLO
Ray of Hope? Family Gets 16 Calls From Missing Grandparents' Landline After Miami Condo Collapse
"It was built about the same time, it was built by the same developer, it was probably built with the same plans, it was probably built with the same materials. Given that we cannot determine what made Champlain South fall down it's understandable that they're nervous", Burkett added, in an apparent nod to residents.

Champlain Towers South, a 40-year-old residential building located near Miami Beach, partially collapsed on Thursday night, leaving at least 11 dead, according to the latest estimates. As many as 156 tenants are still reported missing in the tragedy.