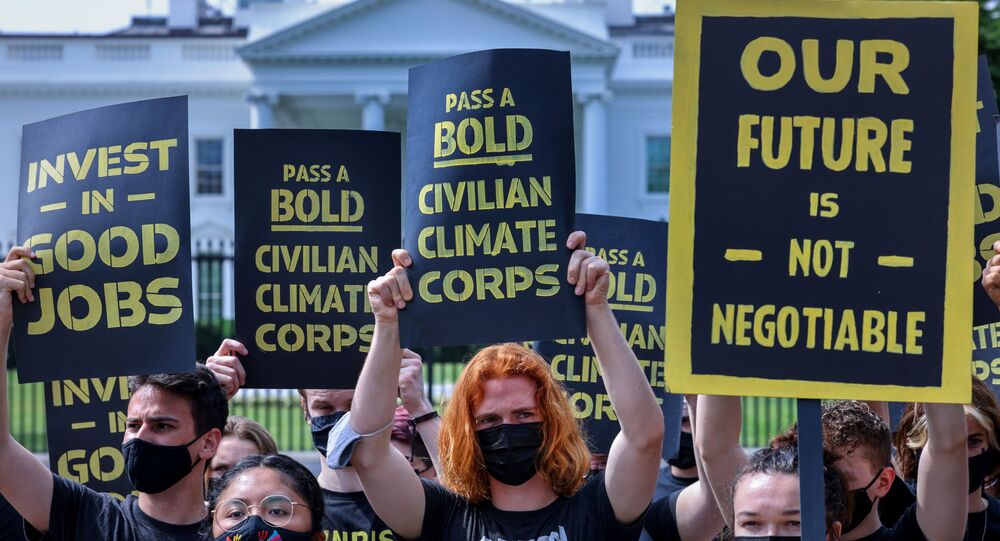 Hundreds of Sunrise Movement-affiliated climate activists descended on Washington, DC, on Monday to carry out a public protest urging US President Joe Biden and his administration to prioritize climate change within the White House's infrastructure bill.

Members of the youth-led movement marched through the DC streets, demanding the Biden administration halt negotiations with the GOP. Activists were also overheard shouting "defund MPD," a call for the reallocation of taxpayer dollars that presently fund the Metropolitan Police Department (MPD).

"People are suffering, people are dying because of our problem - that society created," Bush said, linking climate change to floodings.

"What a lot of folks here in DC don't understand is that while this may be the hottest summer of their lives, it's going to be one of the coolest summers of our lives," Ocasio-Cortez remarked on Monday, arguing that temperatures will continue to increase.

Bush, Bowman and Ocasio-Cortez have been endorsed by the youth movement.

Sunrise Movement organizer Nikayla Jefferson argued that because "the youth carried the election," Biden has a duty to "negotiate" with the youth-led organization.

Jefferson, along with Ocasio-Cortez, called for a Civilian Climate Corps - a US government-backed job program geared toward combating climate change.

"So we will sit here until you commit to the side of climate justice, commit to an American Jobs Plan written with bold ambition against the climate crisis including a Civilian Climate Corps, and pass it through reconciliation immediately — or you will not pass a bill at all," the organizer said, as reported by the New York Daily News.

As the demonstrations carried on around the White House, members of the Secret Service were seen arresting "dozens" of movement-affiliated demonstrators who were seen blocking entrances and exits Biden's residence.

Today we showed up to @JoeBiden’s doorstep with 500+ people and blockaded every entrance to the white house, demanding that he include a fully funded #CivilianClimateCorps in his infrastructure bill.

Secret Service then arrested dozens of us. pic.twitter.com/hpBSrhnhF1

While the Sunrise Movement has called for the prioritization of fighting climate change within Biden's infrastructure bill, Senate Minority Leader Mitch McConnell (R-KY) has argued that the bipartisan bill on "real infrastructure needs" is being held "hostage."

Republicans have been negotiating in bipartisan good faith to meet the real infrastructure needs of our nation. The President cannot let congressional Democrats hold a bipartisan bill hostage over a separate and partisan process. https://t.co/oN6ZY48wp3

"The President has appropriately delinked a potential bipartisan infrastructure bill from the massive, unrelated tax-and-spend plans that Democrats want to pursue on a partisan basis," McConnell said in a Monday statement, calling on the US president to "engage" Senate Majority Leader Chuck Schumer (D-NY) and House Speaker Nancy Pelosi (D-CA), "and make sure they follow [Biden's] lead."