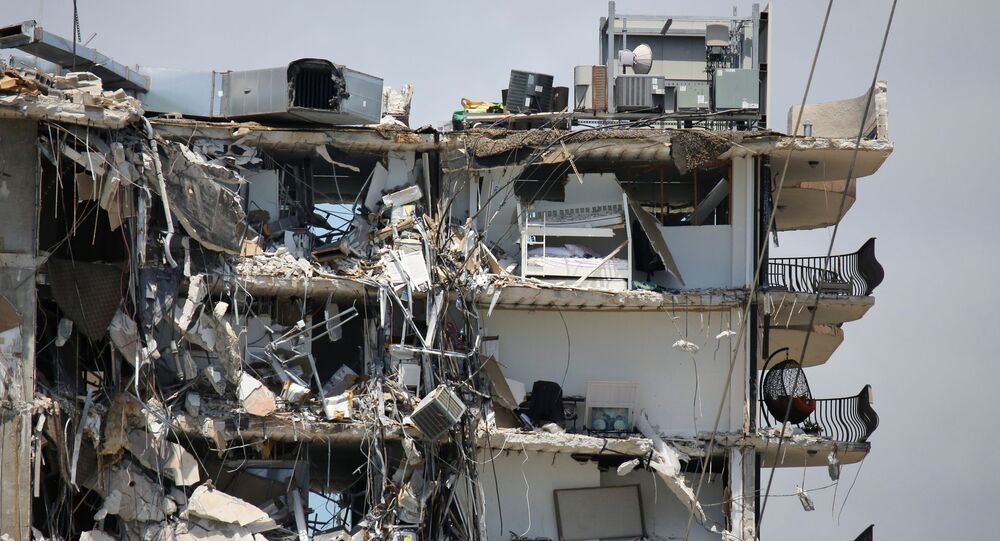 The Champlain Towers South Condo, a 12-story residential building in Surfside, Florida, collapsed overnight on June 24 as many of the residents were asleep. At present, investigators are still unsure what prompted the demolition-like collapse, although speculation has remained at an all-time high.

Authorities involved in ongoing rescue efforts in Florida announced on Monday that the number of confirmed deaths from the partial condominium collapse has risen to 11, increasing by one fatality since the previous update.

Miami-Dade County Mayor Daniella Levine Cava told reporters during a news conference that first responders had recently recovered an additional body from the site as rescue efforts have gone into the fifth day.

The mayor further stressed that the figures are "fluid," and are more than likely to change throughout the day.

“We are exploring all possible avenues, and we are going to continue and work ceaselessly to exhaust every possible option in our search,” she said. “We are going to get to the bottom of what happened here. Right now, our top priority is search and rescue and find the people.”

To date, investigators have managed to identify eight of the victims, who range between the ages of 26 and 83. It remains unclear how many individuals were occupying the building when the structure collapsed.

Rescue efforts currently involve the participation of over 300 first responders, including some from Israel and Mexico. The Army Corps of Engineers, which is often tapped for relief missions, has also been called in to assist officials.

From canine units to high-tech cameras, officials on site are tapping a variety of tools to sift through the rubble. Over the weekend, teams dug a massive trench measuring more than 125 feet long and four stories deep that will help them to better access the site.

Miami-Dade Fire Rescue Chief Alan Cominsky explained to reporters that “by creating that trench, it’s also giving us opportunities to look for different areas in regards to access points to search from."

Although investigators are still trying to understand what prompted the incident, reports have surfaced detailing past complaints regarding water issues at the building, with one consultant warning in 2018 of crumbling columns and walls in the parking garage.

In fact, one commercial pool contractor who was dispatched to check the building two days before the collapse informed the Miami Herald that they found a concerning amount of standing water in the basement-level garage, as well as a severely corroded rebar under the building's pool area, among other structural issues.

Experts have hinted that efforts to clear the site, identify remains and pinpoint the exact cause  of the collapse could take several months.

Day 5 of Rescue Operation at Collapsed Condo in Miami