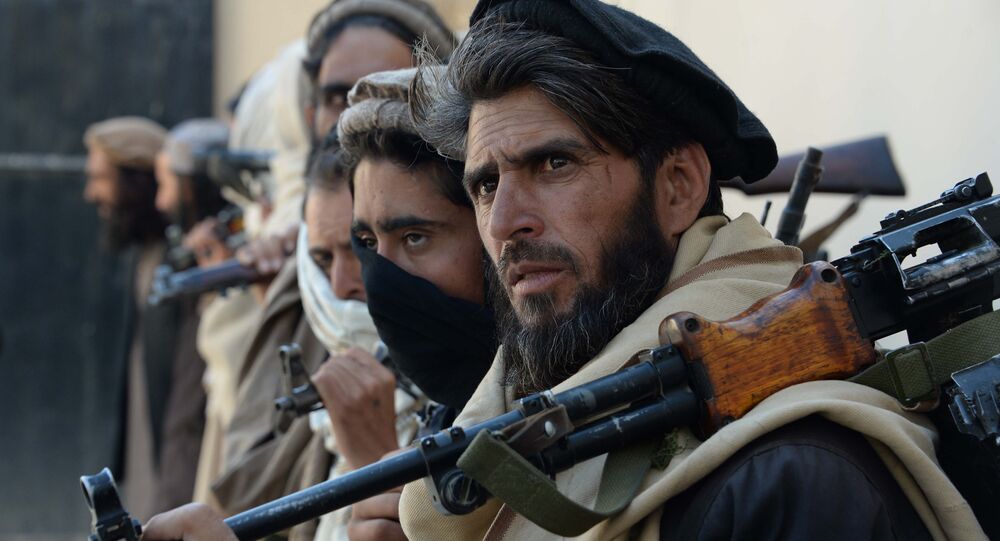 From 'Soldiers of God' to 'Terrorists': Story of Washington's Broken Promise to Afghan Mujahideen

The Taliban*, also known as the Islamic Emirate of Afghanistan (IEA), is continuing to make gains on the ground. According to some estimates, the IEA has taken from 50 to 90 districts since May 2021, with some of them being seized without a single shot fired. What's behind the Taliban's recent offensive?

UN officials and American policy-makers are expressing concerns over the possibility of the Taliban taking over the country once American troops complete their withdrawal by 11 September 2021. US Senate Minority Leader Mitch McConnell, who met with an Afghan delegation led by Ashraf Ghani and Abdullah Abdullah earlier this week, expressed hope that the White House postpones the pull-out.

"The Taliban, emboldened by our retreat, is rolling back years of progress, especially for the rights of Afghan women, on its way to taking Kabul", said McConnell.

On 24 June, the Associated Press quoted US officials as saying that roughly 650 US troops will remain in Afghanistan after the withdrawal.

While Washington is raising the alarm over the potential Taliban takeover, the US willingly exploited Afghan Islamist fighters and ideology of Jihad bil Saif ("warfare") in the past to reach its geostrategic objectives in Central Asia, says Sabtain Ahmed Dar, a Pakistani political analyst, academic, and author. In the 1970s and 1980s the US provided lethal military aid to Afghan Mujahideen ("those who wage jihad") as part of its Operation Cyclone against Soviet forces in Afghanistan.

"We know of their deep belief in God", stated then-National Security Adviser Zbigniew Brzezinski during a meeting with Afghan Mujahideen in 1979 in Pakistan. "And we are confident that their struggle will succeed. That land over there is yours, you'll go back to it one day because your fight will prevail and you'll have your homes, your Mosques back again because your cause is right and God is on your side".

Paradoxically, the very same "Afghan freedom fighters" or, as CNN called them, "soldiers of God", which were armed and funded by the CIA as an unconventional war tool to gain strategic interests in the region are today denounced as terrorists by the US, Dar remarks.

© AFP 2021
Afghan mujahideen prepare a rocket attack on the government troops in Shaga, Eastern Nangarhar province, on January 15, 1989 during the Afghan Civil War opposing the Islamic Unity of Afghanistan Mujahideen and the Democratic Republic of Afghanistan (DRA) supported by Soviet Union

"Even after the end of Afghan Jihad and consequent Geneva Accords of April 1988 that resulted in Soviet troops' withdrawal, these groups were continuously used by the United States to topple the Communist-oriented Najibullah government", the Pakistani academic notes. "This led to a vicious cycle of violence that has been unfolding since then in the country".

The civil war that erupted between different factions inside Afghanistan in the 1990s prompted the creation of a local freedom movement, the Taliban ("students"), which, according to Dar, has nothing in common with international Islamist terrorist groups such as al-Qaeda* or Daesh*.

Between 1996 and 2001, the Taliban held power over roughly three quarters of Afghanistan. However, despite Brzezinski's promise, Washington did not allow the Mujahideen to maintain the rule of Islamic law in the country by invading Afghanistan in 2001. The US launched Operation Enduring Freedom under the pretext that the Taliban allegedly hid the al-Qaeda leaders responsible for the 9/11 attacks, something that the Afghan Islamist movement vehemently denied.

© AFP 2021 / Noorullah Shirzada
US soldiers part of NATO patrol during the final day of a month long anti-Taliban operation by the Afghan National Army (ANA) in various parts of eastern Nangarhar province, at an Afghan National Army base in Khogyani district on August 30, 2015

"The Afghanistan war in reality is a war against two rival systems, where the United States with its coalition wants to forcibly install its western democratic model in a country that for hundreds of years governed themselves on the principles of Islam and Afghan tribalism", Dar says.

Since the beginning of Operation Enduring Freedom in October 2001, the Taliban had resisted the US "to a point that in 2014 the Obama administration announced a military pull-out which is considered a de facto Taliban victory over the US coalition", according to the political analyst.

"This has brought us to a framework which is today known as the 'Afghan Peace Process' whereby reconciliation through dialogue is seen as the only solution to the so-called longest US war", he notes.

The Taliban Remain Suspicious About US Plans

Meanwhile, the US administrations' flip-flopping on the Afghan peace process is adding to the ongoing controversy. While Donald Trump reached an agreement with the Taliban in Doha in February 2020, his successor, Joe Biden, reconsidered the deal and came up with his own proposal, at the same time delaying the US military pull-out from the region for several months.

"If Biden's new proposal takes effect it will likely sideline last year's Afghan peace process to pave the way for a new roadmap to establish such an order in Afghanistan that would serve US interests in the future", Dar believes. "This is why many agreed [upon] clauses of the earlier peace process didn't come into effect as the interests of the parties in the talks are not aligned. Since the US has resumed its airstrikes and following the Taliban's latest offensive reaching any such agreement seems impossible".

The Taliban fighters are expanding their control in the country seeking to take Kabul, as they remain suspicious of the Biden administration's future plans regarding the new Afghan government, according to the academic. As of 22 June, a total of 15 more provinces have fallen into the Taliban's hands since its latest surge, says Dar, citing his sources in local news.

"The latest stats by the Long War Journal observed that out of 398 districts in Afghanistan, the Taliban now control 107 while the US-backed Afghan government controls 92 and some 199 remain contested between the two", says Dar. "As per the observation on population, nearly 12 million live in government controlled areas and around 6 million in areas under the Taliban's control while some 15 million [are] in the contested areas".

Neither the Afghan government nor the Taliban appears capable of fully retaking each other's areas of influence which leaves the talks as the only possible solution, according to the academic.

Afghanistan's closest neighbour, Pakistan, who played an important role in brokering the US-Taliban deal in Doha, appears unwilling to bear responsibility for the Biden administration's blunders. Pakistani Foreign Minister Shah Mahmood Qureshi stated on 14 June that Pakistan had delivered what it could for the peace process in Afghanistan and that if the peace deal collapses Islamabad should not be blamed.

At the same time, Islamabad is highly interested in peace and stability in Afghanistan, since a destabilised Afghanistan poses a threat to Pakistan's security both in terms of defence and economically, according to Dar. The academic further explains that Qureshi's criticism of those who want to hold the Taliban accountable for the whole mess in the region stems from Islamabad seeing the Islamist movement as "fighters against foreign occupation".

​"Qureshi is also concerned about the US policy of putting pressure on Pakistan after every US coalition failure inside Afghanistan", Dar emphasises. "This policy may now come to an end as the PM of Pakistan Imran Khan (PMIK) has categorically denounced the US request to have military bases in Pakistan to launch counter-terrorist military operations in Afghanistan. This new policy by PM Imran Khan came as a bolt from the blue for the US and raises questions about the efficacy of Pak-US bilateral relations".

The US and regional states should "stop exploiting Afghanistan on the basis of geopolitical ends and accept the reality of Afghans", according to the Pakistani academic, who believes that America's complete withdrawal from the region could pave the way for peace in Afghanistan. On the contrary, if Washington continues to beef up its military presence in the region, the conflict may continue and trigger a civil war more brutal than the Afghan civil war of the 1990s, Dar warns.

*The Taliban, Daesh, and al-Qaeda are designated as terrorist groups in Russia and other countries.