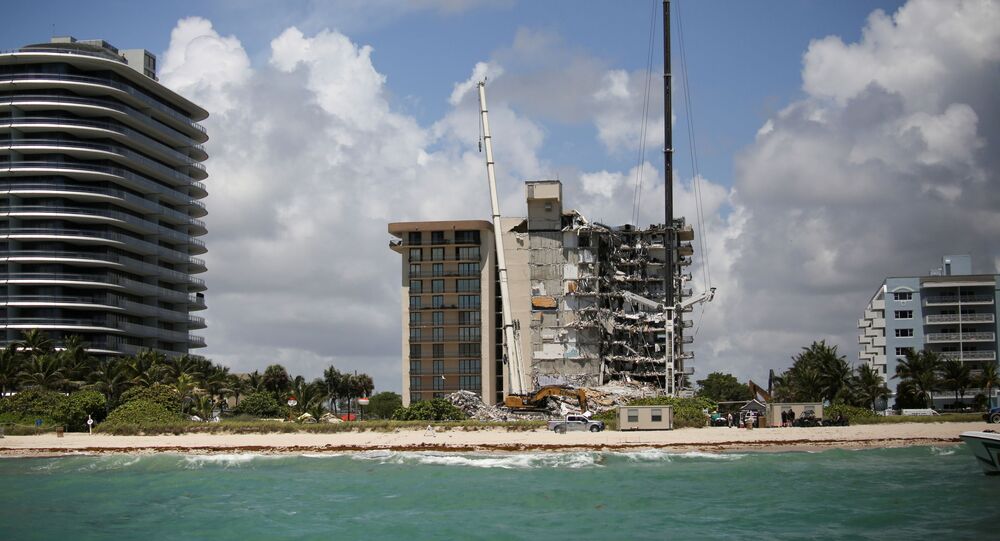 According to Miami-Dade County records, the 12-storey Champlain Towers South condo, which partially collapsed on early Thursday, was constructed in 1981 alongside twin towers named East and North, and whose construction ended by 1986.

Structural engineers from the National Institute of Standards and Technology (NIST) have arrived at Champlain Towers North in Surfside, Florida, to inspect the building's garage in order to decide whether it is safe for the worried residents to stay at the beachfront condos or they should leave, The Wall Street Journal has reported.

The engineers were reportedly escorted by the Miami-Dade Police.

NIST, which is part of the US Department of Commerce, is the federal agency that investigated the collapse of New York City's twin towers after the terrorist attacks on the World Trade Centre on 11 September 2001.

Fahim Sadek, one of the NIST engineers, reportedly said they were looking for the source of the collapse and that they needed to check the basement area of the north building to get a sense of what Champlain Towers South looked like.

According to the report, many residents in Champlain Towers North and others nearby in the area, whose condo towers flank the shore, are heavily concerned, given that their twin building suddenly collapsed this week.

Mayor Daniella Levine Cava of Miami-Dade County has reportedly directed the county's Department of Regulatory and Economic Resources to conduct a 30-day audit of all residential buildings with five floors or more that are 40 years or older.

Earlier today I visited the collapsed building with Director @FEMA_Deanne. It’s heartbreaking – but watching our men and women searching the rubble without stopping reaffirmed just how lucky we are to have the best in the world on this mission. pic.twitter.com/bwmhcbu8L9

The goal of the audit will be to ensure that every building has completed the proper recertification process and that any issues that have been detected have been rectified.

In an interview on Sunday, Surfside Mayor Charles Burkett said the town was working out the details of a plan to temporarily transfer occupants of the north tower. The Federal Emergency Management Agency has promised to help.

"Buildings don't fall down in America", he said. "There was something obviously very, very wrong at this building, and we need to get to the bottom of it, but not today, not tomorrow and not for a long time, because our first priority and our only priority is to pull our residents out of that rubble".

According to local media, firefighters managed to localise the fires continuing under the rubble, but they are interfering with the search operation.

Officials insist that there is still hope of finding survivors among the ruins as firemen finally put out a major fire that had hindered rescue attempts for three days.

Mayor Cava confirmed that according to the latest information, there are 9 people dead as a result of the collapse, and one injured teenager was pulled out from the rubble alive. Some 152 people are still missing and unaccounted for.

Earlier, The New York Times reported that an engineer who inspected the collapsed building three years ago warned of the discovery of "major structural damage" to the building complex.

On Thursday, a 12-storey building partially collapsed in the city of Surfside, which is part of the Miami metropolitan area. The authorities said that about half of the 130 apartments located there were destroyed, and more than 80 rescue teams were sent to the scene of the incident.