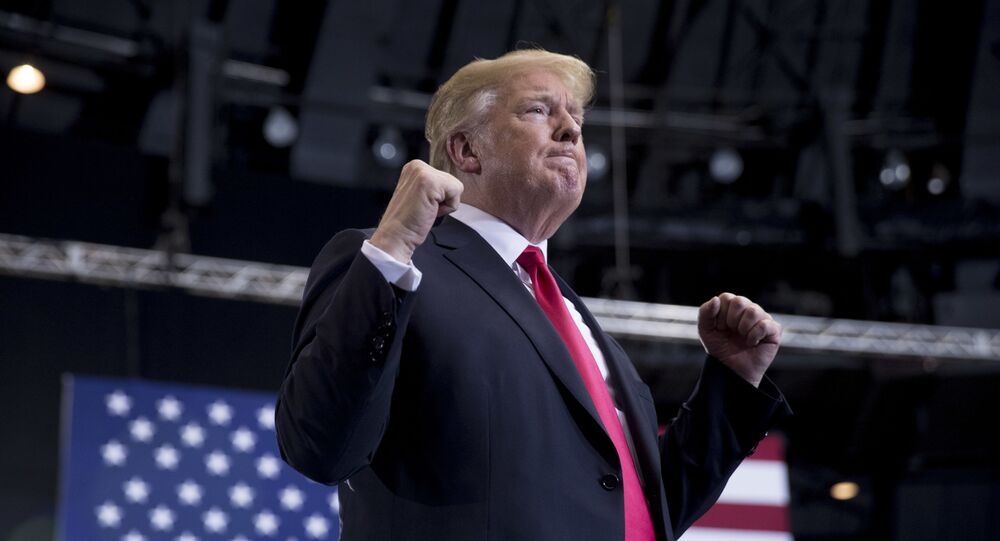 Despite being banned from all major media platforms, former US President Donald Trump remains highly popular with his supporters, the US mainstream press has admitted following his first post-presidency rally in Ohio. American observers have discussed what message the Ohio rally sends to Republican voters.

On Saturday, former President Donald Trump held a rally at the Lorain County Fairgrounds, Ohio, which brought together thousands of his supporters. A small plane flying above the crowd carried the banner: “Ohio is Trump country.”

"For Americans, the Ohio rally marked the beginning of a true potential return of Donald J Trump and the return of the power of his 'America First' platform in the United States. We’d love to see him win the presidency for a third time. Biden would’ve never won without a global pandemic and we all know it," says Judd Dunning, author of "13 1/2 Reasons Why NOT to Be a Liberal," a Newsmax Insider and Regular Commentator, and the host of the new radio show Los Angeles KABC AM790’s Unapologetic: The Judd Dunning Hour.

Donald Trump can get people to vote and be very valuable in the midterms, says Michael Shannon, a political commentator and Newsmax columnist, adding that the ex-president's endorsement "counts for a lot."

The former president urged Republican voters to deliver a "gigantic victory" for GOP lawmakers during the midterms and called for getting rid of RINOs, i.e. Republicans in name only. One of these RINOs mentioned by Trump was Anthony Gonzalez, a GOP representative from Ohio.

“[Gonzalez is] not the candidate that you want representing the Republican Party," Trump said. "Every single Republican needs to vote him out of office."

Trump is right when he lashes out at RINOs, deems Pamela Geller, an American political activist, blogger, and editor-in-chief of the Geller Report.

"If Republicans don't stop kowtowing to the hard left's agenda, and ceding them the ground in the culture war, America will be finished as a free society. The situation now is extremely grave," she notes.

According to Geller, the Democrats rigged the 2020 elections and have been moving to criminalise and silence all opposition since then under the pretext of the 6 January Capitol breach. She does not rule out that the DC incident was a trap for unaware Trump supporters.

"If [the Democrats] are not stopped now, they will make it impossible for free people to speak out and to oppose their agenda, which they will then impose upon us, to the detriment of this nation and the world at large. The future of free societies worldwide hangs in the balance," she warns, referring to increasing censorship on social media and in the mainstream press.

© REUTERS / KEVIN LAMARQUE
U.S. President Joe Biden delivers remarks on the U.S. economy as Vice President Kamala Harris stands by in the East Room at the White House in Washington, U.S., May 10, 2021

"Many of us still believe America can and will return to the right in 2022 with his [Trump's] help, (although he did float the possibility of a return, which brought a lot of excitement to many of us). America has never been about one man, yet when one man embodies our ideas so well, it’s hard to separate them, especially when Biden‘s entire platform is one based upon either hating the other or self-hate for all American so they can continue to expand power and destroy our country. [...] This is not the America I grew up in with free access to media.. Big tech, social media and mainstream media made it extremely difficult to see the rally. It was only played on a limited amount of outlets but they were packed with passionate committed Americans. We look forward even more and more as we head toward 2022 and take our country back," Dunning added.

Biden Administration is a 'Disaster'

Trump did not miss his opportunity to slam the Biden-Harris administration over their migration policies during the Ohio rally and mentioned Kamala Harris' visit to El Paso, a city in Texas located near the US-Mexican border.

Previously, the ex-president assumed that Harris decided to visit the border only because he himself had scheduled a trip to the frontier with Texan Governor Greg Abbott. The Biden administration has found itself lambasted for its migration policy by both the Right and the progressive Left.

"Biden's administration has been a disaster. He says America is back. And that is actually correct. America is back to Jimmy Carter's America in the 1970s," says Shannon in an apparent reference to soaring inflation and rising prices.

When it comes to foreign policy, the political commentator bemoaned Biden's weak performance at G7 earlier this month: "Biden looks like he's someone that just wandered into this G7 meeting."

"Biden signals a dangerous weakness that the country may be paying for in the very near future," Shannon presumes.

While touching upon the 2022 elections during the rally, Trump remained tight-lipped about the probability of throwing his hat in the ring in 2024. However, it has remained one of the most discussed topics since his November defeat, which Trump, according to his latest interview with Just the News, has never recognized.

The former president has toyed with the idea of joining the 2024 race during his recent interviews, The Epoch Times remarked on Sunday, adding that Trump promised to make up his mind following the midterms.

The Saturday rally in Ohio sends a "twofold message," according to Shannon: first, Trump has not gone away quietly and that he still wants to be a participant; second, though he might not run for president in 2024, he will instead be "kind of the ringmaster for the Republican Party, holding rallies to energise the base to turn out the vote, to endorse candidates, candidates who will continue the legacy he promised but did not deliver."

"If polarisation continues to increase, which I believe it will, and Biden flounders without any big ticket legislation (which I also believe will happen), Trump stands a chance of getting back into the game," highlights Ethan Ralph, conservative political commentator and founder of The Ralph Retort website.

Trump Calls on Republicans to Defeat ‘Radical Democrats’ in 2022 Election