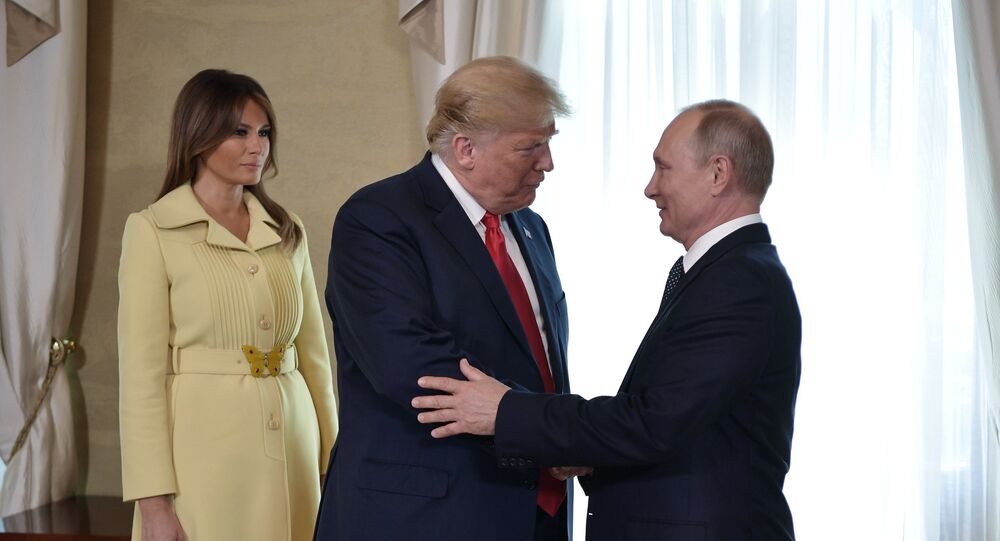 Ahead of the 16 June Putin-Biden summit in Geneva, Trump issued a statement in which he sent warm regards to the Russian president.

Donald Trump has claimed that he had good relations with Russian President Vladimir Putin despite the fact the ex-POTUS was at odds with Moscow over Russia’s Nord Stream 2 gas pipeline project.

“I stopped the pipeline, […] I sanctioned them all over the place and I had a good relationship with Putin but that’s a good thing, that’s not a bad thing”, Trump said at the Lorain County Fairgrounds in Wellington, Ohio on Saturday, during his first rally since leaving office.

Nord Stream 2, which is currently over 90 percent complete, aims to lay a 745-mile twin pipeline to transport gas from Russia directly to Germany via the Baltic Sea, passing through the territorial waters of Denmark, Finland, and Sweden.

Moscow views the US sanctions against the project as an example of unfair competition meant to boost US LNG exports, calling the pipeline a purely economic project that should not be politicised.

Trump’s remarks followed the former POTUS sending his “warmest regards” to the Russian president as Trump wished Joe Biden “good luck” in the run-up to the 16 June Putin-Biden summit in Geneva.

"As president, I had a great and very productive meeting in Helsinki, Finland, with President Putin of Russia. Despite the belated Fake News portrayal of the meeting, the United States won much, including the respect of President Putin and Russia", Trump added in a statement earlier this week.

The 45th US president was referring to the July 2018 bilateral summit in the Finnish capital, where Trump and Putin discussed an array of pressing international issues of mutual interest.

© REUTERS / Carlos Barria
Trump Affirms Once Again He Would Invite Putin to G7 Summit in US
The comments came after Trump expressed surprise during a campaign speech in Bemidji, Minnesota in September 2020 as to why anyone would criticise him for aiming to be on good terms with the Russian president.