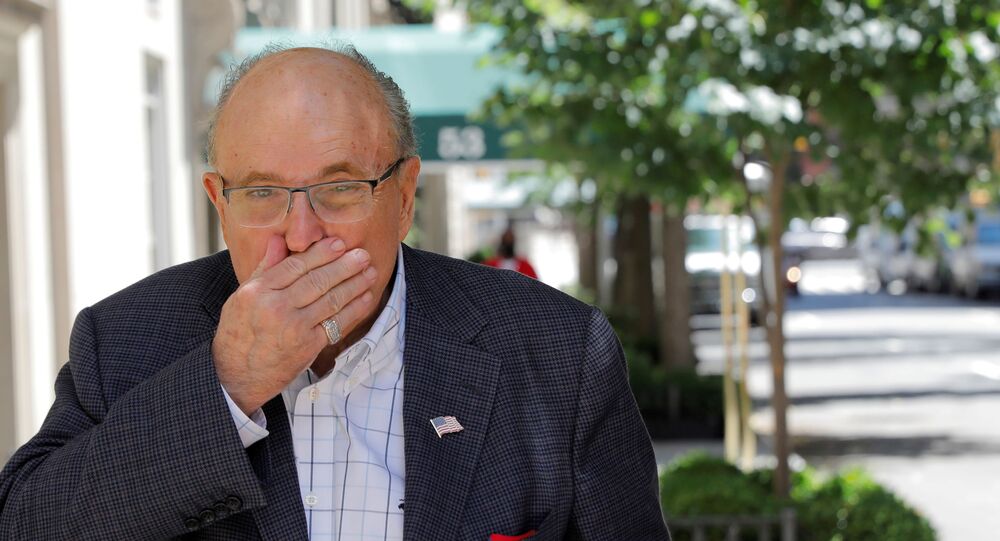 Former New York City Mayor Rudy Giuliani had his legal license suspended in New York on Thursday over his “false and misleading statements” about the 2020 presidential election results, which he claimed were rigged.

Rudy Giuliani was called a “f***ing a**hole” by Donald Trump’s top campaign attorney Justin Clark as the two clashed back in November over Georgia’s election results, a new book – "Frankly, We Did Win This Election: The Inside Story of How Trump Lost” by Michael Bender – claims.

An excerpt from the book, exclusively cited by The Daily Mail, suggests that the heated exchange took place on 13 November, a week before Georgia moved to certify election results in Joe Biden’s favour.

A number of US media outlets had already called the presidential election for Biden at that point so it was becoming ever clearer that Biden had won Georgia, Trump and Clark conveyed in the Oval Office with Giuliani on speakerphone.

The former New York City mayor then “claimed the campaign had been too slow to contest election results in Georgia,” the excerpt from the book reads.

“Clark explained that state law required results to be certified before a recount could be requested, which hadn't yet happened.”

According to the book, Giuliani then accused Trump’s top campaign attorney of “lying” to the then-president and the two started shouting at each other. This was the point when Clark allegedly said: ‘You're a f***ing a**hole, Rudy!'

Bender hints that Clark was apparently offended by doubts over his ability “to read Georgia election code” and stopped visiting the White House following the incident.

Giuliani has not confirmed or denied this narrative of events.

On Thursday, Giuliani lost his license to practice law in New York over “false and misleading statements to courts, lawmakers and the public… in connection with Trump's failed effort at reelection in 2020.” In the aftermath of 2020 presidential vote, Trump’s former personal lawyer extensively pushed for a review of the election results, which he said were rigged in Biden’s favour with the help of voting machines.

Giuliani's son Andrew, who is a Republican gubernatorial candidate for the state of New York, said that he was “infuriated” by the “politicised” decision to deprive his dad of his law license that was apparently made by five Democrat judges.

Georgia's election results were certified on 20 November 2020, proclaiming Biden the winner of the state’s 16 electoral votes.

As of 25 June, most pending lawsuits that were seeking to review Georgia’s Fulton Country’s absentee ballots from the November election for potential fraud were dismissed by Henry County Superior Court Chief Judge Brian Amero.