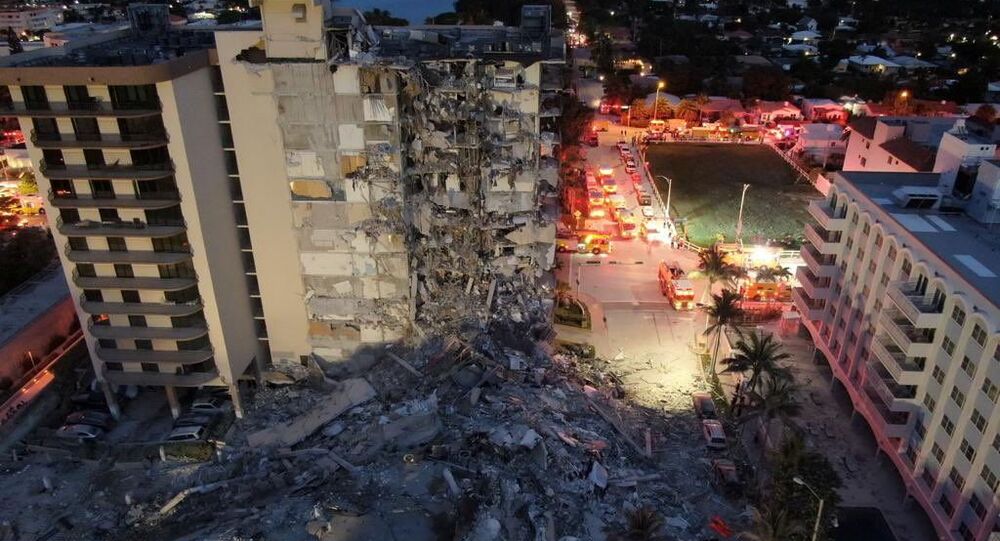 The authorities have not commented on possible causes, with Surfside City Commissioner Eliana Salzhauer stating that she wants to know why the tragedy happened and whether “any other of our buildings in town are in jeopardy.”

A video shared online by CBS 46 shows the very moment part of a 12-storey residential building in the town of Surfside, Florida collapsed early on Thursday, 24 June, leaving at least one person dead.

According to AP, dozens of survivors have been found by rescuers in the ruins, though Surfside Mayor Charles Burkett warned that the death toll may rise because the building was apparently "quite full" when the tragedy occurred.

"The building is literally pancaked," Burkett said. "That is heartbreaking because it doesn't mean, to me, that we are going to be as successful as we wanted to be in finding people alive."

NEW VIDEO: New surveillance video shows the moment when a Surfside, Florida building collapsed. 1 person has been confirmed dead and search and rescue efforts are ongoing at this hour. pic.twitter.com/wU7DAiosEF

​The authorities have not commented on the possible cause of the collapse but work was apparently being done on the building's roof – however, Burkett "said he did not see how that could have been the cause," as the media outlet put it.

"I want to know why this happened," said Surfside City Commissioner Eliana Salzhauer. "That's really the only question. ... And can it happen again? Are any other of our buildings in town in jeopardy?"