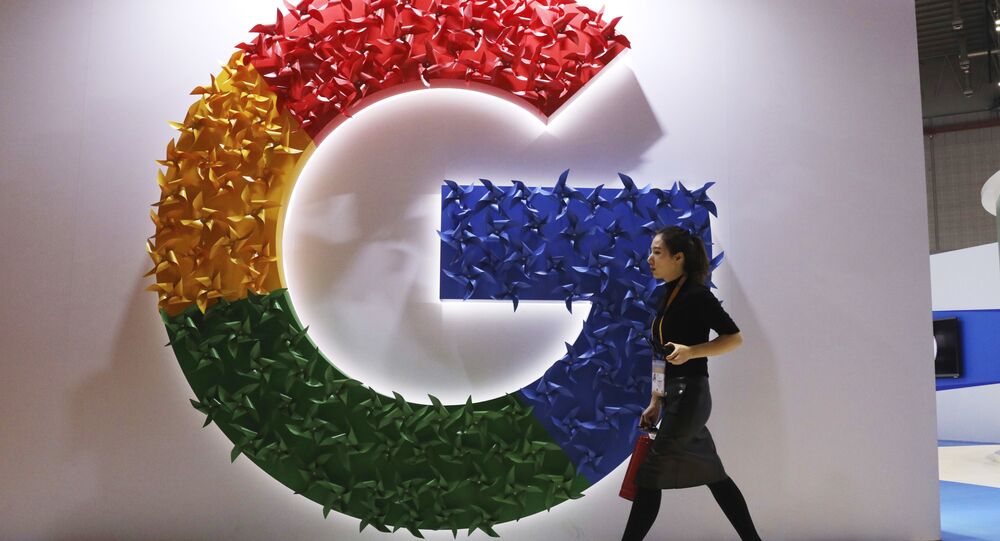 The hoarding of DNA samples and Intense interest in virology research recently expressed by private corporations, including Google, and even politicians has promptedconcerns as to how this sensitive information could be used and whether the parties involved are on a power trip, notes Wall Street analyst Charles Ortel.

On 19 June, The National Pulse dropped a bombshell about Google's involvement in the funding of virus experiments and research by EcoHealth Alliance, a non-profit. Its founder, British zoologist Peter Daszak, lately made the headlines due to his collaboration with the Wuhan Institute of Virology (WIV). Wuhan, China is believed to be the epicentre of the first massive COVID-19 outbreak.

Over the past decade Google.org, the tech giant's charitable arm, has funded EcoHealth's studies on bat flaviviruses, henipavirus spillover, herpes as well the threat of transmission of zoonotic pathogens from animals to humans. Some of those studies were also supported by USAID and the US Department of Defence.

While there's obviously nothing criminal about funding scientific research, Google's involvement has raised two questions. The first one was asked by "The Next Revolution" host Steve Hilton, who wondered whether Google's censorship of COVID-related news and theories stemmed from its involvement in EcoHealth's virology research.

The second question is posed by Wall Street analyst and investigative journalist Charles Ortel, who wonders why Google.org overlooked the fact that Daszak's non-profit was not properly organised: the entity's IRS filings are replete with apparent errors, while EcoHealth have apparently strayed far from its original authorised tax-exempt purpose, which was protecting wildlife facing extinction.

"EcoHealth Alliance – the 'tax-exempt organisation' through which government money was channelled – was formed to protect wild species threatened by extinction, and certainly not authorised, legitimately, to manipulate natural viruses so as to make them more dangerous for humans or other living creatures", Ortel notes, pointing to instances of "gain-of-function" research publicly discussed by Peter Daszak.

"Certainly since 2001, when Lois Lerner moved into a key position at the IRS, politically connected insiders have known that false-front 'charities' are excellent vehicles to hide criminal activities, especially when they operate abroad," presumes Ortel.

It appears that some elements in governments and multinational corporations are not confused at all when they discover fake charities like EcoHealth, as they "can be used to pay off corrupt politicians and/or to enrich bureaucrats and insiders," according to him.

In addition to virology studies, Google appears to be interested in other biotech research as well. In May 2007, the tech giant took a stake in California-based biotech company 23andMe, investing $3.9 million in it. Earlier in the month Sergey Brin, then-president of Google's parent company, Alphabet Inc. married Anne Wojcicki, a 23andMe co-founder.

23andMe is known for providing a direct-to-consumer genetic testing service whose declared aim is to help people to understand their genetic make-up and inherited traits. However, in 2013 Scientific American, one of the US oldest scientific magazines, presumed that 23andMe was nothing short of "a front end for a massive information-gathering operation against an unwitting public."

SA quoted Patrick Chung, a 23andMe board member, who openly stated that the biotech company's long game was not to make money selling kits, but to collect personal data: "Once you have the data, [the company] does actually become the Google of personalised health care," Chung told FastCompany in October 2013.

The Google-backed biotech company not only provided information about ancestry and inherited traits but also analysed data regarding genetic predispositions to various diseases, something which prompted friction between 23andMe and the US Food and Drug Administration (FDA) in 2013.

While the DNA testing market was undergoing its boom with millions of consumers sharing their sensitive genetic data with private companies, FastCompany revealed in 2018 that the Federal Trade Commission had launched an investigation into 23andMe handling personal info and sharing it with third parties. There were also growing concerns about the security of personal DNA data. In response to FastCompany's request, 23andMe's spokesperson declined to comment on any probe, insisting that it only shares DNA data "with researchers if the customer has consented".

"23andme held great appeal to those studying family history," says Ortel. "But failure to secure results of the many DNA tests they performed on willing subjects, or harvesting of these results for financial gain are dangers one hopes government authorities are investigating."

Meanwhile, in 2019, the Pentagon leadership warned military personnel against taking direct-to-consumer DNA tests over "negative professional consequences" and "unintended security consequences" and "increased risk to the joint force and mission".

In January 2020, CNBC reported that 23andMe had seen an unexpected DNA test sales decline. CEO Anne Wojcicki cited a number of reasons behind this including recession and privacy concerns.

One might wonder as to why Google is demonstrating keen interest in virology and DNA gathering not being a biotech or pharma company from inception.

"An original goal of Google was to organise Earth's information," the Wall Street analyst says. "There are, and will always be many viruses, so one imagines that Google researchers might be curious to catalogue these and ultimately track their course through the world population. If Google were on a power trip, and as new viruses hit, the company might be able to shape allocation of resources fighting viruses towards perceived allies and away from foes, theoretically speaking."

There could also be a political dimension to using such data: in 2009 then-Secretary of State Hillary Clinton specifically requested that American diplomats collect "biometric information", such as DNA, from foreign heads of state and senior United Nation officials, according to secret cables released by WikiLeaks.

Meanwhile, a private multi-national corporation with a vast amount of sensitive bio-information and little if any supervision from government and public regulators prompt concerns about how this data could be handled and what would happen should it end up in the "wrong hands."

Most fears are triggered about the possibility of "developing completely novel weapons on the basis of knowledge provided by biomedical research", as German biologist Jan van Aken and American biosafety activist Edward Hammond wrote in 2003.

"Such weapons, designed for new types of conflicts and warfare scenarios, secret operations or sabotage activities, are not mere science fiction, but are increasingly becoming a reality that we have to face," the researchers warned.

Yet another concern of international scientists is a "genetic biological weapon" which theoretically could target particular ethnic groups by homing in on molecular differences in their DNAs. In 2004 the British Medical Association (BMA) suggested in its report Biotechnology, Weapons and Humanity II that construction of genetic weapons "is now approaching reality." The bioweapon topic has been repeatedly touched upon by the media and scientific community over the past decade with various scenarios being presented.

Recently, experiments with viruses, DNAs and so-called "gain-of-function" studies which makes pathogens more deadly or more transmissible have triggered a renewed debate and calls for greater transparency in the aftermath of the COVID outbreak.

"In theory, use of bioweapons has been prohibited in the civilised world," Ortel says. "In practice, though, the regulatory regimes are not tough enough or swift enough to bring criminals engaged in bioweaponry to the tough justice they deserve. Life is precious and should not be curtailed by bioweapons, especially if these are funded with taxpayer money."

Live Updates: WHO Expert Warns About Vaccine-Resistant 'Constellation' of Virus Mutations in Future