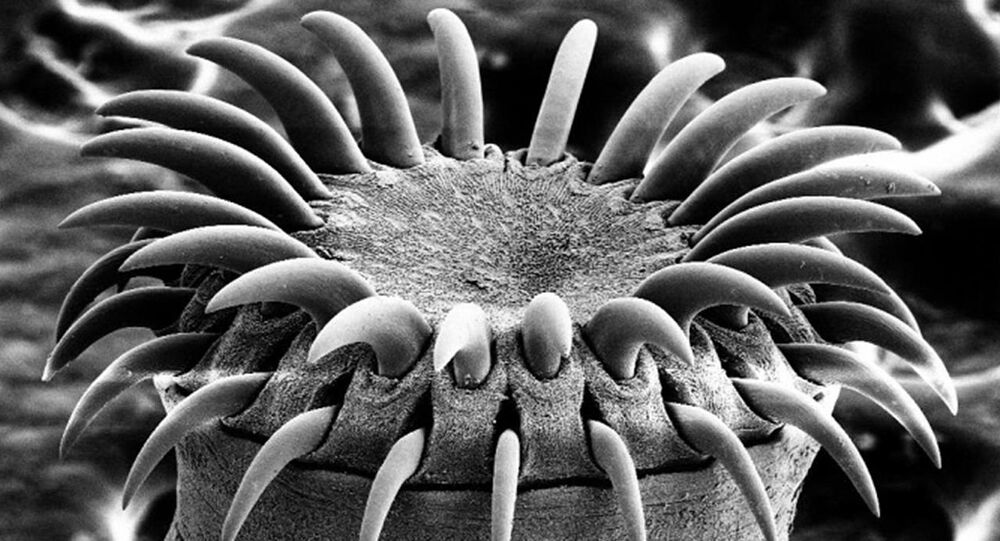 Tapeworms live in the intestines of some animals that become infected when grazing in pastures or drinking contaminated water. Although tapeworms in humans, regarded as "accidental" hosts of the parasites, usually cause few symptoms, they can sometimes cause life-threatening problems.

A rare and potentially fatal disease triggered by a worm parasite is quickly spreading across Canada, reported Gizmodo.
University of Alberta scientists have reported an alarming rise in cases of alveolar echinococcosis (AE) - a cancer-like disease that can be found in certain areas of Europe and Asia, albeit rare in humans. It was previously virtually nonexistent in North America before the 2010s.

The disease is contracted by consuming microscopic tapeworm eggs from eating contaminated food or handling infected animals. These eggs can implant themselves inside organs and eventually turn into lethal tumour-like growths.
The hosts for the worms are wild canines and domestic dogs.

© Photo : M, Jacquier, L Piroth (New England Journal of Medicine)
Above, the tapeworm cyst-caused lesion that caused a 35-year-old French woman to lose sensation and feel painful shocks in both her legs

A recent case review has shown that between 2013 and 2020, 17 instances of AE were registered in the province of Alberta, with anti-parasitic drugs used to treat the illness. This secondary approach is typically resorted to when surgery fails to get rid of the growth induced by the worms inside the body.

The parasites, found in both humans and animals, were likely brought over by dogs from Europe, according to the scientists.

“Why it is most apparent in Alberta, by far, at the present time, is somewhat speculative. I think some mix of factors of where the parasite was first introduced and/or favourable wildlife ecology are most likely,” Stan Houston, a University of Alberta infectious diseases expert and the lead author of the case review.

The scientists speculate that the rise in cases of this rare disease may be linked increased dog ownership in the area.

“Of course it could, and in fact, what we know so far suggests that the parasite has been remarkably successful, achieving considerably higher prevalence in Alberta coyotes than in its natural reservoir, the red fox in Europe. It is unequivocally new as a human disease in the Western Hemisphere,” added Houston.

The researchers advise washing your hands after touching dogs or other wildlife to reduce risks of contracting the disease.

S. Africa Discourages Use of Parasite Drug Ivermectin in COVID-19 Patients Outside Trials