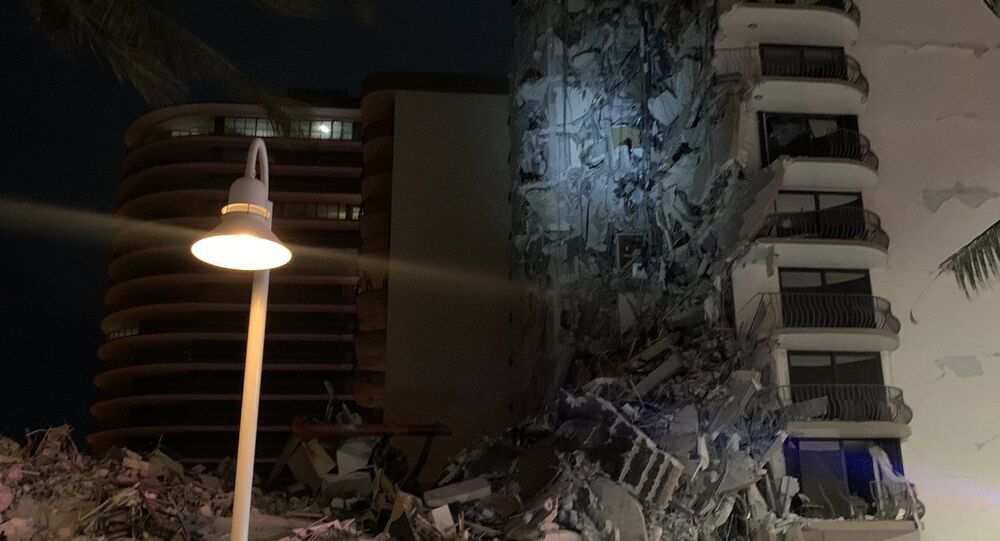 Emergency services rushed to the scene after an apartment building collapsed in Surfside, Florida, north of Miami Beach.

Over 80 rescue teams were sent to the site of the collapse of the condominium building.

A Miami-Dade Fire Rescue assistant fire chief said that two survivors were pulled from rubble, while there is no estimate of the number of people missing.

In total, 35 people have been pulled from the collapsed building, Miami-Dade County Fire Rescue Assistant Chief of Operations Raide Jadallah said on Thursday.

“Our units began search and rescue efforts, they pulled 35 occupants that were trapped inside the building and, in addition to those thirty-five, ten were assessed and treated, two were transported to various hospitals. Search and rescue efforts are still ongoing,” Raide told reporters during a press briefing.

Eyewitnesses report that the collapse occurred at about 1:20 a.m. and felt like an earthquake.

#MDFR is on scene of a partial building collapse near 88 Street & Collins Avenue. Over 80 MDFR units including #TRT are on scene with assistance from municipal fire departments. Updates will be provided on Twitter as they become available.

According to the CBS, a child was rescued from the rubble. The number of injured people reached nine.

MBPD and @MiamiBeachFire are assisting the Town of Surfside at a partial building collapse located at 8777 Collins Avenue in Surfside, Florida. Multiple police and fire agencies from across Miami-Dade are assisting. Please follow @MiamiDadeFire for updated information. pic.twitter.com/8tORIfZfjY

​The building was over 10 stories tall, according to the photos from the scene.