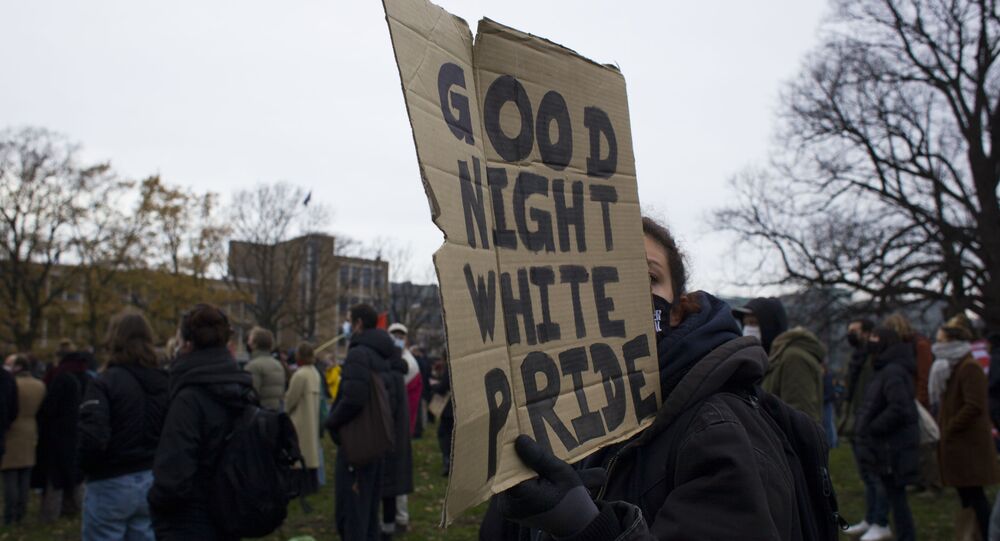 In recent months, following last year's killing of Black American George Floyd, issues of race and aggressive "anti-racism" initiatives such as critical race theory have dominated the US media, sparking heated debates between supporters and opponents.

After releasing a controversial video claiming individuals should feel "shame for being white" and calling readers to create "white accountability groups," the Washington Post has been labeled neo-racist and accused of supporting a pseudo-religious movement by social media users.

The Washington Post and The Lily's "The New Normal" video series, hosted by Nicole Ellis, debuted last spring with the goal of discussing the coronavirus pandemic, but after the death of George Floyd, it changed to issues of race.

The latest episode of "The New Normal," which aired on Friday, examined how white people can oppose white supremacy and "understand your whiteness and the ways that white supremacy benefits you."

"An antiracist culture does not exist among white people," Resmaa Menakem, a trauma specialist and author, said in the video. "White people need to start getting together specifically around race."

Menakem then said that the groups should meet and talk for up to five years, until they "end up at a community that is aligned with each other."

"[Groups] are really helpful in terms of having a place to process, having a group of people whose responsibility it is to call me on things, or to challenge me," Rebecca Toporek, a professor in the Department of Counseling at San Francisco State University, explained.

© CC0
WaPo Report Highlights 'Racist Legacy Many Birds Carry', Sparks Outrage Online
The host also spoke with trauma therapist Ilyse Kennedy, who said she had been a part of such a group and that it was critical for members to go through a "period of deep shame for being white and for acknowledging the harm that our ancestors have caused," and those white people "can't ask people of color to hold our hand."

Professor Toporek then stated that such efforts may be necessary to distance oneself from white supremacy.

"Part of the structure of racism... is to keep us from recognizing that racism is part of our daily lives," she said. "So it's a longer-term process of looking at your understanding of yourself in the world, both historically but also contextually. Also the family you live in, the community you live in, and what role whiteness plays in that."

"This is a very strange pseudoreligious movement that is likely to do more harm than good," US journalist Jesse Singal commented on the video on his Twitter.

In addition, Singal noted that one of the magazine's speakers, Menakem, is a preacher of somatic abolitionism, who offers "help" in eradicating the spirit of white suprematism in every person, for a modest fee of $350 a day.

3/ One of the WaPo sources is Resmaa Menakem, a proponent of Somatic Abolitionism, which holds that "Nearly all our bodies -- bodies of all colors -- are infected by the virus of white-body supremacy." Luckily, his trainings ($350+/day for "white bodies") offer hope for treatment pic.twitter.com/Ouyd2nxLg2

Renowned activist and writer Christopher Rufo, who is a critic of the now popular critical race theory, said that whereas he is against any form of racial supremacy, "the Washington Post wants to install it everywhere."

"The game is that they want to create an essentialized racial category ("whiteness"), load it with negative connotations, then impose it on individuals through guilt, shame, and school indoctrination," he wrote on Twitter. "This approach is reductive, manipulative, and malicious. Don't fall for it."

​Black human rights activist Ayaan Hirsi Ali, among many others, called the show's episode "toxic, from start to finish," while noting that such discussions are moving society in the wrong direction.

Toxic, from start to finish. We are going down a terrible path. We have to persuade these people to come back to sanity. https://t.co/guwU6SYHtT

these activists are literally asking white ppl to form whites-only "accountability groups" to meet regularly and indefinitely ("lifelong project"!) to talk about the power of their whiteness and this is supposedly a strategy to IMPROVE racial comity and integration

These views are legitimately harmful and backwards. They shouldn't be normalized and they certainly should not be forced on young kids via public education that is funded by taxpayers. Parents have every right to be concerned and want to step in.

​In late April, US President Joe Biden in his first joint address to Congress has named white supremacy a domestic terror threat against which the United States must be vigilant. He also claimed that white supremacists now pose a bigger threat than any other kind of terrorism in the nation.

Biden's words were echoed by many law enforcement and other federal authorities, noting that the fight against racism and the achievement of diversity and equality for all groups of citizens is a priority goal of the administration.

Supporters of critical race theory and anti-racism lectures argue that they are crucial in order to show the level of racism that Black Americans suffer in practically every aspect of their lives. Opponents argue that those beliefs themselves bolster black-and-white thinking and only serve to further separate people, while lacking concrete solutions for racial issues.